Hi, I am wondering how many bike packers there are around the Sussex area? I am keen to try bivi a month this year and would welcome some company. If all goes well I plan to get 1/12 next weekend - the 12th or 13th Jan - rain hail or shine. Simon
Top

Unfortunately I can’t make this weekend having got my BAM on sat in the Surrey hills. I would definitely be up for future months and riding some of your Sussex trails - where would you be riding?

Hi Ben, Thanks for getting in touch. I live near Brighton and usually ride / bivi anywhere between Eastbourne and Amberly. I know this area quite well. I am also planning to explore more of the South Downs Way between Amberly and Winchester this year.

Keep me posted if you are going for a bivi in Feb. I will do the same. Simon
Top

Family duty calls, and so my BAM month plan for 1/12 this weekend is out the window... And so is my New Year's resolution.. thanks to a nice bottle of red my wife just bought home... So much for a dry January..
Top

I live in Hove and am keen to get more into bivvying on the south downs.

Hey Simon, I’m in Lewes and regularly ride the section of SDW and others between Lewes and Brighton. I’m still getting the core of my kit together but would be up for joining a little later on in the year.
Top

Hey Billy and Gordon! Great to know there is a bivi scene in Sussex. Really keen to meet up for a bivi or a ride. I usually ride every Sunday morning around 830am from Ditchling with a mixed crew for a leisurely 15-20 miles up and over the downs (easy going, very mixed fitness levels). Please join. As for the Bivi, I am now officially doing BAM, having just completed 1/12 on the 31st January (close call).. I ended up having to commute to work fully loaded, then planned to go for a solo bivi near work, just to see what I could get away with in a woods near Haywards Heath.

In the end my 11yr old son saw me packing and wanted to come - which was a pleasant surprise. So I ended up doing a bivi right near home (Ditchling Beacon) and wife dropped the boy and bike at the top of the hill around 7pm.

"Not the warmest night dad" .... I felt guilty as he was in a 3 season bag in wet clothes and I had the full winter kit, but he slept through and didn't complain.. thankfully, as I was only just warm enough. I also tried out a DD tarp in a pyramid shape, which worked but would not have survived a downpour. Hammock is the only way to go when solo as far as I am concerned.

So, February Bivi a Month plan, for me, is currently either Saturday 10th or Sunday 11th, let me know if either work for you.. I'm doing the Wiggle Southern Rough Ride near Arundel on Sunday 11th and hope to combine a night or two on the downs. Would be good to have some company. 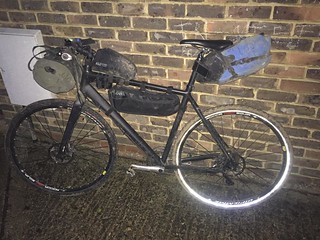 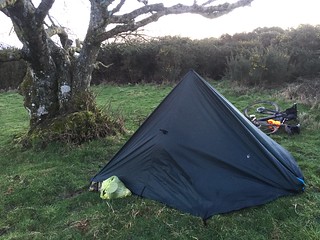 I’d be up for tagging along for a ride one Sunday. The next few weekends are a bit chaotic but if I can wangle a free pass for the better half I’ll definitely come along. In fact, I’m having conversations with the peeps at Lewes Cycleshack about resurrecting the mtb club rides I used to organize/lead.

BAM looked fun. Kudos due to your son for giving it a shot. I’m slowly indoctrinating my 6¾ yo into the world of bikes and bikepacking. The current strategy is to reward any outing with hot chocolate and toasted marshmallows. It seems to be working…

I won’t be able to make Feb though, I’m still gathering kit together. Let’s chat over a Sunday Service ride soon!
Top

I cant make this weekend but would be interested in March.

Have a good one
Billy
Top

I'm not commiting to Bivi a Month this year (last year I gave up in May, just as it was getting warm/dry), but I'd be keen to join you guys.

I'm based just outside Haslemere, so the other side of the Downs, happy to show you guys around up here or travel down your way.
Top

Registering general interest! I'm up near Redhill and would be interested.
Top

BAM 2/12 done. I was up in Dartmoor for a few days and had a 2 night bivi in a new bit of kit.. I finally bought tent for mid winter outings. Much prefer the comfort of my hammock, however, it was nice to be cocooned from the weather.

Glad to see a few more people are up for a Sussex Bivi.
March is just around the corner!
Suggest a date anyone? 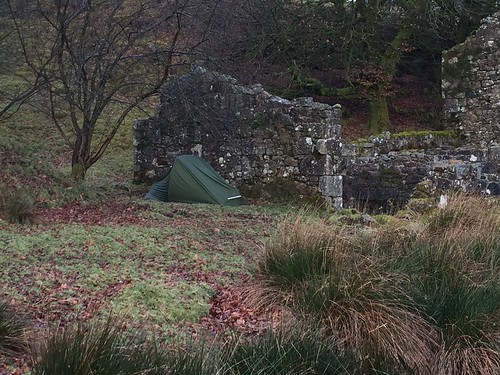 I call a Sussex Bivi tomorrow night!! Heavy snow forecast. I know a perfect little valley likely to get a big snow drift. I’ve met the owner and have permission to build a decent fire. Just a 10m ride from Brighton up in the Downs. Just shout if you’re keen to join.
Top

I’ve met the owner and have permission to build a decent fire.

Whoa, nice! Keeping my fingers crossed this wasn’t a one-off opportunity. How was it?

I’d have been really keen to tag along on this one but I’d need a little more notice to be able to chip along, our household operates by a strict calendar regime, unfortunately.
Top

Was great, and no, it was not a one off.. I'm in Scotland for my April bivi (bothy) but if you can suggest a date for May?... we can get Sussex bivi on the boil..
Top

I'm in worthing and there's a group of us who BAM too, I've annoyingly managed to mis one as I broke a rib and I was up to 15 in a row, grrr!

I'll try to remember to keep an eye on this thread. Anyone getting one in before the end of March?

I'm another Sussex mountain biker who has dabbled in bikepacking, and looking to do some more.
Probably not up for bivi-a-month, as the prospect of being out in all weathers isn't massively appealing.
A few of my regular riding buddies are looking to get out a few times this year, with our provisional date for the first ride being at the beginning of May.
I'll keep an eye on this thread, in the hope that I/we can tag along on future adventures.

P.S. Is your snowdrift valley at the back of Woodingdean? (I always enjoying riding over that way, as it's so quiet and peaceful, despite being so close to civilisation)
Top

Tagging along with this thread to keep an eye on it and who does what and where. Angmering based, so know the Downs quite well around the area.

Plans for an SDW (single) attempt later this year so need to get some kit testing done.

Nice to know there's a small scene down here

I'm freeing up at work and feeling the need to get out but April already seems to be disappearing! Friday is the OHs birthday, next weekend I'm at a wedding- where does the time go?
Top

Hey, nice to see more activity and interest in a Sussex bivi a month. My plans have been scuppered through injury. I had to take March and April off the bike. I still managed a few bivi's, but was just hiking. Now getting back on the bike slowly and looking to resurrect my BaM plans. Please shout if you are planning a Sussex bivi, I hope to join!
Top

Finally managed a trip out overnight, camped out a little bit west of Kithurst Hill along the South Downs Way.

Beautiful sunset and also a beautiful sunrise.
My first one ever, but it definitely won't be the last, I loved it.
Top
Post Reply
33 posts