I’m sure some of you have seen the wildcat posts on Facebook recently about Mr Barrington being in Finland.
He’s booked himself in for the 300 this year.
If anybody’s interested you can follow the hardy souls/loons on trackleaders,

Super! Didn’t realise they (ie the race) were using track leaders (is it a first), so I’ll be tuned in for this week and the next few days after

I knew Ian was doing it but when I looked at the list of entrants there were a couple of names I recognised (as will you Phil).

Will Robertson who was fourth on the 150 last year is doing it.

Contantijn Weber was one of the presenters/instructors on the training camp in Geilo the other week.

Réné Albisser was the guy I rode with to the finish on the Rovaniemi 150 three years ago.

Marco Vitti was riding with Maurizio Doro on the 300 last year.

On the 150 there's Jean Yves Even on foot who came second (on a bike) on this year's Fat Viking.

I think when Ian did the 150 a few of the riders had trackers because I remember it was one of the first spot watching races I'd seen.
Last edited by whitestone on Mon Feb 17, 2020 8:46 am, edited 1 time in total.
Better weight than wisdom, a traveller cannot carry
Top

Minus 14 here this morning, but warming up to above zero with snow flurries by tomorrow night. Going to be interesting conditions to race in.
.Wildcat Gear | Shand Cycles
Top

Looks like the early part of the route is fast - the first few riders were at CP2 quicker than I got to that point when doing the 150 last year but they are carrying extra kit and food as they aren't allowed to restock anywhere along the route*. There's no way anyone would be doing 16km/h along Sinettajarvi lake in last year's conditions. The leader won last year's 150 in 12hrs so is pretty quick.

Some of the trackers seem a bit intermittent (apart from the river and lakes the route is in forest) so I wouldn't worry about lack of updates.

*This is really cruel as they do a circuit around the outskirts of Rovaniemi but aren't allowed to visit the shops!
Better weight than wisdom, a traveller cannot carry
Top

Do remember setting up an individual tracking page for it
http://singlespeedsimon.wordpress.com/
Top

Do remember setting up an individual tracking page for it

Will Robertson lives just down the road from me but I've yet to bump into him. -14? Sigh.... I'm off out into +8 and heavy rain
PS, its a weekend earlier this year isnt it?
http://philsbikepacking.blogspot.co.uk/
Top

Phil, I think the majority of the waypoints are laavus. If they are then it makes sense to have them as points of interest. Looking at the rules, the four after the end of the 150 are to ensure riders keep to the river. Also waypoint 29 onwards are on the 66km route. Simon should be able to confirm about the laavu/waypoint connection.
Better weight than wisdom, a traveller cannot carry
Top

yeah there are a lot of checkpoints but think it works out on average 1 every 10km, I know it gives the race organiser some peace of mind

I think the majority of the waypoints are laavus

Most of them are, although some of them are after some dangerous sections (for want of a better word), where the rider may have exited a water feature or through known section of soft snow

According to the wifey (via facebook), its starting to snow, so progress will slow down.

Good to see Ian doing so well, he'll be battling it out with the 150 crew with his times. Also on a personal note, good to see Tobias doing well too (3rd), he's a great athlete and is a very focused person. He finished in 2017 in 2 days 13 hours, no doubt he'll be out to beat that!

God dammit it, I miss this race. Roll on 2021...
http://singlespeedsimon.wordpress.com/
Top

Having told my self I wouldn't do it again, I do sort of echo your last comment Simon.....
http://philsbikepacking.blogspot.co.uk/
Top

Looks like Ian spent about fifty minutes in the hut at Kuusilampi. Since he'd another 220km to go at that point it's no bad thing. Probably worth stopping a while at the Porohovi checkpoint since that's the last one on the 150km so he might as well take advantage of the fire - I only caught the 2017 winner of the 300 race there as that's what he was doing. I quite like CP7 as it feels properly remote.

The other guy at CP7 is the Swiss guy I managed to beat in 2017, Réné Albisser.

The SPOTs seem to be playing up a bit - quite a few aren't updating for maybe an hour at a time. There's also a few that don't appear to have started. Marco Vitti came second on the 2017 Rov 150 and Constantijn has done a lot - probably a user failure to hit the "go" button. In a way it's a pity the 150 riders don't also have trackers so you can see the "traffic", an extra cost and hassle though.

Edit: Meant to ask. Simon when you did it were you allowed a drop bag at the 150km mark? I noticed it in this year's notes for the 300 and can't recall seeing it before.
Better weight than wisdom, a traveller cannot carry
Top

Saw Ian's Strava activity... man, I still really want to do this one day if I can get fit enough again.
Top

Is this some sort of safety net (by the organiser) to ensure everyone has all the gear for survival in such conditions without thinking about shops on a 150km??
Top

Shaf, on the 150km route there are no shops. It's so empty It makes the BB200 look like a circuit of Meadowhall

The rules for the 300km route say you can't visit any shops or cafés as you go past Rovaniemi. The rules https://www.rovaniemi150.com/roi300/rules/ also say you can leave a bag with the organisers and it will be placed on the route at 150km for you to pick up. This is similar to the Iditarod Trail race where there are three such drops but in that case there's a weight limit for each bag.

Once you go beyond around 150km then these races are about surviving in the terrain first, riding a bike second (or maybe third).
Better weight than wisdom, a traveller cannot carry
Top

Still going. Kuusilampi section was v tough with fresh snow fall during the middle of the day. Punctured just before Porohovi 2. Got a bit of a twinge in my knee, but nursing it round. Not done yet!
Riding with Tobias, too.
.Wildcat Gear | Shand Cycles
Top

Thanks for the (1st hand) insight Bob... Well done Ian (you're nuts off course)

Meant to ask. Simon when you did it were you allowed a drop bag at the 150km mark? I noticed it in this year's notes for the 300 and can't recall seeing it before.

First year for the bag drop.

Cracking pace from Ian, the next river crossing is tricky. Best done (by all accounts) in daylight, so a smart move there by Ian.

Looks like the lead rider will finish today, seems to be a non-stop effort

I was just heading to bed when I posted before so thought I'd expand a bit.

Firstly Lapland is big - 100,000 sq km which is the same size as Scotland and Wales combined and not many people live there, just 180,000, or about the population of Ipswich. Add to that a third of the population live in Rovaniemi itself and you can see that there's not a lot of folk out in the countryside.

The Rov 150 has checkpoints, mostly at laavus which translates as "lean to" but they are a sort of open sided shed with benches and a fire pit in front. Some of them are temporary tent/tarp setups just there for the race. The one in the photo below isn't on the route but gives you an idea. 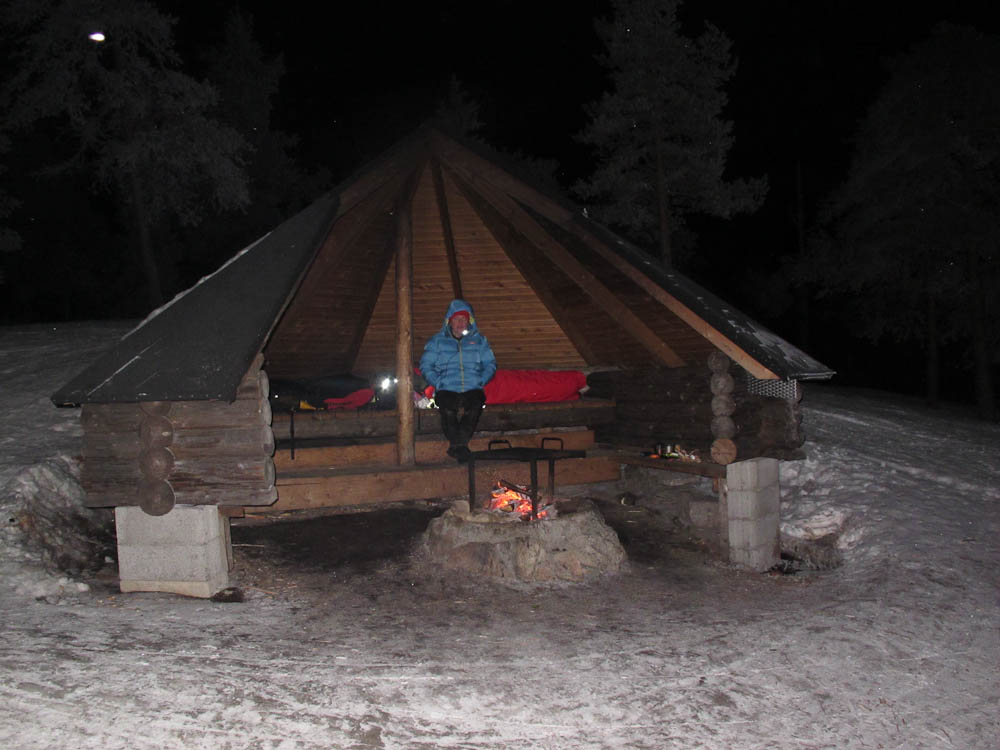 Those later along the (150) route also have an extra shelter with a sleeping platform so if you want to get your head down for an hour or two you don't have to bivy out by the trail.

On the 150 you have to sign in and out of the checkpoints. There's a fire at each with cold and hot water but no food. You are expected to have all your food with you for the race.

The second half of the 300 route has waypoints, for these the competitors just have to get within 50 metres or so and ensure that their tracker logs it.

On the 150 there are snowmobiles patrolling the route and checking up on competitors, in fact the route is prepared by snowmobiles creating the track you ride on. On the second half of the 300 it's not patrolled but there may be snowmobile tracks from whoever's out in the forests, these may or may not be useful.

Anyway if it snowed yesterday the tracks today will be slow going - looking at the dots 4 & 5kmh seems to be the current average. That's another 20hrs or so for Ian.
Better weight than wisdom, a traveller cannot carry
Top

Good this. I had a chat with Alex (Race organiser) last year about using spots and apparently the accuracy is poor as the satellites are too far south to get accurate fixes.
http://philsbikepacking.blogspot.co.uk/
Top

I'd like to do the 150, maybe further one day.
But.. have never been able to justify a fatbike.

My 29+ (3" tyres on 52mm rims) is plenty good enough for ~80% of the snowy/wintry riding I do around here BUT I'd not risk it on something like that (especially in the changeable conditions of recent years).

It's right at the top of my list of events to do and you can sure that I'll be taking my full-fat behemoth (5" tyres on 90mm rims)*.

For something like this you can never have too much tyre. In 2019 on a plus bike you'd have only been able to ride the first and last 11k, and the road sections (around 25k)
http://philsbikepacking.blogspot.co.uk/
Top
Post Reply
55 posts