Breakfast with a view.

Breakfast with a view.

I've had an idea!

I had been inspired by the Bivvy a month challenge and though I'm not yet a fully fledged bivvi-er I had plans to continue finding my way by bicycle to camp sites and practicing the fine art of TLS over this winter.

I'm reliably informed that that's no longer allowed, and with naught but a yarden the idea of a literal back yard bivvy is most unappealing.

So this morning before setting up working from home, I rode up the closest hill and had my morning brew. Tomorrow I think I will have a brew and breakfast. It was blummin lovely, and I anticipate I will do this a bunch providing the weather isn't completely biblical. There are a few breakfast-able spots around me and I'm on the lookout for a "practice" tarp of sorts so I can create a little shelter if its raining.

If anyone else is so inclined to share their breakfasts with a view, please do! 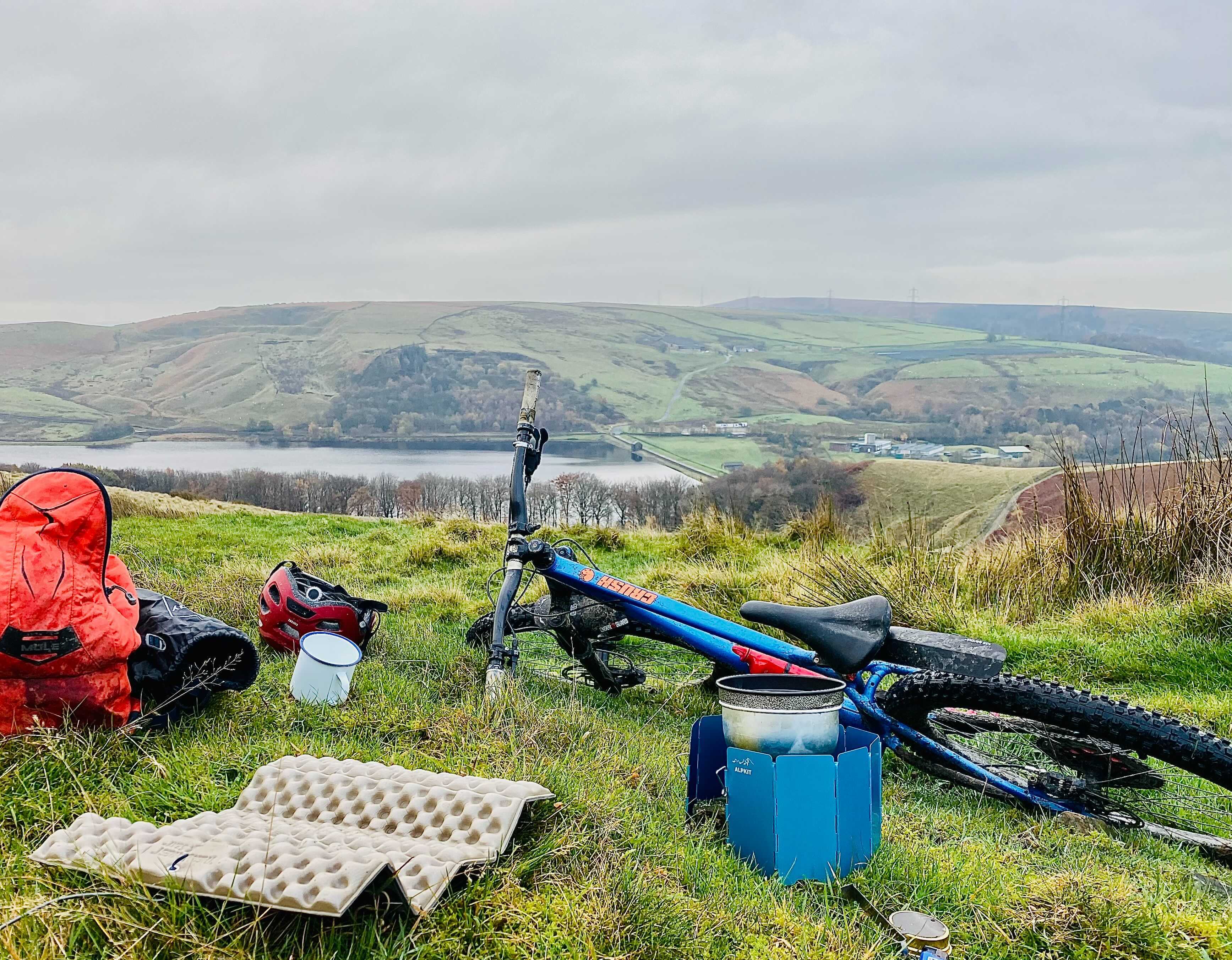 Great idea! Sometimes I need a "reason" to get out, however contrived it may be, and this is as good as any, but probably better. I'll try and get involved soon.
Top

thenorthwind wrote: ↑
Thu Nov 05, 2020 2:42 pm
Great idea! Sometimes I need a "reason" to get out, however contrived it may be, and this is as good as any, but probably better. I'll try and get involved soon.

You've sussed me out! I really didn't want to get out of bed and go and get cold this morning, but turning it into an event of sorts was just the extra little kick I needed. Something to do over the next few weeks isn't it!
Top

Good idea. I ride most Sunday mornings with a mate or two and we sometimes turn it into a breakfast ride. I might try and do a mid-week one on the strength of this. I’ll post up here if I succeed.
Top

I got really luck this morning...!

Great idea, I was thinking much the same before reading this, look forward to seeing the pictures and stories.
https://www.instagram.com/zimberella11/
Top

Grim misty start this morning. Brightened up so stopped for a brew and a flapjack:

Breakfast with a view

IMG_20201107_075557 by Verena Zimmer, on Flickr well I picked a fine morning for it! Still, who doesn't like a view of sheep in the fog?
Inspired by the comment on the BAM thread about making breakfasts more interesting, I had planned on adding some smoked salmon to my scrambled egg (posh). It was already in my bag when I had pangs of guilt, knowing that I had pinched the last slice, so no bagel with cream cheese and salmon for my daughter for lunch, so I took it back out and replaced it with a couple of mushrooms, and off I went on my standard local route. After a while I realized that in my excitement I had left my water behind. Well that made my choice of breakfast stop easy, somewhere with a stream. Cwm Gwdi it was, very nice too.

IMG_20201107_082454 by Verena Zimmer, on Flickr
It was only when I unpacked that I realized I had also left my coffee behind, what a donut. So it was a lovely cup of freshly boiled hot water, scrambled eggs and mushrooms.


Nice one! I think some mushrooms are on the menu for tomorrow. Unfortunately I don't have enough knowledge to forage through the mountains of them that seem to have sprouted up overnight here, but I shall buy some in the spirit of the situation!
Top

I've breakfasted (heh) outside every day this week. But this morning was a special one as yesterday my new tarp got delivered.

What better way to test these things out with minimal risk than a leisurely sausage butty on a hill in the Pennines? I've never so much as considered tying any type of knots previously - shoelaces are about as complex as I've ever got. Never the less, last night I taught myself a few basics. Armed with that and a sudden mis-placed self confidence, out I headed. 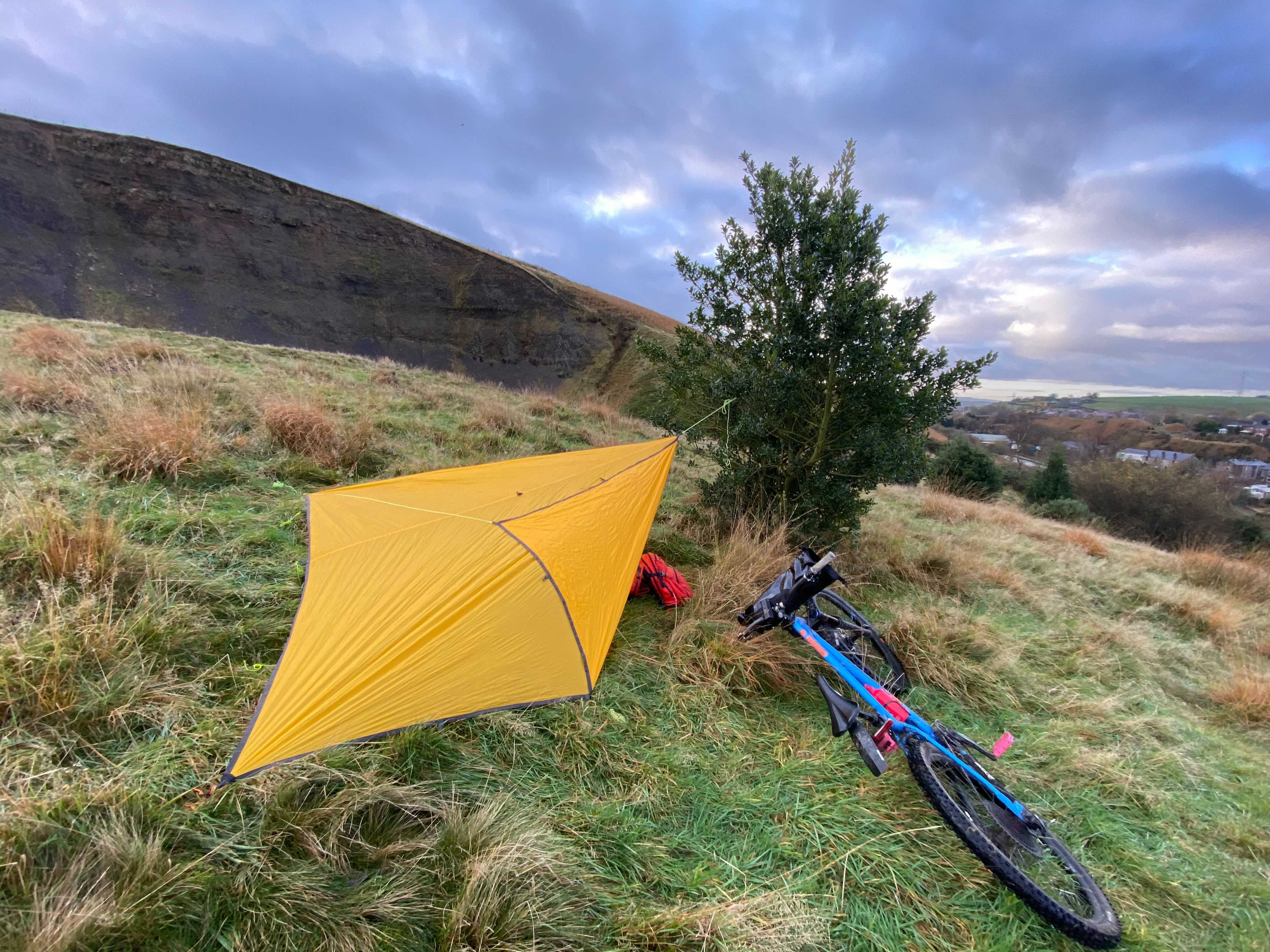 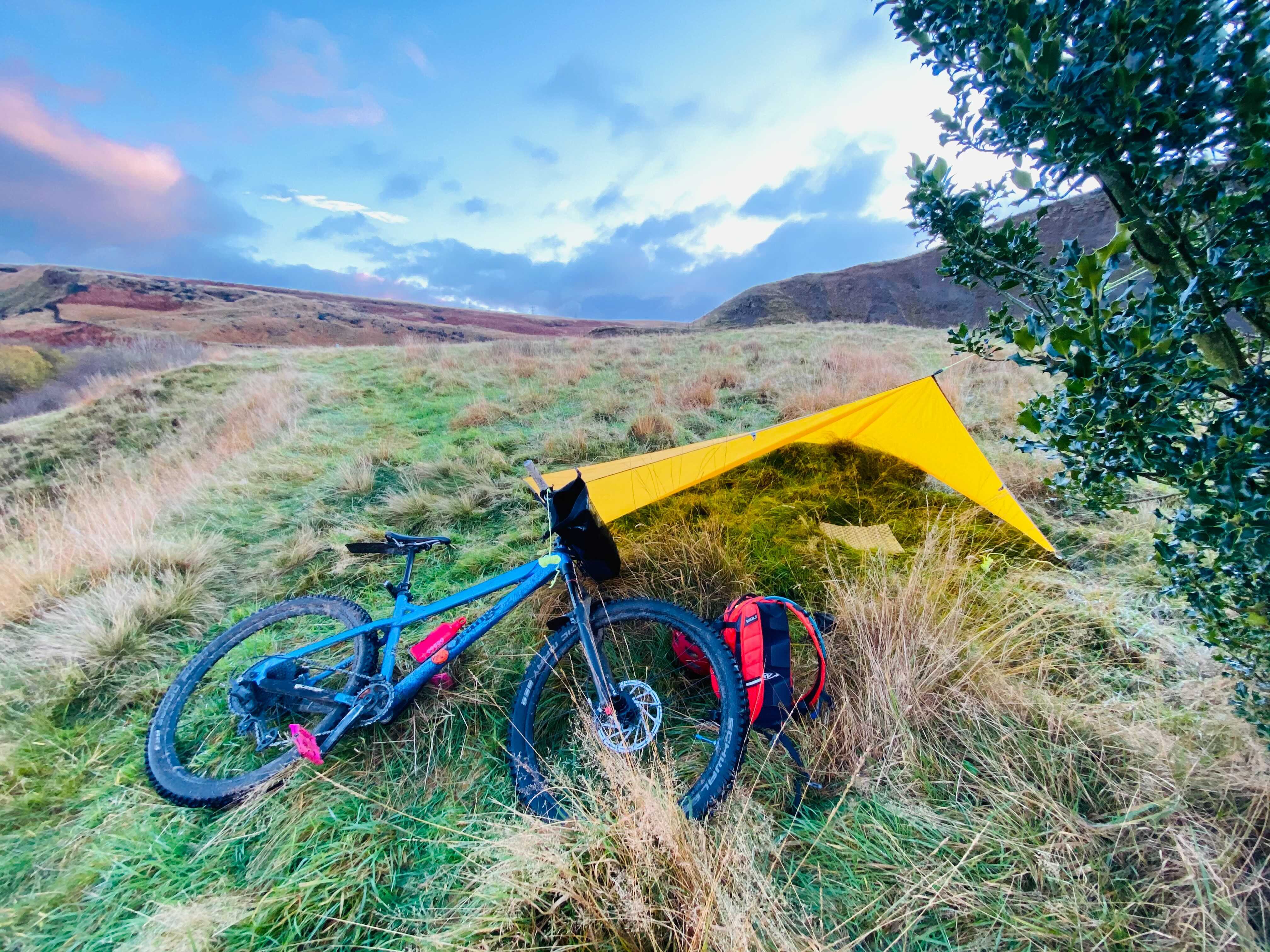 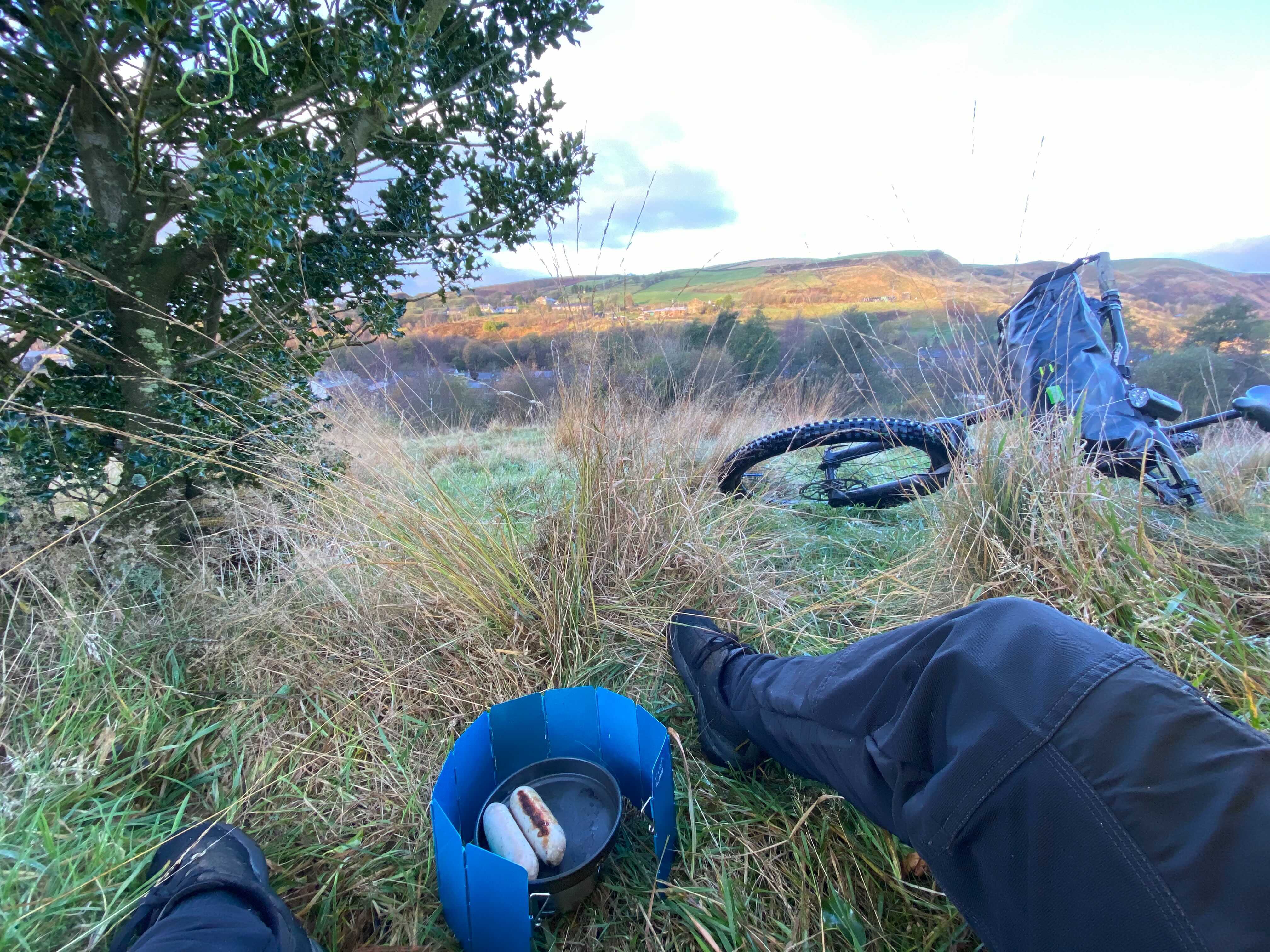 It rained for about five minutes, I didn't get wet. Result!

Special thanks to BBer Shewie for the speedy delivery of aformentioned tarp. It will be used well! What once felt like a dark art is now feeling a bunch more accessible.
Top 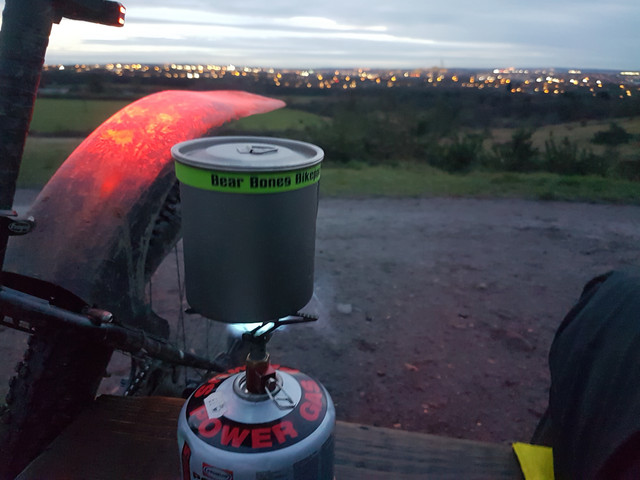 Not a great view, but it's a start. Just the hill (slag heap) in the country park (old colliery) about 5 mins ride from my front door. Not the nicest morning either, but at least it was mostly dry and mild.

Just a coffee too. Nice to just chuck the stove, etc. in a little rucksack and not worry about packing light/compact.

Need to set off well before dawn if I'm going to get much further and get back to start work at a decent hour.
Top

Almost got a sunrise this morning! 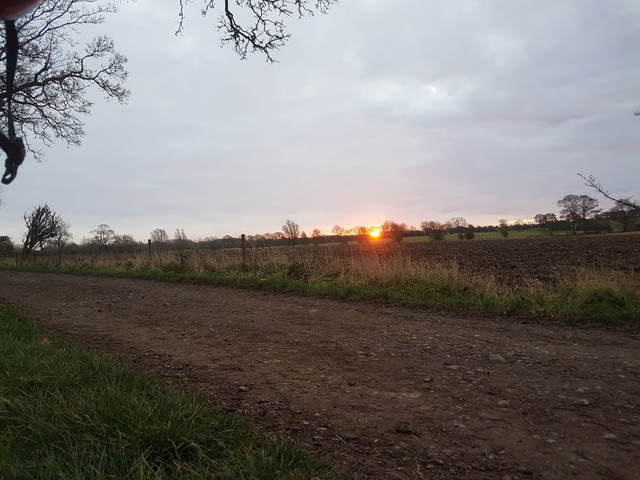 Does brunch at the river count?

Well, my gravel bike was still in the boot of my car this morning, freshly serviced and collected yesterday. It was a crisp frosty morning, and I am fortunate in having a daughter who has an early morning cleaning job at the Brecon Beacons National Park visitor centre (those of you who did the BB200 would have ridden past it), so it was a golden opportunity not to be missed for a breakfast with a view. Literally golden, as the skies were turning into stunning shades of pink and gold as sunrise approached, so I saved myself some time, got a lift with her in my car, and started riding just as the sun was about to rise.

IMG_20201206_081842 by Verena Zimmer, on Flickr
The riding was hard going, as I just had to stop about every thirty seconds to take another photo, as it was just absolutely jaw droppingly beautiful.

IMG_20201206_082058 by Verena Zimmer, on FlickrEventually I forced myself to keep going for a bit, till I reached my chosen breakfast spot.
I unpacked my things and put the coffee water on, real grounds, I think some of you call it cowboy style, I call it turkish style. For food, I had planned a nice little fry up, two rashers of bacon, and egg, a couple of mushrooms, and much to my delight I had found two leftover potato wedges and a bit of tomato in the kitchen in the morning, which I'd chucked in to make it even better. It then turned out that my phone battery had gone flat. I was briefly a bit upset, as the vistas were probably among the most instagrammable ones ever for me.... then gave myself a mental slap and reminded myself that that is not what I/ we do this for

. So instead, I just drank in the views all around me. Which was just as well, as it turned out there was not much happening stove wise, as my gas was running out. It just about managed a passable cup of coffee, but no sizzling bacon for me

.
Never mind, I packed it all up again, and it will have another chance in the morning, as I will head out for a bivvy later.