Re the souvenir ..... I do hope I've not raised expectations too high. T'is not much, but a thoughtful thing. Just saying.
I'm just stepping outside ...
Top

You should know us better than that by now Tim - sounds like the classic BBB type of memento :)
"My God, I'm two-thirds of the way to the grave and what have I done?" - RIP

Really sorry about this but I can’t make it, my wife is away and my parents who were going to look after the lad have an auction on.
Gutted, I’d already cancelled the run to the sun for MrsD

Any other last-minuters out there? C'mon on in, the water's lovely. Except there won't be any water cos there's a useful break in the wet weather

Just to confirm the old Alien will be in attendance, finalising my cheap arse kit over the next few days so you can all say...Ooh, Aah and snigger quietly behind mitted hands. See y'all at Tring station.
Top

Rather than litter the BAM thread with my rantings and pix I thought I'd leave these here instead.

Regular readers will know the idea was hatched months ago to find a route between three pubs, the Red Lion, White Lion and Black Lion. Reg put a plan together, though that quickly fell apart as we largely followed our noses in the general direction of where we wanted to go. Reg and Sam will no doubt post a few pix as well.

As a momento of the occasion, my girlfriend knocked us out a few beer coasters with an image I found on the internet. They went down very well with the lads, so well in fact we kept forgetting to take them with us as we left various pubs.

A highlight of the day was chancing upon a group of riders dressed as pirates, riding unicycles, Choppers and Shoppers. Their's was an annual pilgrimage from somewhere to somewhere else, which sounded fun apart from the unicycles Coppers and Shoppers. Sam was very interested in the one-wheelers and accepted a challenge from one of the pirates to have a go. I imagine they've done this a few times and expected him to fall flat on his bum. Hence their guffaws of surprise when The Old Alien gave them a quick demonstration of how it should be done. He denies it, but I suspect Sam was brought up in a circus. Ask him to stand on the top step of an unsupported step ladder and peer into a 10 foot hedge, and you will agree.

We got to the Black Lion in Leighton Buzzard about 730pm IIRC, but headed up to the local Wetherspoons for a meal. LB is a decent enough town, but it is exactly overflowing with eateries, and none of us felt like the Turkish place, which did look ok. Still, it was tasty and filling and good value. As Sam said, how can you complain when you buy three pints of decent beer and get over £2 back from a tenner? Stomachs filled, we headed back up to the Black Lion for a final pint and photo.

Then onto Reg's bivvy spot which was just perfect. Nice and flat, bone dry despite all the recent rain, and ample choice of trees to hang my hammock from. Unfortunately, I chose badly. The trees were just that little too close, so my hang was a bit too steep, and having the gather in the lines did something weird to the shape of the hammock. I didn't let it stop me sleeping like the dead though. Which I did. We were all up and gone by 7am, with Reg having just a short ride home, Sam grinding out another 20 miles back to Princess Ris, and me meandering along the canal back to Tring and my car. I got there just as the rain kicked off, making me very glad hadn't stopped for a brew in one of the local cafes.

This was a real classic Boners weekender. Great company, a really fun route, heaps of banter and nothing taken too seriously. Freaking love my BearBoner chums. Cheers guys. 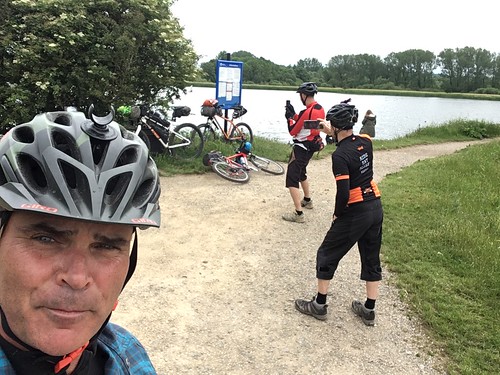 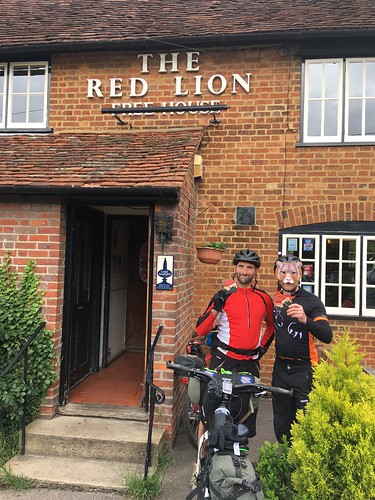 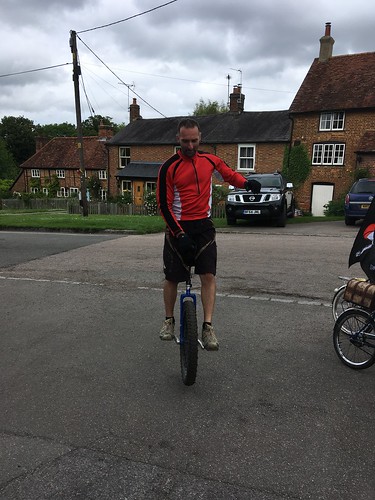 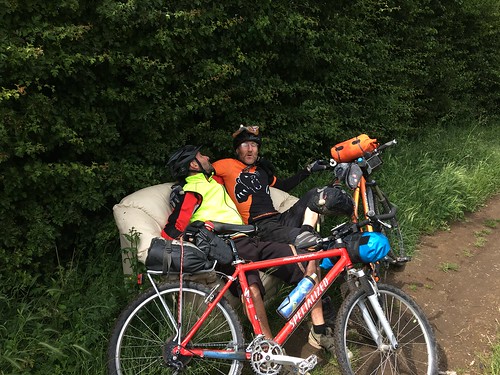 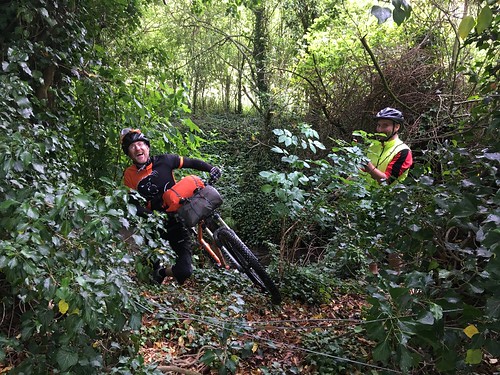 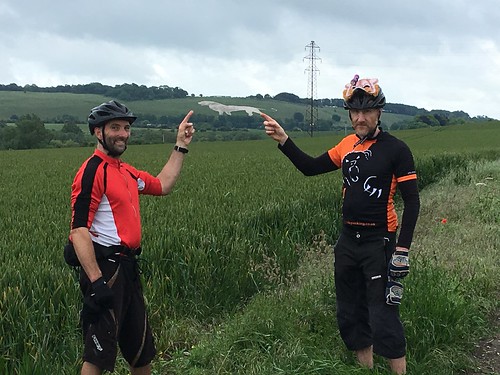 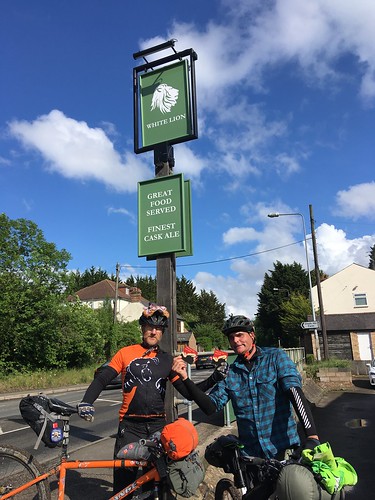 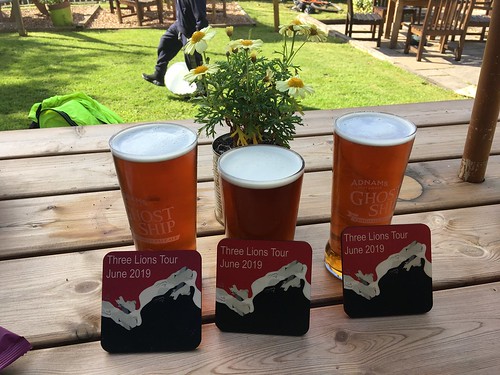 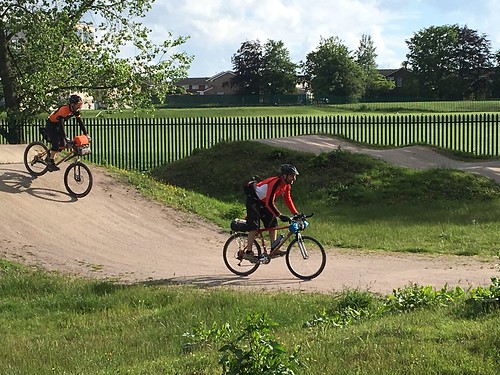 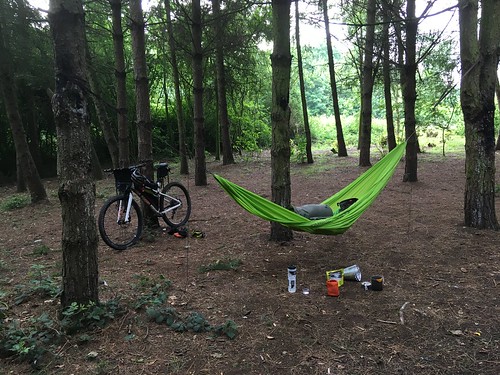 RRHHHHAAAARRRHHH!!! Yes, the "3 Lions Tour" was a cracker. Sadly losing much-missed BDS and Pickers for various family reasons, and ditto MuddyPete ages ago (although a shout here for originating the scheme), and no last-minute new takers (c'mon guys we're not that bonkers. Ah no, we are aren't we), we were down to three lions doing 3 Lions but huge fun was still had. Due to a "person on the track" my train to Tring was delayed, then after Tim presented us with our very excellent 3LT beer mats (a superb touch courtesy of Mrs 'Dog) we were off.

"plan quickly fell apart" - now, strangely, I don't remember it in exactly that form. I seem to recall that it went something like "Reg: 'so just here we could grind up that monster hill, go along a bit, then back down again, to get to this road we're on now but a bit further up, for no good reason whatsoever'. Tim: 'no thank you'. Reg: 'oh'. Only gone half a mile and we're being soft!

. We declined a visit to Champneys for a spa and manicure, and headed along the Grand Union Canal past Tring Reservoirs to Marsworth and confusingly a - closed - White [L]i[o]n. Here's Tim n Sam trying to gain entrance but methinks they'll be waiting a long time for their drinks.

Luckily the open Marsworth Red Lion was round the corner along with the aforementioned Pirates Outing. Some amazing machines on view including one for Stuart here:

Bar person slightly baffled by my lion mask (but he'd just served 20 pirates for goodness sake!), a quick beer and off down the canal to Ivinghoe, where we ended up a bit lost behind some houses. However on the upside I found a ford! It sported a perfectly serviceable mini-bridge, of which Tim availed himself, but I crunched down into the water to tick off the one foot wide stream. It was such a good ford, I decided not to exit immediately but swerved off down the stream to emerge 100 yards later to much hilarity from the assembled throng, thereby turning it into the "widest" ford I've ever done.

Again the longer route was declined, and I then remembered that the shorter alternative involved another ford - result! Two for the day. It also gave us the opportunity to photo the second (chalk) White Lion near the zoo. Just ahead was a T-junction, which mysteriously, despite me having lived here 30-odd years had turned into a crossroads today. Very spooky indeed. Naturally we followed it, popping out back at almost exactly the same place - by which time the crossroads had turned back into a T-junction again - woah, how many beers have we had?

Some bunch of kids mucking about at the BMX track:

Up the hill past the quarry and the burned out cars and motorbikes (some proper scenery at last), then round to the actual pub White Lion with its own scenic view of the A5 and Gulf petrol station. A quick pint then onwards to Leighton Buzzard via Bob Monkhouse's house (although he was out, having passed away a while ago), and a few cheeky woodland tracks and yet more towpath. As Tim mentioned we swallowed our principals along with our beer by nipping into Wetherspoons then finally the Black Lion. Mission accomplished! My neighbour coming out of the pub - perfectly understandable as she spotted us going in:

The only memorable moment of my night (apart from TBD's snoring like a lion) was waking up to find a giant slug just about to cross from my sleeping bag hood onto my forehead, mmm nice!

What a brilliant day - Tim said it himself, "I do love our boners"

I did manage a whole 3 miles on the bike, which to be fair is further the the silverstone debacle

Trundled into town just in time to meet a huge thunderstorm, soaking I was, seems like you missed it

hopefully I can make the next one.
I might organise something August bank holiday, I’m 50 on the 30th so a pass is guaranteed

(*) I prefer to call it a "life-affirming experience"

https://youtu.be/UW3agCYzHBw not one for typing...here's my review. Watch at your own tedium.
Top

"August bank holiday" - 24-26th? Hmm, on hols wi' t'family but could possibly do [bit of?] following weekend, just squeezing into August. Got a couple of pricey BaMs poss July/Sept, so was actually thinking of local-ish already, so would be nice to meet up somewhere (eg. is there owt round Rugby-ish?). If not, nae bother tis obviously your shout, crack on.
"My God, I'm two-thirds of the way to the grave and what have I done?" - RIP

Properly gutted to have missed this. Looks like you had a bloody good do there chaps.
Some of my pics https://www.flickr.com/photos/107347896@N06/sets/
Top

I've been a little over busy so have only just seen that this was happening.

Looks like you had a great time, I'll be paying more attention from now on so will hopefully catch up at some point.
Top

NIGE! Gawd it'd've been ace to have you along mate! Was wondering how you were doing. Maybe we could arrange some madness for August? That Hyde Park bivvy has gotta be within reach surely.
"My God, I'm two-thirds of the way to the grave and what have I done?" - RIP

As the 3LT was spawned during a previous BaM, it would be fitting if 3LT spawned a subsequent themed BaM.

Any suggestions?
May you always have tail wind.
Top

"Any suggestions?" - loads, but not sure mine are appropriate for a nice family publication such as this

Should be back out and about by mid August... time to put some fresh scabs on my Harris!
Top

Just a Reg flight-of-fancy mate, just ignore my ridiculous ideas. But you heard it here first if it happens