the rides are starting to become quite long in the 40mile minimum range if I start from home. I’ve a few routes plotted to get up to 11 fairly easily. It’s quite addictive this square hunting,
We're all individuals...except me

Went our the other day to complete the Peaks200: second attempt at my first ITT. Didn't actually manage that cos I'm probably way too soft (writeup imminent) but managed to get 2 other achievements as well as a 3rd possibly.

. So glad I persevered and attempted what I did. Thinking I could find a cycle route through from Chinley Head back to Edale or Dunford Bridge without backtracking... I obviously couldn't but the extended walk was character building as well as trying to get my bike up and down some of the extreme ups and downs (thanksfully most of this was in the daylight/dawnlight). 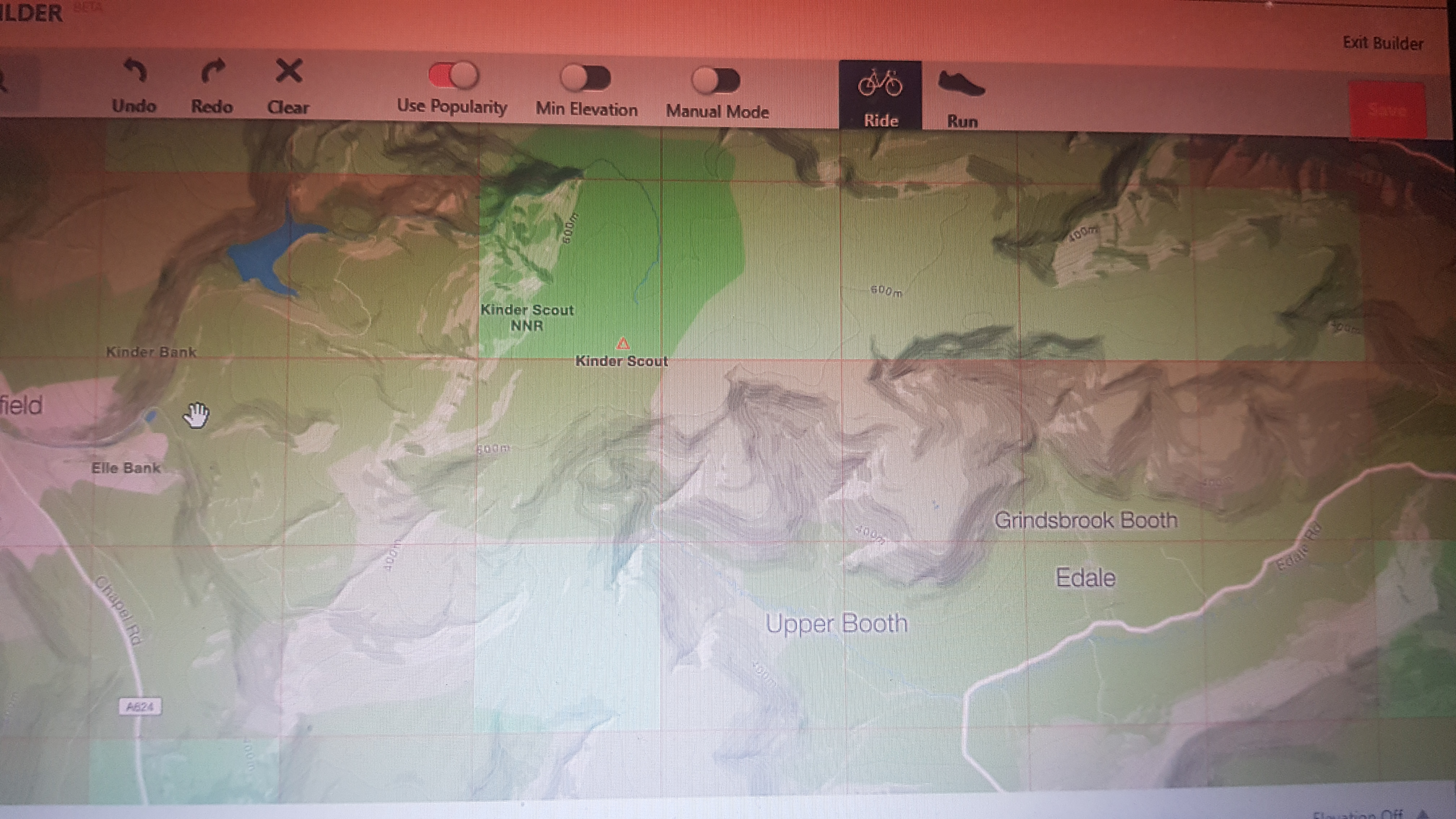 My lovely new tiles seen in the centre there!

Second I managed a bivy at 1950ft just down from Kinder Scout which I'm sure I'd have seen had it been daylight (bivvy at height not intentional but I made the exectutive decision to descend after a sleep towards morning time).

Bedroom for the night with the black dashed line (I'll never forget what black stands for now I suppose) to the left being my route I'd followed to get here!

* A by-product of which was that it confirmed for me that I was far from ready for the BB200 just yet as I doubt I'd get through it in the 36H alloted time. hopefully Stu doesn't think I'm too soft but I will be back for next year pending training and fitness

Well done Shaf, it's tough up there.
Top

Thanks v much Andy. Certainly did feel an accomplishment when I was trying to lower the bike down the (what seemed to me like) the mountain edges to get back down to safety... Really felt like one of then characters from the pics in the RoughStuffFellowship book. Pity I didn't have a belt and a mate to help ease the bike down/up....

i'm finding it good for encouraging me to explore, too, but may have to start driving out to the limits of my current 2
"largest square" before starting my rides, as id be doing 50+ mile rides, just to get a couple of tiles.

I'm originally from Coventry, so suggest that you go and fill in those gaps between Coventry/Kenilworh/Leamington, as they're fairly rural, and have reasonably quiet country roads and bridleways that you can use.
Top

I’ve finally made some progress

I’ve got the Brompton in my van so have stopped on the way home if I finished early and bagged a few squares. Today saw a daring mission where I may have accidentally trespassed on some MOD land, Kineton base is the largest ammunition dump in Europe apparently so i was very careful not to upset anyone, I imagine they could get a little twitchy.

13x13 might not be that impressive but it’s taken some doing, it’s quite easy to miss a square, filling in the missing squares to get to 13 has taken 85miles, I’ve also a section with about 7 random missing tiles I estimate thayit will take a 40mile ride to bag them even if i drive out to the start.
We're all individuals...except me

A mixed on/off-road ride of 51 miles bagged me some tricky squares and got me up to 14x14, I had to HAB across a field to reach a square mostly inside Jaguar’s test track. After doing a 15 mile ride on the bromnie and missing a tile by 5 feet I made sure I’d gone far enough.

I wish there was a live veloviewer explorer map which could show you location against the tiles, I keep having to switch between the two. Having lots of fun and discovering some nice lanes and tracks. It’s also a great motivation tool, I’ve ridden over a hundred miles this week mainly bagging tiles

Steve, if you use Strava then there's a VV plug-in that overlays Strava's map on their route creator so you can create a route that definitely (maybe) visits the requisite squares. Save the route then export as GPX or TCX, load on your device and follow it.

I’ve used it on the PC but it’s not the best, I’ve been using the bromnie and if I finish work early then just stop on the way home and get a couple of hours in

an additional bonus is that Mrs D doesn’t know how much time I’ve been spending on the bike.
I like just ambling along making up a route as I go which just happens to take in some squares. My little trip to hook norton brewery was a classic example, I knew I needed to get to the back of the car park to hit the tile. However I went to the furthest point on the wrong side so missed it by perhaps 5 feet.
Still I get another brewery trip

I've done this on maps.me on my iPhone

Cheers Ben, I’m not entirely sure what you mean. My current tactic is to have the veloviewer explorer map open on one tab and Live location OS mapping to navigate, it kinda works but if I could get real time location on the veloviewer map it would make things much easier

If you've got an Android phone then the App "Explorer helper for VeloViewer" does exactly what you're looking for Steve. It's essential for making sure you're not missing tiles imo..
Top

In Reverse wrote: ↑
Sat Sep 14, 2019 8:18 pm
If you've got an Android phone then the App "Explorer helper for VeloViewer" does exactly what you're looking for Steve. It's essential for making sure you're not missing tiles imo..

Andy's right this is brilliant. Takes a minute to figure out loading the veloviewer file to update the app but once done it's great for live checking your location on the grid.

BigdummySteve wrote: ↑
Sat Sep 14, 2019 7:34 pm
Cheers Ben, I’m not entirely sure what you mean. My current tactic is to have the veloviewer explorer map open on one tab and Live location OS mapping to navigate, it kinda works but if I could get real time location on the veloviewer map it would make things much easier

If you're on android then the above works best. I couldn't get anything like that in iOS so map.me with a file loaded worked best. But my file is out of date now so I need to work out how to redo it
Top

I havent focused too much on this, so far this year, but heres a view of all of the tiles which have been visited

(sure its missing some around Grassington/Nidderdale)

Was going to say that's not right, but...


I've visited a square that isn't coloured. Why is it missing?
Your data probably isn't public on Veloviewer. On the Veloviewer 'update' page, you need to tick the 'Share my data with anyone' box for it to be included on this page

This answers why I could only see Nigel's data out of the BB group. Now rectified.

My aim to get 20x20 by the end of the year is looking some way off.
We're all individuals...except me

Not really been looking to expand my square this year (It hasnt increased), but have been exploring a bit.
Lots of new places visited and hopefully of benefit in the long term.

Some interesting route choices at the weekend, allowed me to expand my cluster to 1000 tiles 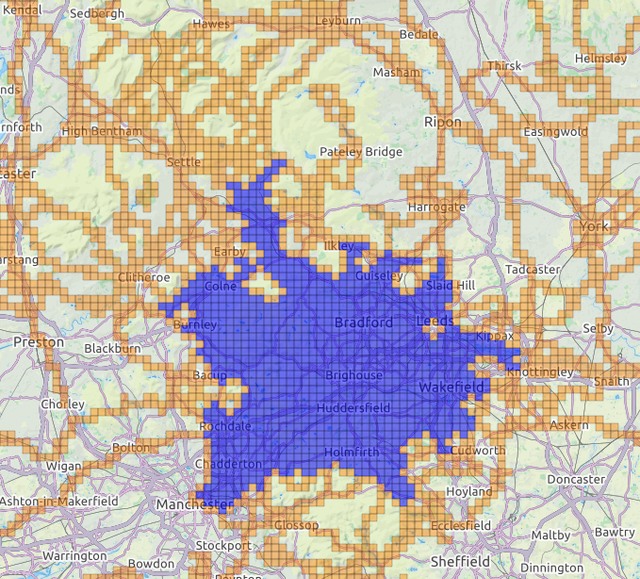 That really is quite impressive Chew, all due respect to you. Only problem - it's not shaped like any obvious comedy character/thing. Or is it?

Those squares south of Bacup/east of Whitworth aren't that bad to get - there's a pretty solid network of trails over the tops.
Top

In Reverse wrote: ↑
Tue Nov 12, 2019 9:50 am
Those squares south of Bacup/east of Whitworth aren't that bad to get - there's a pretty solid network of trails over the tops.

Cheers
From what I've seen, theres some good tracks up to the windturbines for when I have the motivation to do something specific.

What's in that one spot below the second E of Leeds that you don't have?
Top

Blimey, I was coming to post in here about getting to 10*10, as I realised that I was near a missing square yesterday so went for an explore.... But that feels rather insignificant compared to the map above! Well done Chew

Decent climb up there from Walsden gets you up onto trails to Hades Hill etc, and "Limers Gate" back out north to the main road into Tod is rideable iirc.
Top
Post Reply
332 posts