I know a few people on here know a thing or two about hammocks. I’m a total noob but very interested in what gear people are using for bikepacking and why.

Show me (and tell me about) your set-ups!

If your hammock curious, I'd recommend buying a copy of this: https://www.bookdepository.com/The-Ulti ... gJ2IfD_BwE
What value a life half lived if the half you lived was the wrong half?
Top

Not been bikepacking anywhere with it yet. In fact it hasn't been out of the garden!

Got an Exped hammock but it's a bit short for me so had a look around and decided to make my own. Well my wife did the sewing, I did the suspension. Got 5 metres of material from extremtextil.de. Only used 3.5m to make up a 3.3m (11ft) hammock. Got some tree straps from hengehammocks and some amsteel and made up various bits of suspension, a mixture of continuous loops, evo loops and whoopie slings. See this thread - viewtopic.php?f=13&t=17473 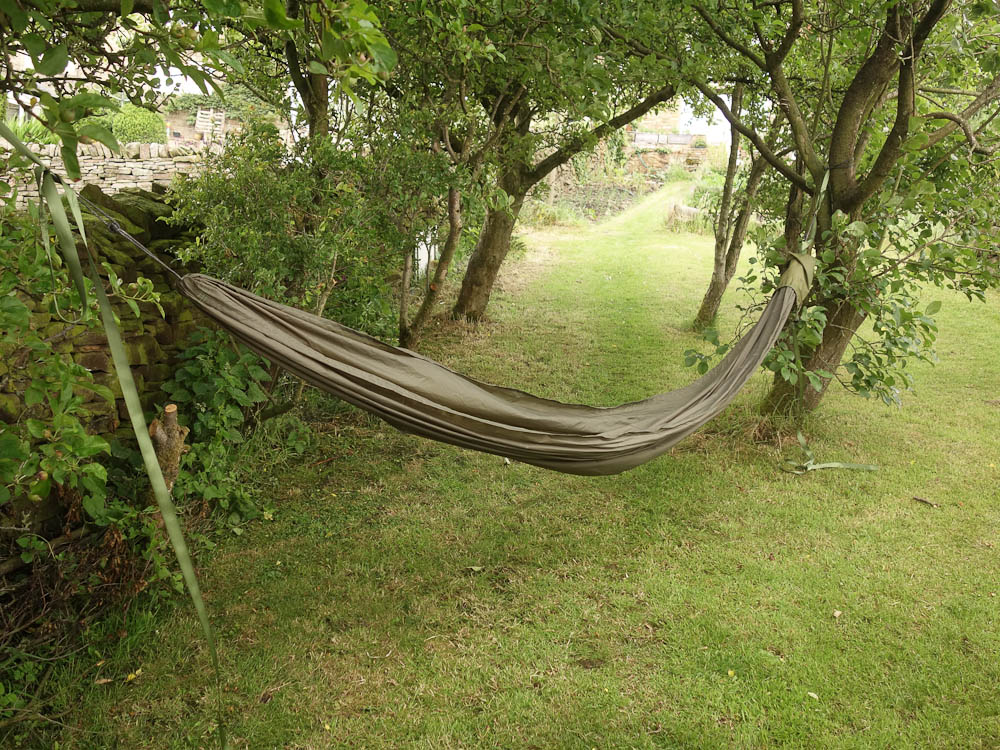 The hammock weighs 400g and the suspension 70g. I found a stuff sack from something which is big enough for everything. I think it could all fit into a Stem Cell so it's not a big item.

Not yet had to deal with the midges so at some point we'll make up a midge net. Also need to sort out an underquilt methinks. An Alpkit Rig7 was big enough to cover the Exped hammock but I need to practice a bit with it for this one. You need about a foot extra at each end.

Pipped to the post with the recommendation for The Ultimate Hang. It's available for Kindle as well if you use that.
Better weight than wisdom, a traveller cannot carry
Top

You typically need a tarp, hammock, top quilt and under quilt. There are various ways of frigging this and all sorts of semi-expensive gear as and when the urge takes.

If you just wanted to try it a cheap gathered end hammock will start you off. Any old tarp will do as cover, though a ridge line (5 to 8m will be plenty) makes life easy/ier.

An unzipped sleeping bag and a semi inflated matt (or CCF pad) under you will do.

If you survive the night and it vaguely appeals then start shopping ;-)

The ultimate hang is worth every penny and will tell you more than you will ever need to know. It's also a brilliantly easy read

Thanks all. Ultimate Hang ordered.
Top

Is that Volume 2 Charles? 'Tis much bigger with more info than volume 1 (not that the first is bad in any way).
What value a life half lived if the half you lived was the wrong half?
Top

Hammocking is always my preferred option for bivvying -comfy, dry, roomy. Did I say comfy?

The big dilemma for me is always, “Will I find some trees?” Easy if I’ve been there before, not so if I haven’t. So which way to go? Result is I end up taking both. That’s an extra 700g of stuff. I could leave the underquilt out (and save 400g), but that means a battle to stay on the mat all night.

I picked this because it’s not too spendy and is a lot lighter and smaller to pack than the DD Camping Hammock I have. This way I’ll have something suitable for bikepacking and a spare to tempt others to join me for the odd overnighter.

I’ve also started looking at Dutchware and wondering about a second mortgage.

What height are you? I'm 1.80m and found the Exped, that model, a bit too short for me for sleeping. I found I was laying on the folds of the gather and only had maybe 30cm room at each end.

I,'ll post a shot in the morning of the pack size of the Exped as well as the MYOG version.
Better weight than wisdom, a traveller cannot carry
Top

I’m 5ft 9 and prepared to compromise a little on comfort for the sake of weight and pack size.
Top

If you’re looking for something very light and packable DD offer their Superlight version. I’ve got one but it’s a bit too small for me at 6’2” so my kids use it. It’s sold with their whoppie slings and hardware. Weighs under 400g and packs down to the size of a tennis ball.

I've got one and find it fine. I like their suspension system too, 'tis simple and light.
What value a life half lived if the half you lived was the wrong half?
Top

Thanks all. The DD Superlight is only currently available in a very non-stealth orange, unfortunately.

The Exped suspension is their take on ladder straps, looks like it shouldn't work but it does and I'm happy to trust it.

As promised, here's a shot of the Exped Travel Hammock Plus (not the Travel Lite Plus) in its stuff sack along with a 750ml water bottle for comparison. The other bag is the homemade 3.3m/11ft hammock with its suspension. 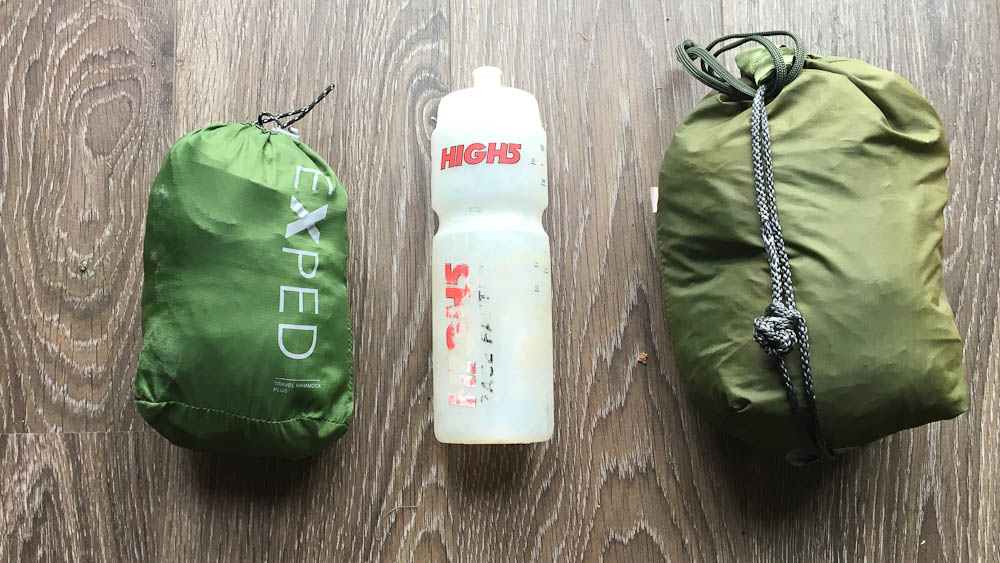 Edit: Without the suspension the homemade one will fit into a standard Alpkit Stem Cell so I'd say that the Exped would compress to that as well /edit.

Hammocks are a bit of a learning curve, for me at least, and figuring out what is best (for you) isn't easy. There's no simple formula of: You are X tall so need a hammock X+Y% long, X/n wide, with foot end higher than head end by so many cm. Seems to be a bit like bikes: some just work for you while others won't fit no matter what the geometry figures say. It gets to the point it's all personal preference! I could use the Exped for sleeping but I think I need to dial it in very precisely for it to work for me. The extra length of the homemade hammock gives me some leeway in that regard.

Really need to get some shots of me in both to give an idea of relative sizes, etc.
Better weight than wisdom, a traveller cannot carry
Top

Thanks Whitestone - that’s really helpful. I’m tempted by a MYOG project but I already have too much on. Think I’ll take a punt on the Exped
Top
Post Reply
16 posts • Page 1 of 1