Not much motorbike heritage in my family/friends but I've dabbled over the years.. so enjoy seeing folks machines even if I don't know their background.

Currently I have a recent husqvarna 125 and an old school honda africa twin.

Nowt here at the mo, my lads just got a ktm 125 Duke and that's fired
Me up again, I've had mainly trail bikes Xl's/ Dt's etc, used to be a Trf
Member.....most of my mates now ride Harley's/ cruisers etc which I
Don't mind looking at but they're not my thing. I've hankered after a
New trailie but there's nothing I can really say I fancy that's new except
A tenere or Africa twin but they're a bit big for what I'd need. Me and my
Lad watched the trials display and he wants to have a go so I might
Build a twin shocker road legal

Now you're talking, those Ural combinations look unstoppable.
Come in, she said "I`ll give you shelter from the Storm"
Bob Dylan.
Top

Yes agreed, I I’ve always driven a car like an undertaker but just couldn’t help it when it came on the pipe.
I was very lucky not to get badly hurt, my worst injury was from wheel spinning a bike on one wheel at 60mph, didn’t end well

We’re all individuals, except me.
Top

I had a ride in one of those, being imported the chair was in the middle of the road, it was the scariest thing I’ve ever experienced.
We’re all individuals, except me.
Top

I showed Mrs Ftk a Ural combo on eBay, 2wd etc, I said we could go
Laning together, the reply was a definite no with overtones of we'll
Look like George & Mildred

I had a ride in one of those, being imported the chair was in the middle of the road, it was the scariest thing I’ve ever experienced.

Specifically the dnepr urals.. They look vaguely exciting imo. Certainly make going to the shops more enjoyable.
I almost pulled the trigger a while ago on one, but having a vw t25 (syncro) in ongoing restoration I can't afford more projects based around rusty metal 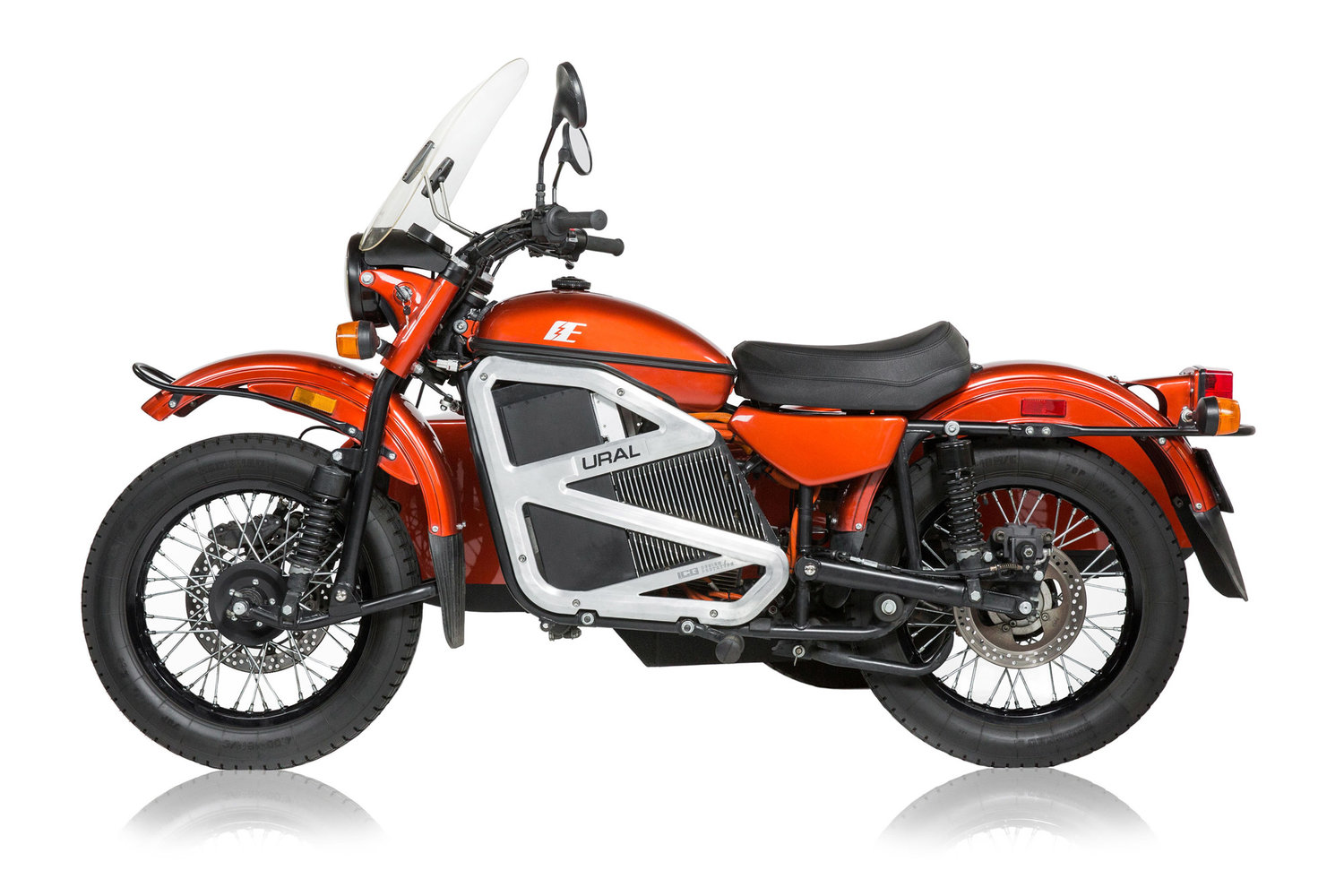 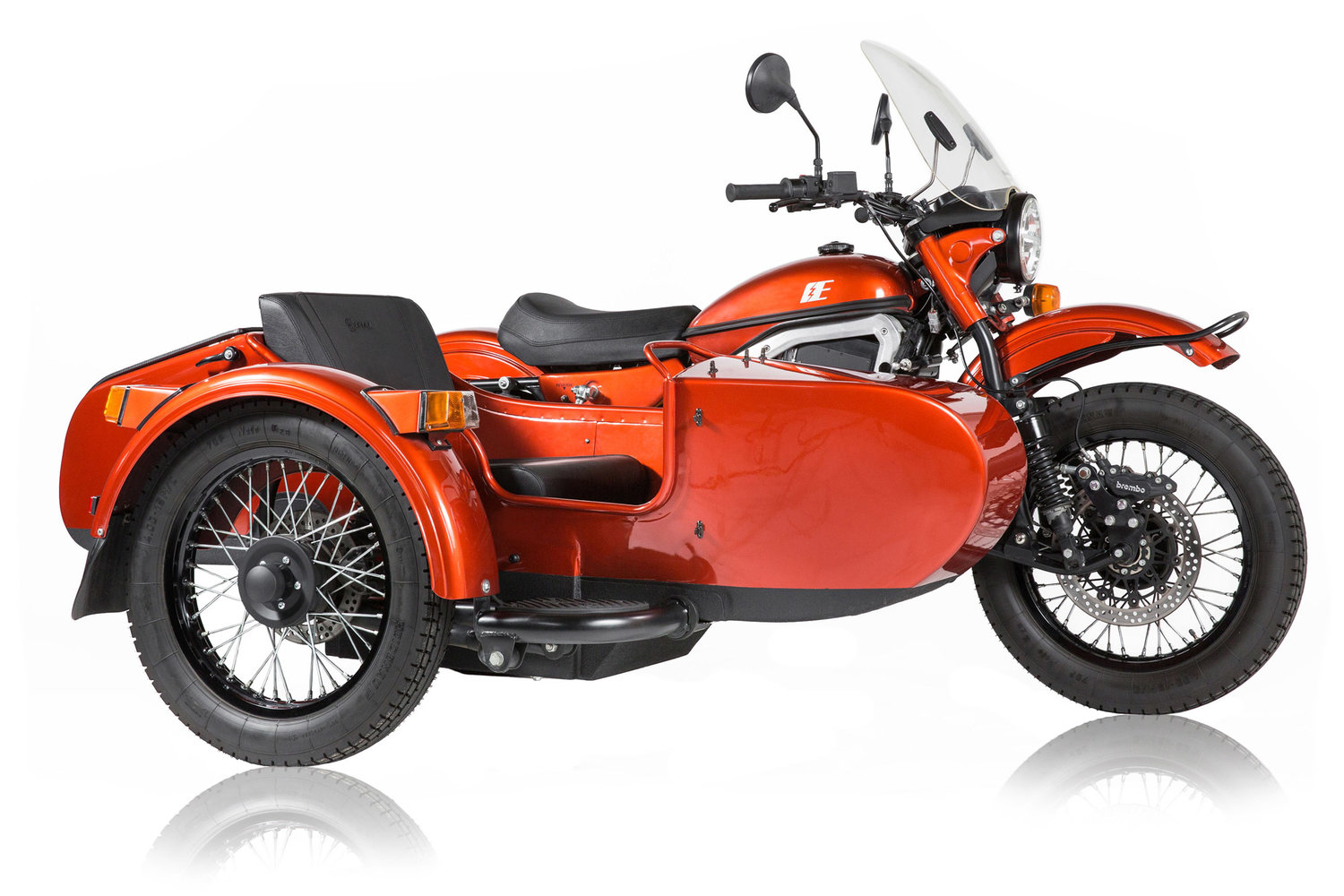 Bit late coming to this...busy digging n weeding for dad.
Probably said this before. Parents would not allow me to have a ped or 250

.
So did a sneaky, applied for bike n car test at same time,got car test through first. Passed,got a Austin 1100mk1. Parents happy!
Bike test came through, borrowed a yammy yb100? Passed,cycled to Bryant's of biggleswade to put a deposit down on a Laverda Jota 180. Idiot salesman saw pound signs but didn't advise me that it wouldn't be suitable,(am a shorty) he pushed it off centrestand and I nearly dropped it Domino style into all the other closely packed bikes . Very lucky to have saved it. So after trying a morini maestro, Guzzi Monza and a Laverda monjuic? (It was scary to ride,nothing below 6k!) (Remember,I had no experience)
Read a write up by Mick grant on the Ducati 500 MK1 pantah,had to have one!
Had it 12yrs,120,000miles, TT,and Europe every year,it never let me down. (Yes... really!)
Then got a cagiva elefant. Fell off it several times ,stationary,!(did I mention that I am a shorty?)
Then a 1994 900ss 1/2 faired.
A new Guzzi v11 sport. 2000
A Guzzi California stone 2002.
The 900ss has a mild amount of tuning work, modified,carbs, airbox n pipes. All rubber dampers removed,including dry clutch cover ones. Sounds like a bag of nails,but I know it was mine if it was stolen by its unique sound.
V11 is standard.
Both ss and v11 unfortunately only feel nice to ride above the national speed limit,it's a shame really. A lot of bikes are like that.
One thing about the Cali, you can put a lid on and ride, very liberating,just like cycling!
As I have said recently...still hanker after a Laverda Jota,it's the engine noise more than the actual ride,it's going to be crap compared to the 900ss or v11 (and they're crap compared to really modern motorcycle's!)
Happy days!!

Will find some picks to post later.
Last edited by Cyclepeasant on Mon Apr 13, 2020 7:20 am, edited 1 time in total.
Insanity over vanity
Top

Mate of mine, Donald, had a Laverda Mirage. Yep - 1,200 cc of pure muscle. It was ginormous. I remember going over the wee road from Amulree to Kenmore and there's a couple of zig-zags. He had to 3-point turn on one of them.

Another time, he'd been servicing/cleaning it just before a group of us were going on a ride. One of my other mates - another Colin - wanted to try it so they swapped bikes. About 5 minutes later, I'm riding along minding my own business when Colin comes screaming past on the Laverda. Really, really going for it. There was smoke coming off the engine. He disappeared off into the distance and I was thinking "bloody hell, Donald won't be impressed". We got round a couple of corners and then saw the Laverda parked in a driveway. Colin was standing beside it, helmet off, shaking and white. Turned out that he'd grabbed a handful of throttle, then the throttle cables had jammed full open as they'd been snagged when the tank was refitted. Luckily, he had enough of a straight to kill the engine and grab the clutch before he hit a sharp bend at around 120mph.

Interesting SR,
We all thought Laverda triples were massive bikes then.
Look a today's bikes , they're truly massive, saw a Jota amongst a sea of bikes at the Margate Meltdown last year...it looked like a 600!
Had a go of a mates triumph Tiger,that is a monster compared to my old elefant, smooth to ride like a lot of modern bikes,one + side effect of good fuel injection systems.....
Still ,not as good as snarling, spitting, induction roaring carbs though!
Viva air cooled engine's!

With carbs .... and no ABS, traction control or anti wheelie nonsense

With carbs .... and no ABS, traction control or anti wheelie nonsense

The Laverda Montjuic was my first dream bike I remember reading a review that said you accelerate and nothing much happens then you are suddenly a 1/4 of a mile down the road sounded quite exciting compared to my Honda CB200 it was also supposed to be the loudest road legal bike at the time which also added to the attraction, a noise came up Tewkesbury high street one time and that was probably true only one I ever saw . Last one I saw for sale a few months ago was priced at 15k .

Stu did you get to do much test riding of your creations specials are just kind of special aren't they.
Top

I've a 98 honda transalp 600 that i rebuilt last year. A suzuki sv650s that i was considering selling just due to lack of room and a beta alp 200 which im hoping to use for things like the TET, classic trials and long distance trials. So far i've only ridden it on a normal trial and found it extremely hard work (im an absolute novice though) so have been looking at modern trials bikes.
Top

A lad who lived in the same village as me had one, you could literally hear him heading home from two miles away - 'twas lovely.


Stu did you get to do much test riding of your creations specials are just kind of special aren't they.

Yes, riding / testing was very much part and parcel. I recall inquiring about health insurance once and the bloke telling me I was in the same same risk group as bomb disposal divers

Stu.
You turned down a job at sports motorcycles????
As a Ducati owner,Steve and Pat were god's after they beat honda at the F1 TT with Mike Hailwood

especially after Honda's sneaky deal at previous TT robbing George Fogarty on board a similar 900ss they built.

(Maybe I was easily impressed as a kid!)

I have found a Laverda we can afford!!

I can't see how the insurer's could see any comparison Stu

You turned down a job at sports motorcycles????

Yeah. However, I got to know Steve reasonably well over the years that followed as Sports was only about ten miles from my place and Mrs Wynn would drop off Ducati parts for me when she was out shopping.


I can't see how the insurer's could see any comparison Stu

I told them that. What could possibly go wrong I asked and the rep just stared at the nitrous 'busa sat in the corner

Ooh just found something else - sorry about the quality but it's a picture of a picture.

York dragstrip and early 90's probably. Ailsa getting interviewed for't telly and racing my Z1R and Curl behind donning his helmet and racing his Z1260 (or possibly 1428cc by that time) 'Suspect Device'. It was very quick but we always suspected it would explode one day hence we painted it like a parcel bomb and called it suspect device.

These days were generally a blur for me as I'd usually be looking after or at least feeling responsible for 3, 4 or more bikes. 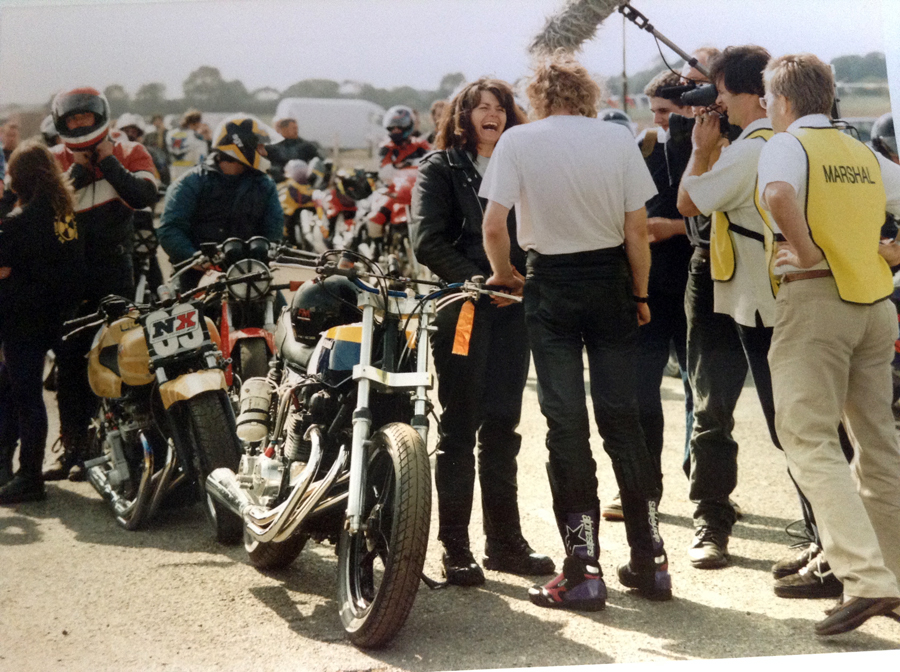 Come in, she said "I`ll give you shelter from the Storm"
Bob Dylan.
Top

tobasco wrote: ↑
Sun Apr 12, 2020 1:17 pm
I’ve always liked the idea of living in a large garage with a mezzanine bedroom above the toys.

Aaaaah!
I keep having this dream too!
Except a full workshop space too, just need a mill and a lathe to the collection of equipment I already have ......

You can never have too many tools!

that was me on the right its not a real motorbike 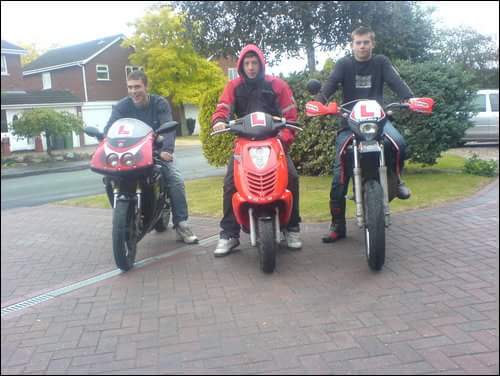 I’ll dig through my photo’s. used to visit Santa pod 77-80 - a mate used to run a Z1000 with twin choke Weber’s and nitrous, then a Z1300 with nitrous and turbo if I recall correct, rode there and back. Also did Kent custom show isle of Sheppey in 78 where two mates won things with custom T160s - we used ride down south from Tyneside and wild camp on a roundabout off A1 just north of London, it was known as The Campsite. Wouldn’t get away with it these days.

Like others in this thread I wanted a Jota, but couldn’t afford one. Choice for me in 78 was Z650 or a 75 Laverda 750 that had been stood in a shop not sold at knock down price. I hadn’t left parents nest in those days, and in winter I used to take the motor out of the Lav and carry it up four flights of stairs to the attic which was my domain. The frame and wheels followed. Bike spent winter up there getting fettled awaiting spring. I can barely get the thing on and off it’s centre stand these days!
Top
Post Reply
73 posts