My New Years Day pulled back is almost as good as new, but I'm not going to risk it with a long ride on either day, short and simple for me.

If so the Pack raft will/might be out to play with one of the Dams depending on what my riding buddies want to do, fi they go for a longer ride I'll go for a paddle at the first Grid Ref on the list. look out for me as you pass.

Cath and I will be there. Probably get there about 1930-2000 depending on traffic.
Better weight than wisdom, a traveller cannot carry
Top

Might do second Llawryglyn climb for the first time, then a brew at Mr H's if still open.

Have to say, I've not packed for a winter bivi for a while. bulky isnt it!
Top

Probably get there about 1930

Based on the decor last time I was there, you should feel right at home

All the chat about Nant yr Arian and the various lakes around Anglers Retreat has made me all nostalgic. Wonder if any of the route markings I spent hours nailing up for the Mach 1,2 and 3 routes are still there? It was done in 2001 so nearly 20 years ago

Should be there 9-9.30 depending if I stop for chish and fips on the way.
Powered by crumpets.
Top

Aye. Even bulkier since I've also packed something a bit, er, topical.....

Anyway, I've had to stop for 10 minutes just to soak up the silence. Just a baa or two and that's all. Photo means bugger all. You'd have to be here

Based on the decor last time I was there, you should feel right at home

You'd not recongnise it Duncan.


Wonder if any of the route markings I spent hours nailing up for the Mach 1,2 and 3 routes are still there? It was done in 2001 so nearly 20 years ago

Some but not all. I think proper XC loops are well out of favour amongst 'mountainbikers' these days. Shame.
#corporate shill for hire
Top

I work in traffic #boring

There's an ongoing project to update the signage and general visibility of the trails. Rightly so, good area for general mtb'ing.

Hope he brought his chocolate labrador for full effect, now what was the name of that dog?

Found some accommodation with a great big fire, to windy to bivi out
Top

kudos to anyone bivvying out tonight!
Top

Ah yes, the outfit. Weather was a total nightmare. So really it felt like Armstrong & Miller's WW2 'chav' pilots - "Blud, you can't like make me do this bivvy cos that's dissing me and this and that and anyway I is got a note from my mum and I'm not even lying. Isn't it though isn't it. Standard!"

Currently seriously off-piste from the Busters GRs - in Mach Maengwyn cafe!!! Hope all going well everyone!

Stu, we'll come up back road to Cemmaes Rd, bway to Commins C, bway to LBM. Should be there for 4. Don't think we've left owt in the school, guess you'll just have chuck it out into the car park if so.
"There comes a time in your life Ponsonby, when you think: 'My God, I'm two-thirds of the way to the grave and what have I done?" - RIP

PS can you stash a piece of DFLD cake under the counter please or is that against the Rules? I'll bet it is. Ah well, flapjack again then

pistonbroke wrote: ↑
Sat Jan 11, 2020 8:59 am
Hope he brought his chocolate labrador for full effect, now what was the name of that dog?

I had to remind our Reg that the name of Guy Gibson's dog is extremely non-PC these days.

Once again, thanks to Dee and Stu for all that they do. I even had to break into Dee's lemon drizzle cake as everyone else was going for the buttered Welsh Cakes

Not quite the windiest conditions I've ever ridden in, but not far off it. Definitely some memorable weather there!
Top

Well that was a bit of a weekend.

Plan I had was to turn right after Llan up the 'back side' of Foel Fadian and then head south towards Rhayader ticking off Stuart's grid references.

When I had issues pushing my bike up the road behind Fadian I thought I better have a rethink.

Decended towards Staylittle and met FLV climbing up. Had a chat with him and he turned round and joined me on the descent and climb into Hafren. He left me after a while as I stopped to change the batteries in my Garmin. Saw another group at the toilets in Hafren and then followed the NCN route into Rhayader.

Went in a pub that claimed to be serving food and wasn't. Decided to opt for a coffee and packet of crisps whilst I made my mind up what to do next. The coffee turned out to be a good move as all the locals were grumbling that the beer was off.

Decided because it was dark and chucking it down navigating to Lluest Cwmbach bothy was a faff to far.

Rode to the picnic site at the top of Penygarreg res with the idea of bivvying there instead. Riding to the spot was like being subjected to a jet washer for an hour and I was wetter than an otter's pocket.

Decided that trying to set up a tarp would be too much of a comedy moment so kipped in the toilets entrance. 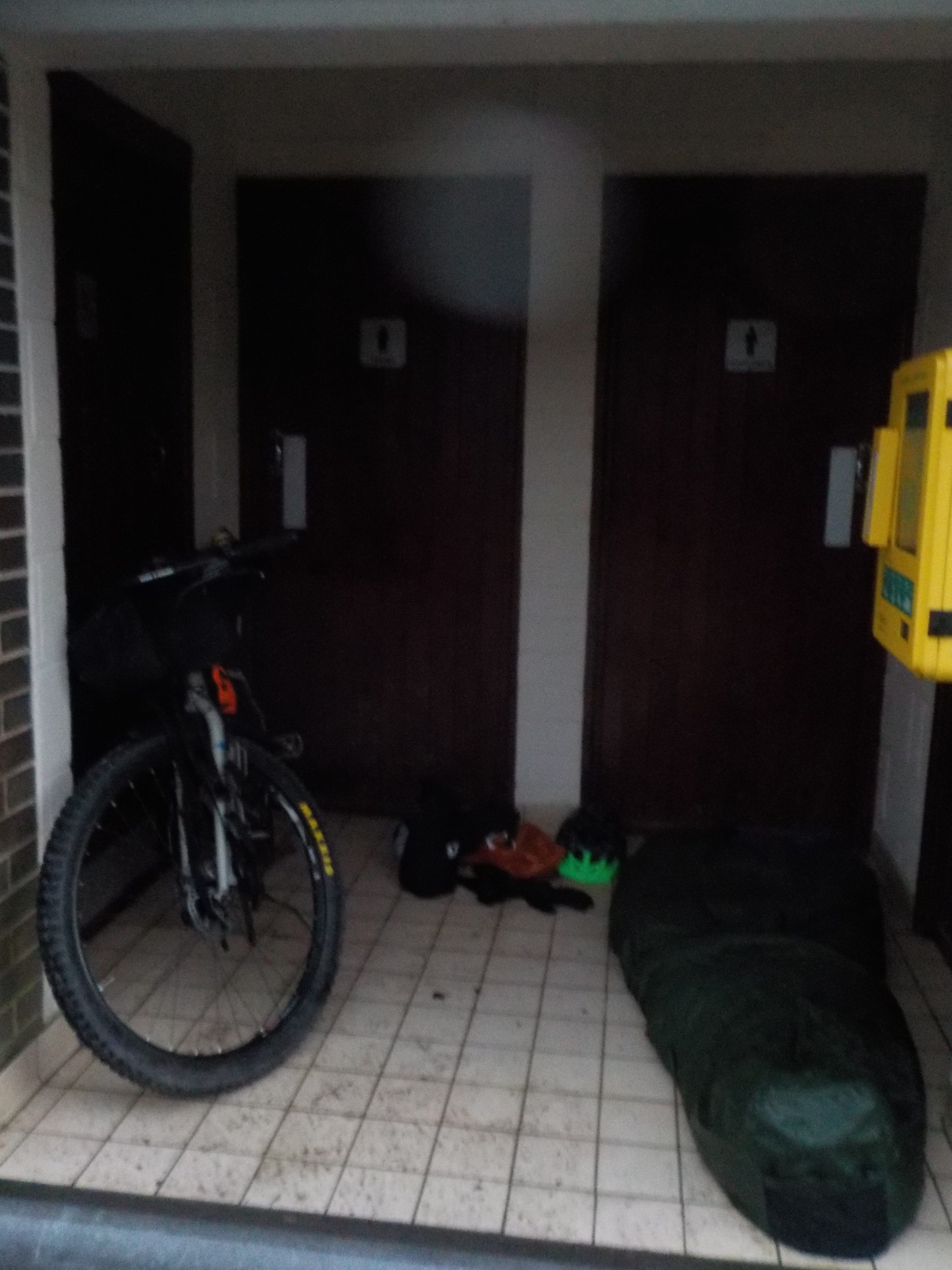 Headed back via the Roman Camp and back down towards Rhyader via the Golf Links and back up to Llangurig the way I'd came. Then I took the back route into Hafren via the Transcambrian and returned via Staylittle and the track down into Penant from Dylife.
Last edited by Gregsie on Sun Jan 12, 2020 10:52 pm, edited 1 time in total.
Powered by crumpets.
Top

had a great time managed to find at least one dam,the weather was awfull but having my bear with me kinda of helped with the weather.tried to find a bivi spot at lyn cwm-byr but was too windy,headed off to dylife were i came across a stone building with cans of guinnes,a big fire,a bed to sleep on lol.
thanks for the cups of tea and cake stu,dee

I'm not sure what it says of 'boners that I recognised that toilet block immediately before even reading the post.