I may be in the market for a light bike with a bit of bounce at the front. What’s good in carbon that would take a framebag and work for more technical bikepacking?

Johnclimber if you say lauf I’ll be round with a knitting needle to take to your packrafts.
Elite keyboard warrior, DNF'er, Swearer
Top

Pivot Les all the way for Divide-Riders Dave!

Can also convert to single speed with a change of drop-outs..
(Over)Reaching for the elitist 'vision'....
Top

LES would be high on my list - but the frame space isn't the largest.

Also isn’t there a Shand one, although looks like a generic Chinese carbon job
Top

My Stumpjumper does quite well. 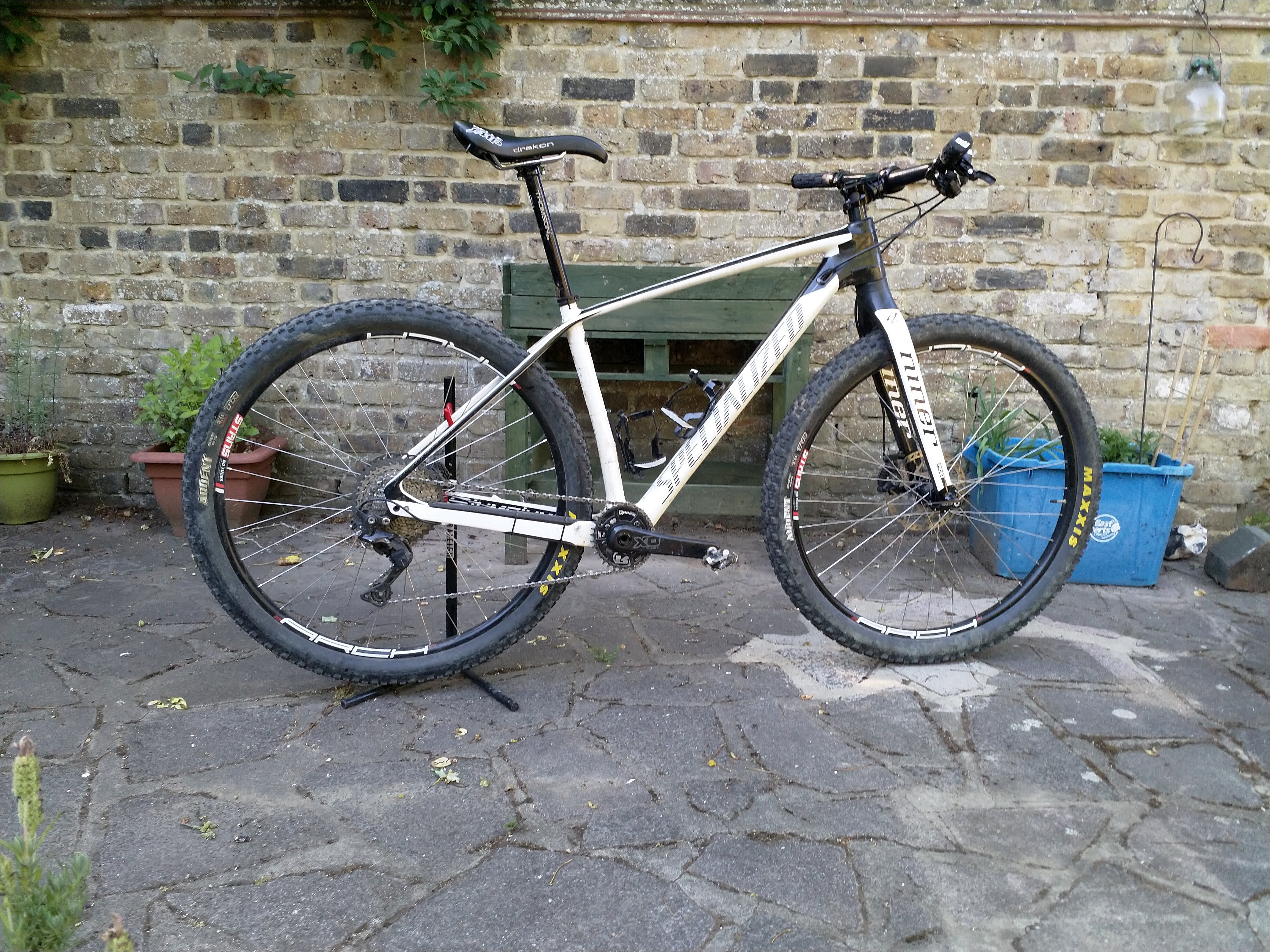 Sonder Transmitter Dave? 65 deg head angle so should handle the rowdies and will take 29 or B+. Decent triangle size too.

Nige/mbnut bought one fairly recently and seems to have been very impressed.
Top

Santa cruz do a couple. Highball or chameleon depending on how much bounce you want.
Top

Yeah, better to stick with Ti. Think of the weight you'll save by not needing to cover the frame with protective tape

Dave... I have the transmitter carbon (I'm 5ft11) which you'll be hard pushed to go much lower in (pure frame) weight...

The forks are a bit crappy (or just need a good service or a good tune up) but you're more than welcome to borrow it for a few weeks.

*afair its at the 1200g mark that frame which really is cutting edge and came with 5 years warranty and they (AK) said it's their strongest frame yet!!
Top

The Shand thing never really happened although there were a few prototypes kicking around (Rickie Cotter rode one on her TDR ride), Emily Chappell won the Strathpuffer a couple of years ago on one. I still ride one.
Wildcat
Top

I have a Sonder Transmitter Carbon too. I used it on the HT550 ITT and the Ard Moors Enduro this year with 130mm Revelation forks and 2.6" tyres and was very happy.
I have now got 130/160mm Pike forks on it (no fault of the bike - just because I personally needed to raise the front end because of my inflexibility/poor bike posture putting too much weight onto my hands).

I have a Cube Reaction carbon frame. Running 1x10 with some rigid 29 forks. It has some fairly ordinary wheels. Its 10.25kg. The carbon eastons take me to 9.25. It has a carbon seat post an bars. Im 80 kg. I used it for italy divide this year and it was ace. The frame was €250 from ze germans.
As it was built up from parts i had, it was a super cheap build. Highly recommend.
Ian
Top

Any hardtail frame is good for bikepacking (my Planet X Dirty Harry (probably a cheap Chinese frame) is light (circa 9kg with some trick bits and bouncy forks)) has done lots of bikepacking, ITT's and short races - fast, comfortable, light etc etc.

Frame triangle isn't massive, but a full frame bag does fit, or an Ocelot type framebag fits with a water bottle.

Not sure you can still buy this frame, but there's loads of generic Chinese frames on tinternet
Top

I would NOT recommend Scott anymore.
Doing the Borders 220 a couple of years ago the seat stay cracked !

I didn’t see it at the time but there was an annoying noise one day after breakfast, which disappeared after a mile.

And Scott did not honour the warranty, which I thought was 5 years. (They had changed it to 3 at a later point than when I bought it.... think, anyway I couldn’t convince them, though it was just 2 months over 3 years.

A mate who is very technical explained how there can be weak spots in the carbon, but all that should be thoroughly tested before release. A bit like weave and warp in fabrics.

So I’m into carbon, despite that.

I would recommend a Canyon Exceed, very light, guaranteed 6 years.
(James Hayden was in one in this year’s HT550)
Top

redefined_cycles wrote: ↑
Sat Nov 30, 2019 12:21 pm
Please don't swear at it though and you're welcome to try it out with a different set of forks if you wanna

Very kind offer Shaf, thank you but I could never make such a guarantee and I'm a tiddly 5'8"

Thanks to all the other ideas. I've got to swing a deal with a big customer next week to fund this so wish me luck. Definitely going carbon though as I am enjoying the ride on the Cutthroat. It may be utter bollox but modern carbon feels a bit more springy than Ti at the back. To me anyway
Elite keyboard warrior, DNF'er, Swearer
Top

I reckon it very much depends on the frame design and carbon layup. If I wanted to be sure of a comfy posterior I'd be looking at a Trek Procaliber.
http://www.blog.scotroutes.com/

If you like how your Cutthroat rides then keep it in the family and get a woodsmoke! Takes plus and 29er wheels for a bit of variety...

Still some frames available
https://www.starbike.com/en/salsa-woods ... _BwE#70154
We're all individuals...except me

Wait until you see the price of a cutthroat frame