Currently run a 26" Cotic Soul for fun, Salsa Fargo for journeys and bike packing but shes heavy. Was looking for something of an all rounder that would do a weekend trip, but equally be good for a casual spin out. I know the Fargo will do this but the weight irks me for a quick spin out.
Besides, you can never have too many bikes right !

Thoughts on the escapade ? Partner has a Croix de Fer which is nice but a little too big for me.

by Landslide
It'll probably not build up into the lightest bike for a 'casual spin out' (though if that really bothers you, you'd probably be looking at a light road bike instead), but the handling's good for on-road stuff.
Off road, I've found mine to be very capable, only limited by the tyre size (at which point you'll probably want an MTB instead). It coped admirably with the Badger Divide route, and sections of the Dales 200 route. While not the ideal tool for the job, I've also ridden it down the Plantation Descent at Stanage, and Devil's Elbow on Blacka Moor.
Without wishing to get into the "steel is real" wankery, I much prefer the ride feel to the Genesis CdA it replaced.

by whitestone
I demoed one earlier this year so have only the one ride (of about four hours) to base my impressions on. I've a Genesis Croix de Fer which is similar and aimed at the same niche. The bike I demoed had "road plus" tyres, WTB Horizons.

The Escapade is much lighter than the CdF, probably a couple of kg lighter maybe three, so it felt quite a bit different. It's very stable, I'd no problems taking my hands off the bars even when pedalling uphill, don't know if that's the tyres or the frame as I've not ridden it with 700c wheels/tyres. The bars were incredibly stiff, it was as if they'd specced an RSJ rather than something with a bit of give. I'd definitely give them a wide berth and would fit something more suitable like Cowchippers or Woodchippers.

Probably wouldn't cut it for going out with the chain gang but as a winter/general hack/mild off-road bike it's pretty capable.

by GregMay
Having put close to 5,000km on my Escapade I'll give my brief thoughts:

Excellent value for money - mine has not had an easy life, used as a daily commuter, raced the Dirty Reiver, used a lot for pre TDR training. Still works, gets me places, also gets me into trouble the odd time with the things I've ridden it down locally.

It is comfortable - not as much as my Cutty, but it is very nice to ride on crap ground. I gravel, towpath commute 16km each way every day with < 500m of asphalt.

It's going to be as light as you can afford - but there is a bottom line to how light you can get it. But it's not for that sort of riding.

It's a Cotic - Cy is a great guy, he makes bikes that he wants to ride, and he actually listens to what we say as cyclists. The CDF... it's an OK bike made by a large company.

It is one of the few bikes I own that bring a smile to my face when I stand back and look at it. This and my Salsa El Mar are the two bikes I would keep if I had to get rid of the others. This is a rather large statement from a jaded ex-industry type. 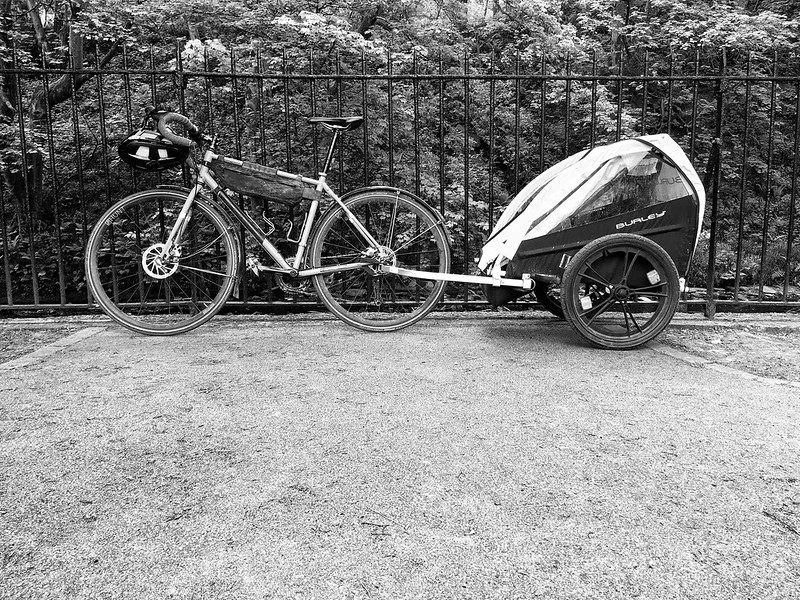 Yeah, this would be it. Though both bikes are Taiwan imports (and you're not comparing anyway), in the general scheme of things these days the small-brand thing would swing it for me.

Nowt wrong with the cdf but it's a much heavier tank of a thing and much less fun to ride.

I too am a fan of Cy and Cotic bikes (as well as my Escapade I'm currently on my second Solaris and only reluctantly got rid of my 26" Soul this summer).

by Landslide
8310km on mine. I've recently built up some 650b X 47c wheels for it, having previously used 700x42c. I think the 650s make the steering a little twitchier. Extra cushioning and grip comes in handy when the terrain is a bit rockier or looser though.

by dnrc
I had one for a few years

Did road rides on it, Did BIkepacking on it, Even rode it round the Nurburgring

It rode great, was comfortable everywhere and good fun


Only reason I moved it on was I replaced it with a Titanium CDF because titanium...

by Daveysnaps
Thanks for all the feedback folks.

Popped down to Calver today and tried a small Escapde. Agree with the bar comments. The ones fitted were'nt for me at all. Also running on Sora grouspet and brakes. Apart from that though, it felt good. Slightly stretched I think but would need to put some different bars on and tune it. Overall though was happy with it. Comfy and rolled well and fine on wet gravel despite it being on more road tyres.

Called at Alpkit after that though to pickup a merino top.. Happened to ask if they had a Camino in my size (medium on their sizing) and they did ! The nice chappy threw on some pedals and sent me for a spin up the lane at the back of the shop. Now it was only a hundred or so yards but if I had to choose.. The camino felt better. Hardly apples for apples though as it was brand new and not turned a wheel. It was also running the newer GRX groupset. I'm hugely impressed with the shifters and leavers.
Forks also have luggage attachments with is a plus for me. Frame and forks half the price of the cotic (for the Alu version).

Nowt wrong with the cdf but it's a much heavier tank of a thing and much less fun to ride.

The geometry isn't much different at all, and I'd be suprised if there was much more than 250g in the frame weight difference (does come from a really good factory in TW though). But build kits + wheels can make a big difference. I rode a Sequoia a while back and it was the most dead-feeling bike of it's type I'd ridden on first impressions, but the chap swapped the wheels and tyres and it felt much better for it. Still, current Escapade looks pretty spot on to me.

by GregMay
Mine was a frame up build - first thing I spec'd was good wheels. As Jameso said, makes a massive difference.

by Gregsie
+1 to what's already been said.

Got the older steel forked version. Built it from frame up as a gravel bike with flared bars. Really impressed with how capable it is. Used it for gravel riding, chasing MTB'ers down easier trails and at Lady Cannings and have also bikepacked with it.

Found it very comfortable for all day riding, but I think that's more down to the set up than the frame.

If I had to whittle down my bikes to one the Escapade would be on the short list.

by Daveysnaps
I was originally going to go for frame, forks and wheels from Cotic and take the Hope 20Five wheelset option. Good choice on the wheels or do folk have better options at similar cost?

by GregMay
I've a set of Hunt x Mason wheels on - early version, but they have literally not thrown a spoke or a wobble and I have battered the s**t out of them.

by Zippy
Thanks all for the comments on this thread - it follows on well from my snappy kinesis thread!

I'm gonna start saving for an Escapade I reckon then!

Daveysnaps wrote: ↑
Sun Nov 03, 2019 6:12 pm
I was originally going to go for frame, forks and wheels from Cotic and take the Hope 20Five wheelset option. Good choice on the wheels or do folk have better options at similar cost?

I'd probably be looking at the Hunt range, Cotic can supply them too.
All times are UTC+01:00
Page 1 of 1
Powered by phpBB® Forum Software © phpBB Limited
https://www.phpbb.com/