What you done t' your bike today

Very impressive defences, but doesn't that equally apply to you now Ray though?

"I can't be arsed to unlock/untangle all that lot, I think I'll just walk to the boozer or it'll be closed by the time I get there".

I had a Puffin frame briefly earlier this year that I bought for some of the parts. The EBB insert was very stuck. I loosened it by removing the screws completely, soaked it in plusgas down the seat tube and down tube and then in each side over a few days. Poored a lot of boiling water on it followed by cold water to expand the alu EBB and break the corrosion to the shell then put it on its side cradled in wooden blocks and gave the alu insert a couple of hearty wacks using a hammer and block of wood. Out it popped.

Edit: Fair play on a singlespeed wjith those hills behind you!

It's going to ride like a bag of spanners tomorrow, isn't it? All that noise-dampening dirt gone, to be replaced by rattles and squeaks...
Top

Took nearly 20 mins clipping the baffle for the Hydrapak bladder bwfore realising it just needed a little edible lube (I used olive oil) and it went straight on.

Before that added the garmin out front mount for the Wahoo as the Wahoo mount is on the roadie. 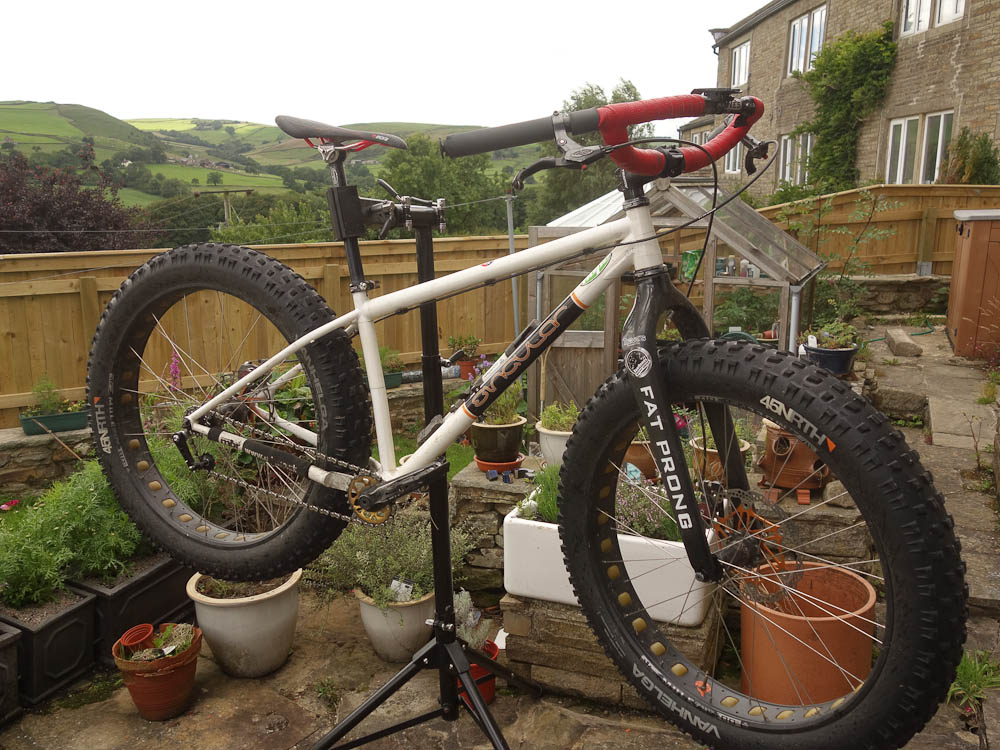 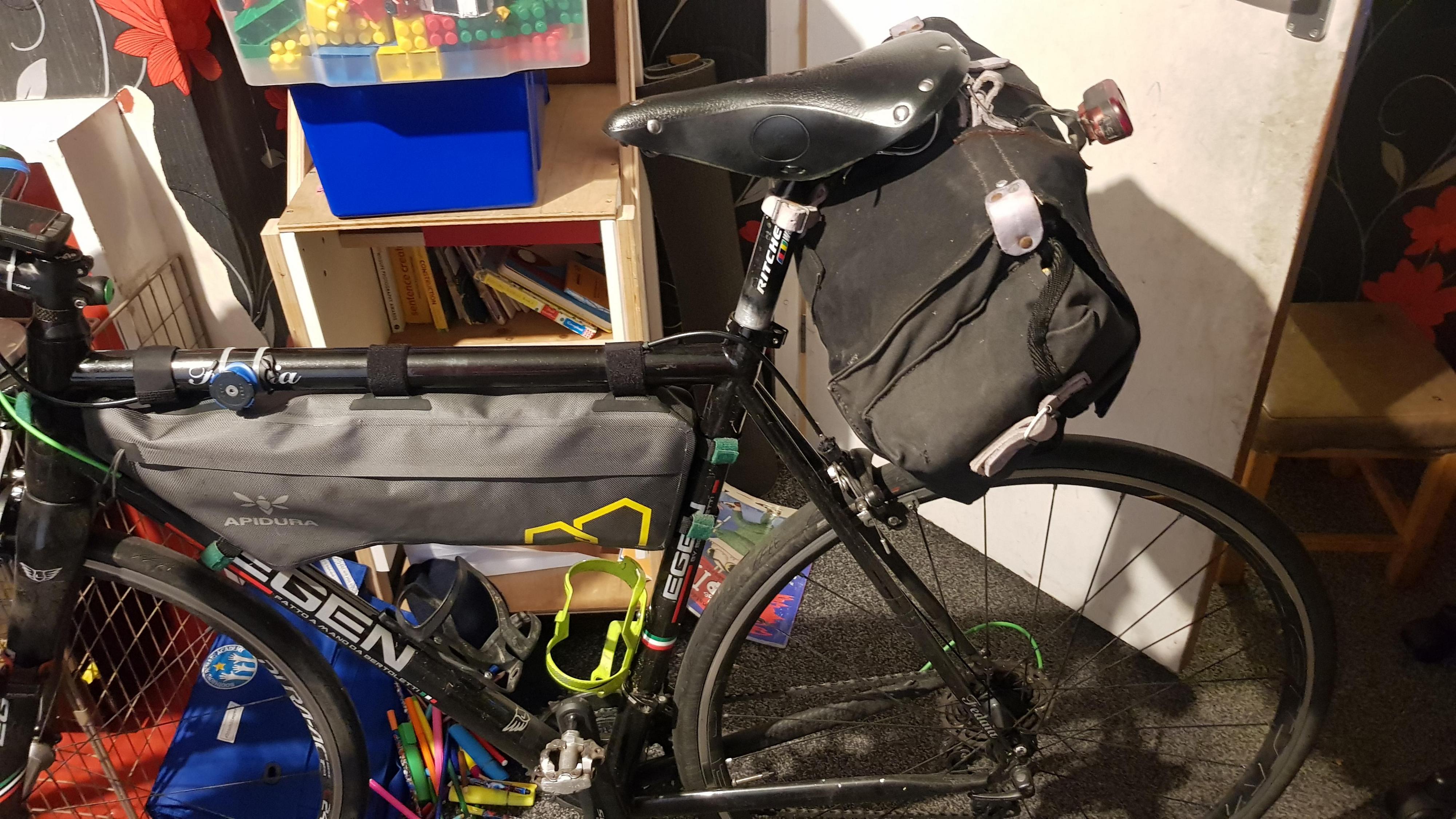 Popped the carradice on the commuter (for you can guess what)... Then managed to squeeze the air powered respirator in there somehow. Hope I dont suffer too much water ingress as that could become an expensive do 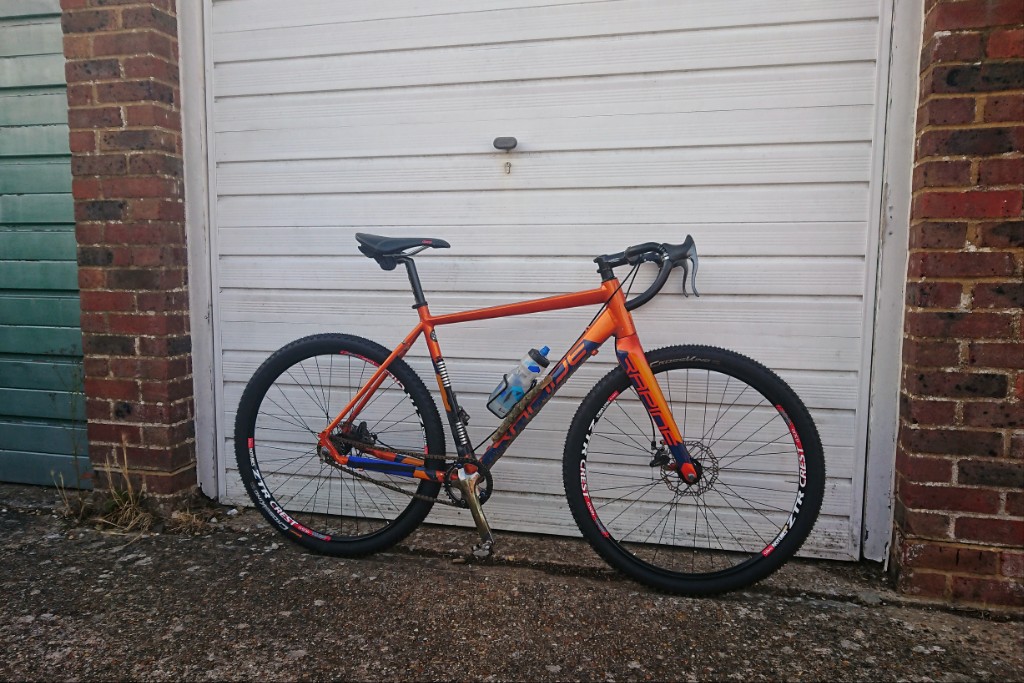 hate putting new bar tape on. Always feel like I should buy two rolls, with the first being a cheap one, so it doesn't matter when I inevitably

on the bombtrack
new pads, and longer brake hoses to manage the jeffs and also be able to take the sweetroll with out being in the way. 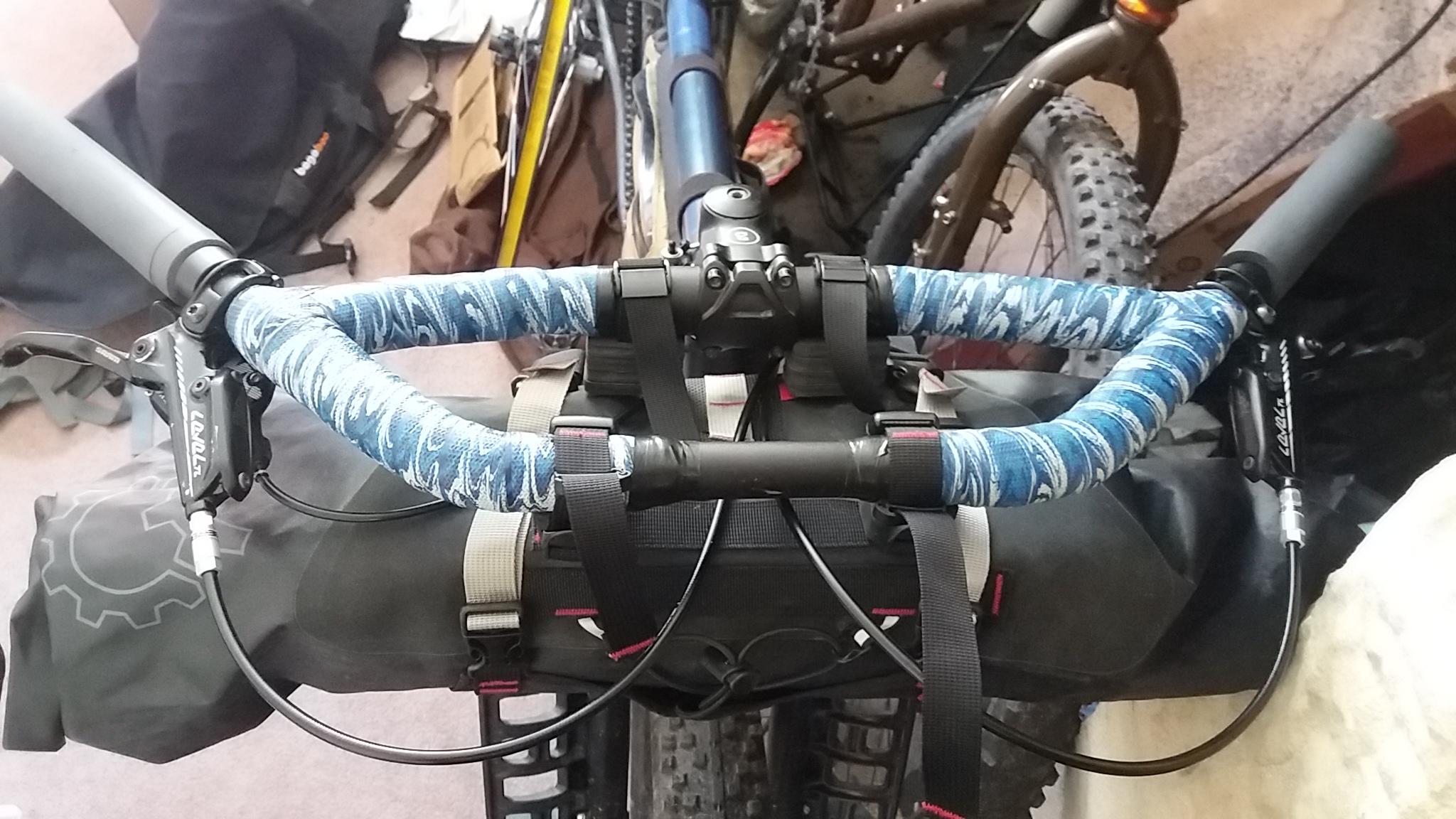 and still enough room for dyno light underneath.. 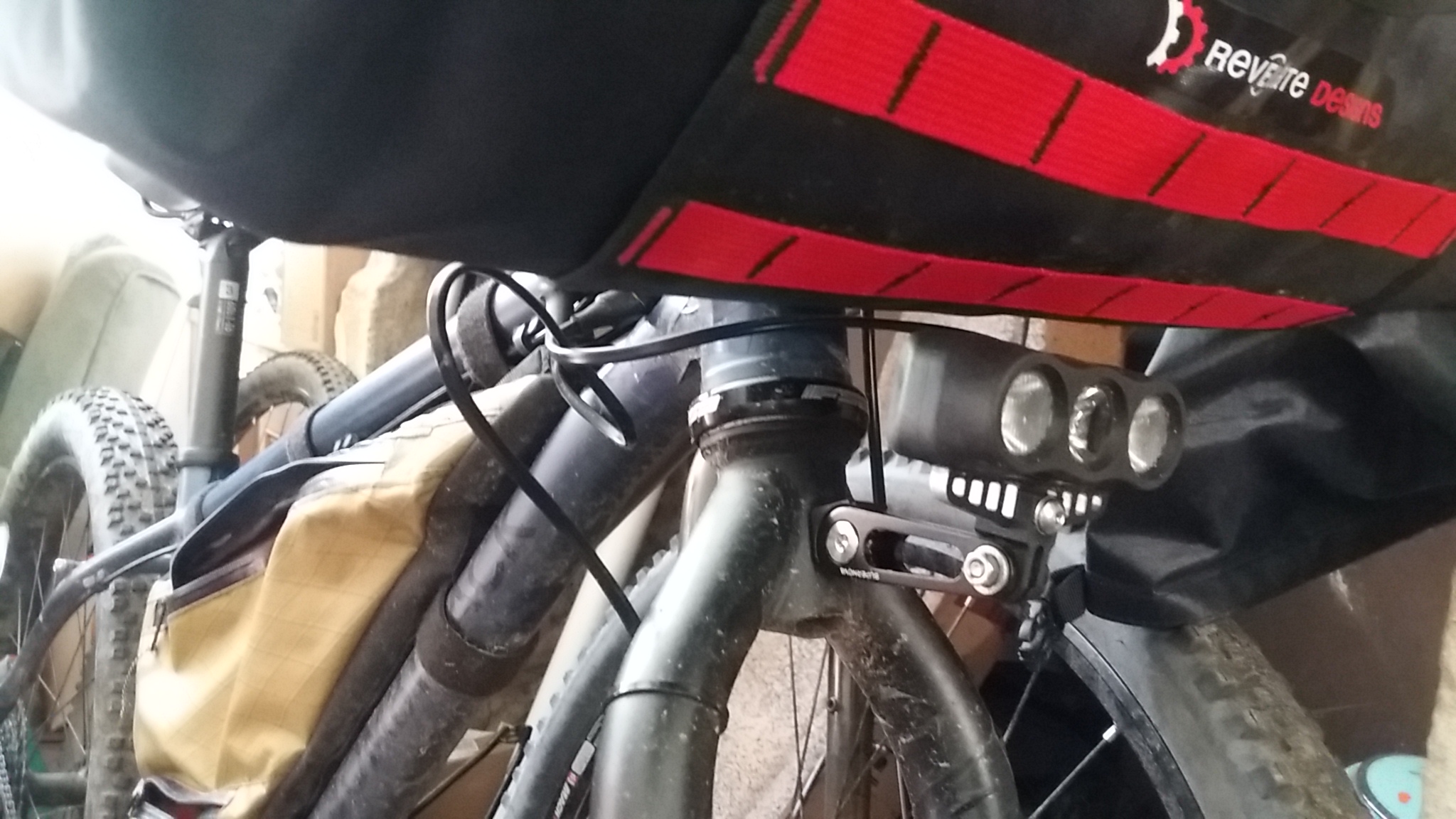 and for the ogre
another step closer to getting it put together. ive now got a one of a kind 12x42 hope 2 ss/trials hub. look forward to getting thr rubber on it and putting it ont bike but thats for another day
Top

Currently in the middle of my Thompson dropper post. I-ride want £55 for a service so instead I reached for the hammer and chisel....

It was making horrible creaking and cracking noises and had a fair bit of rotation so I figured I'd have it apart to see what was up. Took a bit of head scratching as the only info on the net I could find was a guy on MBR who took a stealth post apart. Had to grind down a small socket to remove the weird triangular headed bolt on the bottom, and grind a 14mm socket flush to fit the 14mm alloy top cap bolt. Thomson also like there ickle screws - one holding the actuator arm onto its shaft, one holding the cable outer stop and one locking the collar. Got the collar off with a bit of help from an old motorbike cone spanner and it all fell apart.....

Not much grease inside and the three plastic guide bushings were all loose (another six teeny tiny screws) - hence all the noise. Annoyingly I let all the air out before realising my marzochi adaptor didn't fit so currently awaiting a RS one arriving in the post before I hammer it all back together again. The guy on the MBR thread also had the cartridge apart but this looked a bit of a faff, particularly putting it back together again, so I'll leave mine. It sags a few mm from time to time but is otherwise OK.... 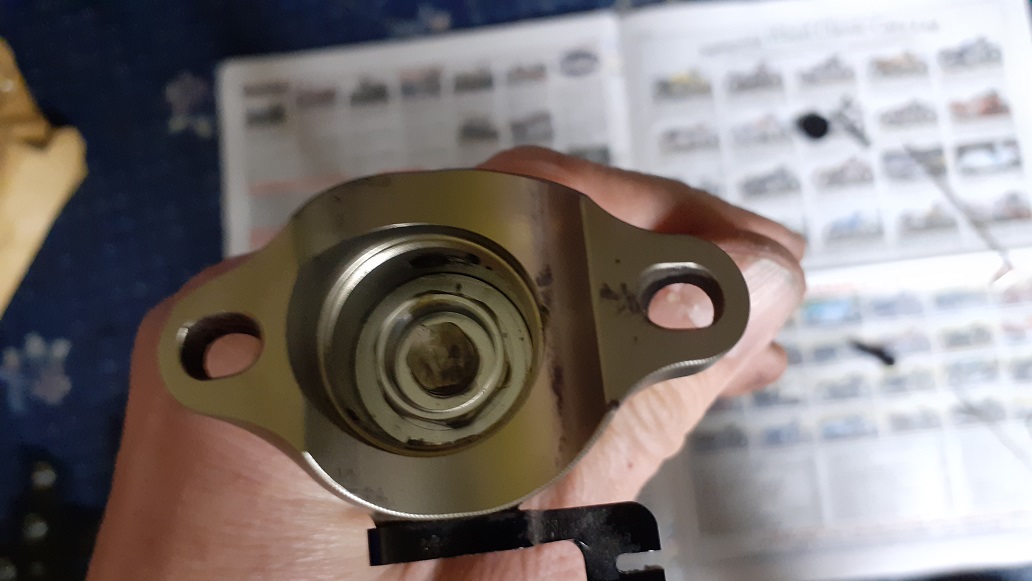 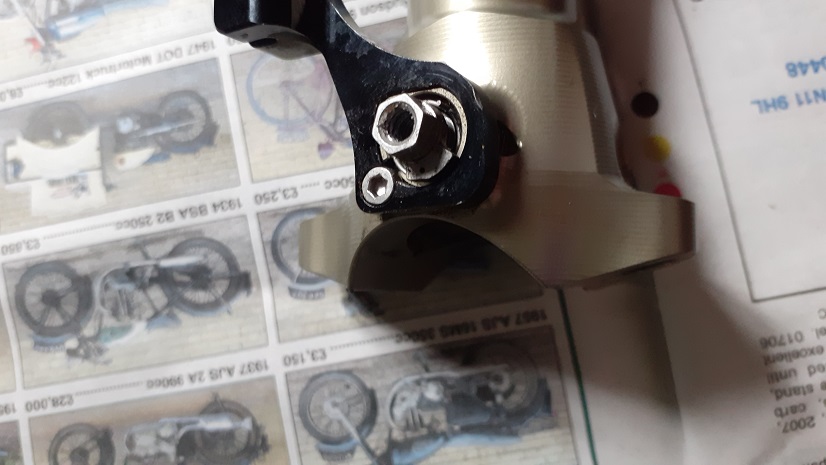 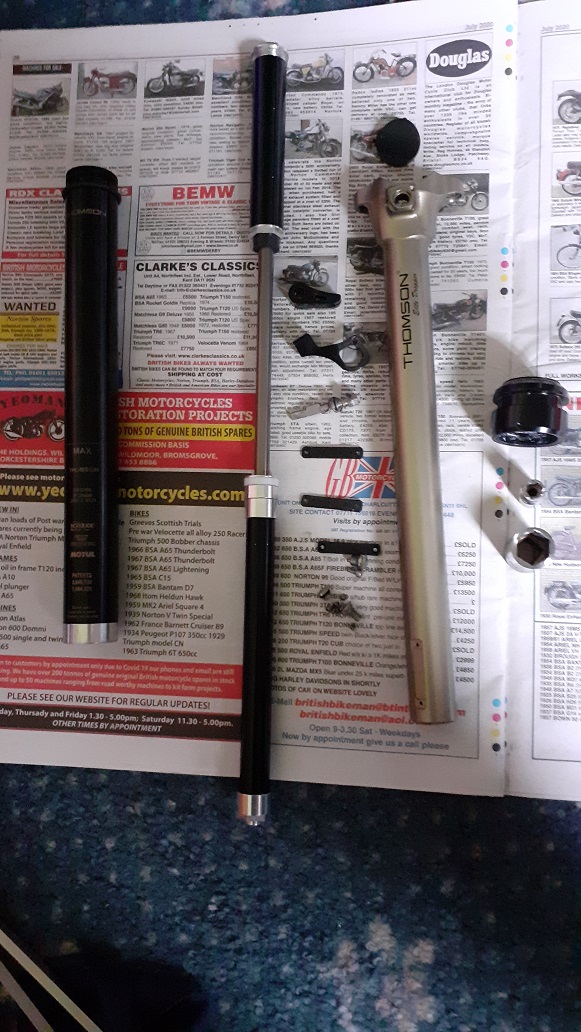 Took the first step to gravellising my bike today. Next steps at some point are 1:1 ratio gearing (unless I can get a cassette biggger than a 34 working with the r8000 long rear mech which possibly I can!) and maybe swapping the aero bars to the Salsa CowSummats... 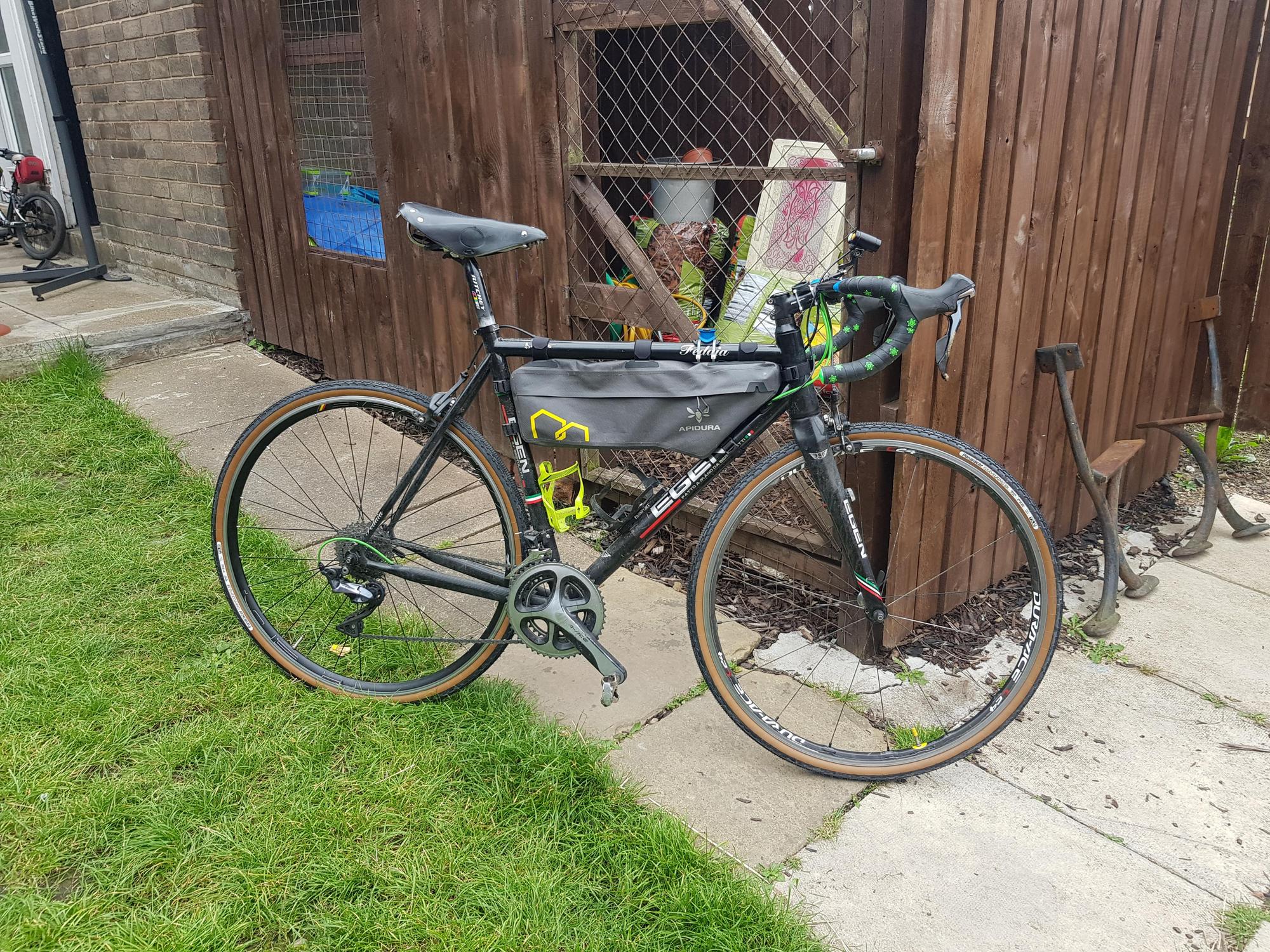 32mm GravelKings (with a satisfying Made in Japan label on sidewall) which measure up at 31.6mm front on Dura Ace and 33mm rear Hed Belgium Plus. Result I think, although when I finally get round to building the front Hed rim onto the 350 hub, I may have slight clearnace issues...

Even has a label on sidewall reminding the rider to TLC (take less c...)
Top

I thought you said summat similar once. Will see if they make cassettes in 36 flavour these days and grab that if its avaiable to give me best of both worlds (almost). Thanks Colin
Top

I nipped to the local shop on my SS this morning.
And prepped my bike ready for tomorrow's BAM
http://www.traversbikes.com
https://www.laufcycling.com
https://www.neris.co.uk
https://www.custommeritgear.com
Top

Prepping for WRT. Stripped BBs on two bikes - both mine but one’s for my minder. He’s never been bikepacking before. We’ll have to have a shakedown ride before then, I think.... 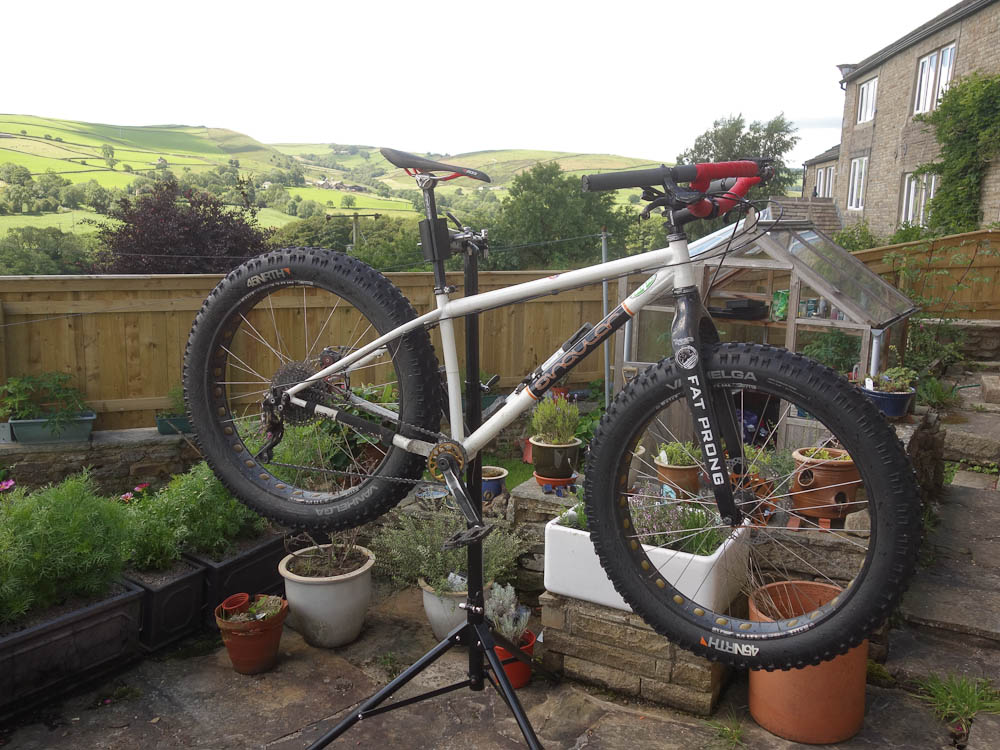 Yep, take one silly bike and make it even sillier

). I left the 26T chainring on and went with the only singlespeed cog I have which is 16T but that slips under even the slightest load so I purloined an 18T from an unused cassette and that's fine. Gives a 42" gearing. I'll see how it goes, if it's too low then I've a 28T chainring which would give 45" gearing.

If you need to free off the ebb Bob , Wurth have spray can called rost off ice , I was a bit sceptical when one of the lads on site gave a can to try as I wasn’t allowed to use oxy acetylene on site , sprayed the mechanism gave it a couple of mins and with gentle working everything was free , it is truly amazing squirt
Top

Don't remember the make. I've a feeling that the EBB has galled such that freezing doesn't contract it sufficiently to break the bond.
Better weight than wisdom, a traveller cannot carry
Top

Silenced the noisy internal cables in my gravel bike. Wrapped a load of foam around the cable and them shoved back inside the downtime, along with some long ended cable ties. Took it down a bumpy downhill singletrack this evening, and oh so much nicer!

Can't find the 'todays ride' thread and I'm also writing this for the second time so will abridge it a little more. I basically rode it and with it having some GravelKings that the GrvlGrndr crew would potentially be proud of, I was able to once again get off my main loop when I saw this sign.

It felt lovely as I really do hate road riding since it can get rather boring and tedious. But at the same time I need a road bike for work stuff and I refuse to lose this here frame. Yesterdays ride showed me that it had off roading capabilities but just needed some extra thought. So whilst I was protecting the pizza (or set of pizzas, not sure how many I'm guarding just yet!

), in between trying not to hurt my head and deciding whether this section needs walking, I decided on a few extra adaptations.
Other than that, the ride was nice. Managed to get off the boring road as much as I dared but then the climbing off road, in road gearing (albeit compact and 32 rear) is a bit tough, is it not... Did need 2 paracetamols (with over the counter grade codiene added) yesterday and this am to tackle the back pain (or was that the tiredness) but then thats very cheap for having the peak of Everest in sight for the second time this month. Thanks to Luke for pushing me on and actually wanting pizza.. lots of it. Oh, also managed to grab a fair few extra sqaures through this whole turmoil.

[Or maybe not cos they ain't uploaded to Imgur yet... Bascially their pics of bikes/a bike or some gravel or some road sections with a castle somewhere in between em all. Use yer imagination as it's possibly better than my photography skills].

So just to recap... The ride was nice and I need some bits to make it extra CXy but I can't actually afford so I might aswell just ride and keep yearning. Which is debatably the most exciting bit of new kit (is it not!). Anyway, anyone got a seatpin QR lying about

*I forget which one but its one or the other but to save the confusion I've given a hybrid name in the interim!
Top

I swapped the Genetic Digest bars on my gravel bike for a pair of Genetic Driser 16s. I really like the Digests but I was curious how I'd get on with a less flared drop and also wondered whether the rise would help me avoid numbness in my hands (which happened sometimes on the Digests). Riser drops, whatever next eh?

Drop bar risers... Isn't that going a bit too far

I've got Surly Truck stop bars on the Straggler (30mm rise) and they are ace! Flats now about 20mm higher than the seat level.

Anyway, tonights marathon involved the straggs XT rear hub. The freewheel was sounding a bit loud and was slightly loose on its bearings so I thought I have the whole lot to bits. Its the new style centrelock with an alloy through axle. 5mm hex key in each end and the QR caps come off. Unscrew the LH cone and pull out axle. Lo and behold both races and balls were mint with clean grease. Usually you get a drip of brown water followed by 24 rusty lumps previously ball bearings. Next up remove the freehub body. Reach for 15mm hex key and..... it doesn't fit! Yes it should be 14mm for an XT hub unlike the SLX and Zees, which need a 15

I need the bike at the weekend so I figure I'll just strip the freehub in-situ. My home made thing to unscrew the ball race then proceeded to chew up (I worked out its a left hand thread before doing this...). I now need to grind down a socket which will have to wait until tomorrow night. In the meantime I skooshed a load of spray grease in there and I might just leave it alone......
http://philsbikepacking.blogspot.co.uk/
Top
Post Reply
755 posts