Trail-rat has had some problems with at least 2 of them http://bearbonesbikepacking.co.uk/phpBB ... ge#p139839 though some (Steve Large and possibly others) haven't.

I bought one a while, as in 18 months to two years, ago but haven't actually used it - it's still in the box. We've got reason to use it now so after some experiences, pros, cons, etc. One thing that I know is a potential problem is the USB connection. USB was never intended as an interface for use in the outdoors, aside from the potential water ingress there's the leverage that the usual cables can put on the socket and how it's soldered to the circuitry inside. (we have problems with this at work - indoors with consumer electronics). I've an idea to mount the C2C so that the socket is to the side not over the stem or top tube, then I can mount a 90deg cable like one of these - https://www.amazon.co.uk/SuperSpeed-USB ... B0734HM44J and hopefully avoid water ingress.
Better weight than wisdom, a traveller cannot carry
Top

If the USB is a weak point then how about installing the converter elsewhere rather than in the steerer top cap? For example, in a frame bag. Then the USB connector can be protected from possible damage.
Top

Asposium wrote:If the USB is a weak point then how about installing the converter elsewhere rather than in the steerer top cap? For example, in a frame bag. Then the USB connector can be protected from possible damage.

A standard USB cable has the connector in-line so when you plug it in to a socket that's horizontally aligned there's a turning force due to gravity on the cable. Having a right-angle connector helps avoid this. Putting the device in a bag doesn't get round this as the cable can be put under strain by pushing against the sides of the bag or other items in there.
Better weight than wisdom, a traveller cannot carry
Top

The ewerk manages to work with circular weatherproof connectors to usb.
Is there any way you can modify your A to D unit to circular plugs and sockets?
You have to go usb at some stage as the equipment will be usb.
I used to just charge my power bank then charge off that not run things direct.
Doubling the lead back to the body of the equipment and held in place by electrical tape would take the weight off the usb connector.
You may be able to adapt bits of this.
https://www.sjscycles.co.uk/dynamos/bus ... cable-set/
Top

I have a cycle2charge thats kaput. It was a replacement for one that also went kaput. Could just be the chap emailing in what isn't his first language but I got the impression that the "fault" was with the user.

I've had two c2c chargers, one for about two years of faultless use until it was stolen along with the bike it was attached to

and a replacement for about a year. Both worked fine, but have mainly been used for paved and dirt road touring, so no really rough terrain. The times I've used it more off road, I've taken it off and kept it in my top tube bag to minimise the risk of damage.

The only issue I have with the new one, is that it doesn't seem to give as steady an output as the old one, meaning my phone screen is constantly switching on the show it has started charging. The old one seemed a lot better in that respect, now I charge my power bank and top up, rather than charging devices direct.
Last edited by Steezysix on Sun Feb 04, 2018 10:15 pm, edited 1 time in total.
Top

Having already bought a Cycle2Charge, we might as well use it. This image is one of Stu's, 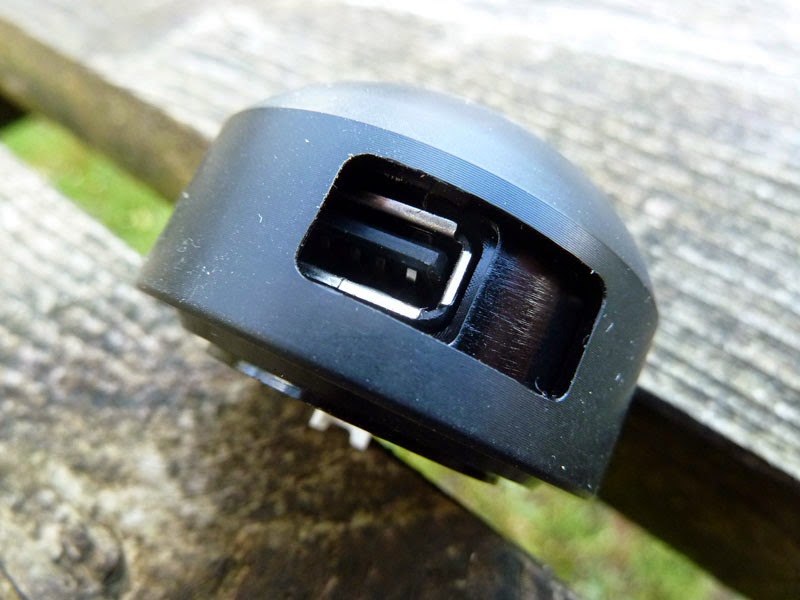 Even though you've something like a 20% loss due to the charge/discharge step of the powerbank I think that's the way to go, if only for simplicity. Pass through/cache batteries are tricky to get right plus you don't really need them to be massive, a single 18650 of 3000mAh is more than enough for that job but isn't enough to recharge the AA cells in an Oregon for example. So you'd need both if you wanted to, at least part of the time, run a device directly from the dynamo. Tout Terrain (who make the Cinq Plug) do a cache battery with the necessary circuitry but it's £90!

Doubling back the USB cable is trading one problem for another! The wiring and connections inside a USB cable connector just aren't designed for being knocked around - ever had a phone charging cable just, well stop working? It's caused by flexing the cable in the area just behind the connector. Using a down angle USB plug and fixing the cable a few cm further down so that there's little or no strain on the connector should alleviate or even hopefully eliminate this.
Better weight than wisdom, a traveller cannot carry
Top

I haven't used my C2C for a while, but I put it in the top tube bag, partly because of the (lack of )weatherproofing, and partly because the GPS fouls it if mounted on the stem. It's loose, but normally held in place by energy bars and other stuff.
Top

I've tended to use mine tucked in the bottom of a stem cell style feed bag or the front of the frame bag. That said, it's not been much use the last couple of trips as at sightseeing speed it doesn't generate any meaningful oomph.

I have thought about wrapping tape around the usb joint for a little more waterproofing and I suppose that could brace it somewhat?
Top

I always charge a cache battery off my cycle 2 charge then recharge gps etc at night form the cache. I have carried a lunking great 10000mh battery in the past, but will probably try a 6000mh for this year. Ive had problems with usb connector on cycle to charge but had good backup service from Germany. Have had similar thoughts about right angled usb cable to help minimise strain on port . I have been thinking about buying a bag for the loop bars to keep the cache in that and therefore on the level. I also tape up the top of the unit to stop water getting in via Allen bolt.

The weak spot I've found is always the leads especially from the dynamo to the unit via the little white plug - I carry a spare because of this. Spares I can only get from Cycle 2charge so does anybody know a uk source? Maplins don't stock those fiddly white plugs.

For the price and its ability to charge even at my speed its proven to be a good deal.
Top
Post Reply
10 posts • Page 1 of 1