How is Gairy managing to post things on here with both arms, one leg and 5 ribs broken?

One of the reasons I will eventually get around to restoring one of my 94-95 FSRs is to use as a bikepacking bike on tougher terrain. Perhaps not 'Alpine Ready', but we're looking at 60mm rear travel, up to 100mm in the front, and a sizeable front triangle to take a decent frame bag. Tange Prestige front triangle too

If I was in the market for a modern 'trail' bike, I'd be looking at a 'Rocket' too, I love how they ride. If you want something modern with a larger front triangle, a quick search tells me you could probably do a lot worse than a Giant Trance. Frame pack and 'reverse' fuel pod (in front of seatpost) would give you a fair bit of capacity..
Top

Has anyone ridden an On-One Codeine?
What value a life half lived if the half you lived was the wrong half?
Top

From what I know (interested in riding the Colorado trail sometime and talked to a few who know both CT and HT550 so I have a reference) I believe the trails of the CT are smooth in comparison to much of the Alps. As a typical Homo sapiens alpinum cyclensis I do much believe in suspension.
I too ride a ssp full rigid bike, but 2-3 days on Alpine single tracks - not the smooth stuff found in marathon races – always have my wrists in pain. On a FS bike I can ride longer and add multiple days to each other and my wrists will get tired but not bust.

Riding in the Engadin in Autumn, rigid, ssp. Most of the gear in the rucksack.

Yes, there's stuff I wouldn't dare to ride with this bike but ride it with my long travel 29er. Stuff where the loss of traction is just a bit sketchy...

I know some who “rode” the Hikers Haute Route on rigid bikes and never had any wrist problems. Going into the details we found that they pushed almost all of the steep descents… no wonder the wrists where alright if you push down… down the most fun parts to ride…

If there’s a place for FS bikes, it’s the high mountain paths in the Alps.
Be it bikepacking or not.

I can’t really comment on 27.5 bikes. I know a few like the Trek remedy and Koba Reamol and they’re fun. The Reamol is too compact though. The Remedy a beast. Close to the bike I’d get if I was in for 27.5 wheels.

Any 140/150 mm FS 29er is a handful of bike. Some feel nimble, feathery and are easy to handle, but you’ll need light weight wheels. Depending on riding style and capabilities, light and stiff will be rather costly.
I can only recommend long travel 29ers to folks who only ride 29ers and nothing else.
From the bunch I’ve tested the Bold Linkin Trail LT felt best balanced for long days in the Alps on no matter what sorts of terrain, some assisted riding, even bike park trails.
Niner RIP RDO was nice to ride too, but it’s BB is not very Alpsfriendly (too low).

In the 120/130 mm segment the BMC Speedfox and Trek Fuel EX and Bold Linking Trail are amazing bikes. The Fuel is the most capable when pointed downhill. The Bold feels more efficient in twisty and techy stuff, awkward traverses, blocked trails etc.

Kona Hei Hei DL.
Get it, throw some lighter, stiffer, betterer, more shiny parts on it and you have the most fun short travel beast mode bike for the Alps and any other challenging (by Terrain) route. The 2017 model comes with boost and takes 2.4" on 30 mm internal. Due to the seat stay design (for lateral stiffnes they are very wide) 27.5+ will not fit.
The numbers are spot on. Good sizing, superbly balanced angles.
You get quite a lot of room on the frame, but might be happy to sew yourself a top tube bag to strap to the seatpost. One that evens out the TT slope, rather than more height to it all over.

Scott Spark is a good bike too, but it feels like two halves of two bikes. Front felt too slack, 0.5-1 degree steeper HA and it’d be spot on. I think Scott wanted too much enduro in this bike.

Yeti SB4.5 is utterly fun too, but unfortunately the frame design is bullocks for bags.

I regard the Tour du Mont Blanc as rather easy and find a setup for routes like that ideal:

On the back I carried the discontinued version of the Camelbak Charge.
https://www.wareega.com/sac-complet-hyd ... gIwhPD_BwE

For difficult stuff I only use a frame bag, the rest is in my Inov-8 Race Elite 25 (discontinued too). Sometimes a Berghaus
https://www.bergzeit.de/berghaus-hyper-22-rucksack/
The easy part in the Alps is, there's a sheltered place under a rock or hut (not necessarily an SAC/DAV/ÖAV hut) around almost every corner to give shelter of some sorts.
The more tricky part is, if you follow a really challenging route, it can take you longer to get there by bike, than without...
You can get away with very little gear if you know the Alps a bit.

I'm off to a 2 day trip very soon, then off to a 7 day trip quite soon and the routes are heavily focused on the technical side of mountain biking where you need basic trials skills and the climbing is almost all hike-a-bike or carrying. In such cases I want the bike to feel as nimble as possible when riding and have a rucksack so I can rest the bike on it when carrying. For me it's much easier to throw the bike around and hop over stuff, drop off things with most of the weight on my back instead of on the bike. The bike is being moved around most, see's much more movement than my body. In such cases I rather have the gear in the place with less movement.
In the last 12 years bikepacking in my playground I learned that a high CoG is better than weighing down the bike. Trust me, a bike with 3-4 kg of added weight is worse than a rucksack once the terrain is rough enough.

It's much easier to unweigh the bike if you're carrying the gear on your back.

Gairy, Eddie was talking just this week of a trip out to ride your trails and now we're all full sussed i'm very tempted.

I have a cotic flare max in large and i think you would get a half frame bag in above the shock.

I am very impressed it rides very nicely. i have no full sus experience to say it's better than another one. But i did a couple of demos (out of curiousity) and ended up buying.

evilgoat wrote:Gairy, Eddie was talking just this week of a trip out to ride your trails and now we're all full sussed i'm very tempted.

And great, get it organised! Tell Tedward to give me a shout.

When my bouncy bike needs replacing I'll likely get the Cotic.
Top

Codeines are terrible. Especially in the Alps.

Except mine. Which is ace. 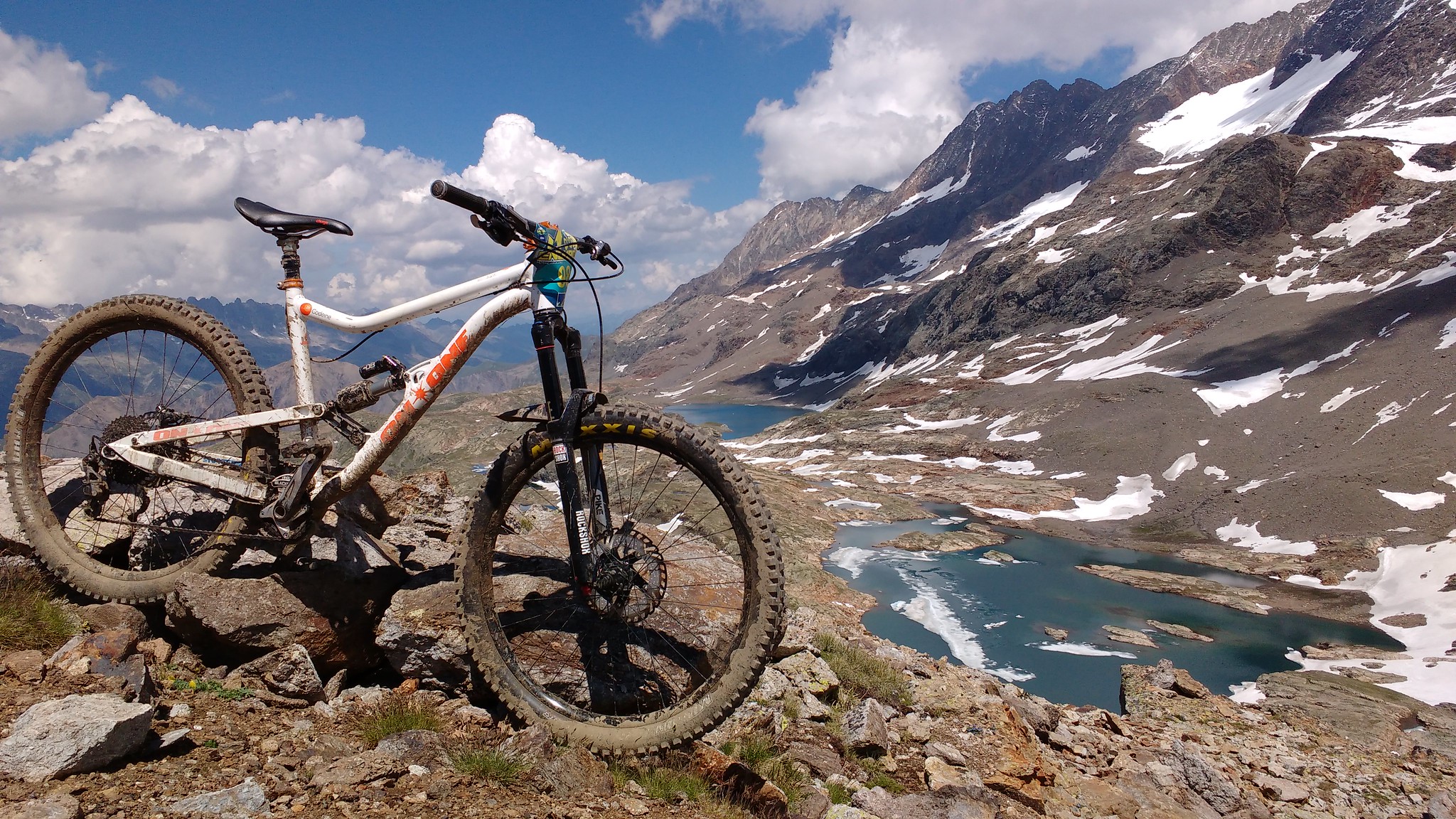 Alpinum, that second pic is ridiculous, I would definitely be walking my bike on that!
Top

Alpinum - some sage advice there from the guy who knows big country. Interesting point about frame bags V backpacks & CoG; different to what I've read from others such Neil Beltchenko; I suppose the dynamics depend on riding style and are more complicate than simple static stability.

Having owned 3 different 29ers, I do appreciate their strong points, but (as short bloke) never felt comfortable on steep descents. A dropper post (negative saddle bag) would probably help, but I am reasonably convinced the right 650b frame will have geometry that works better at my scale.
Top
Post Reply
34 posts