8 miles on water floating and paddling down stream 1 boat puncture when I attempted to get out in a fast flowing part of the stream and a rusty nail got my pack raft.....
It's amazing how the ppptttttttttsssssssssssssssssshhhhhhhhhhhhhhh sound focuses your mined when you have a bike on the front of your pack raft and you need to get out of the water sharpish

Now patched and tested and all ok 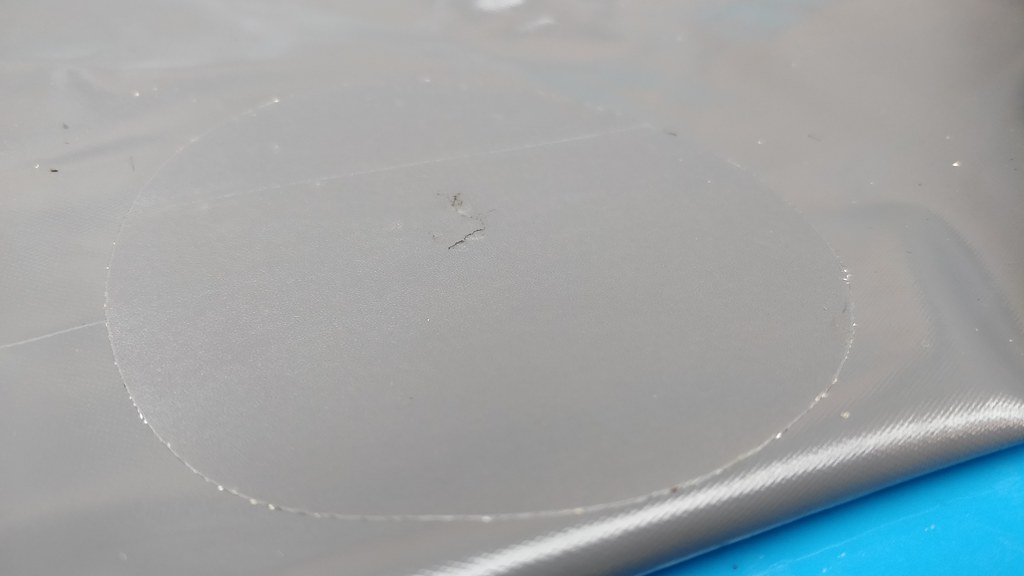 . Glad it didn't result in the traditional Boxing Day Swim for you John!
"There comes a time in your life Ponsonby, when you think: 'My God, I'm two-thirds of the way to the grave and what have I done?" - RIP

There was a bit of but clenching going on I can tell you...

I finally got out for a ride on my new-to-me fat bike wheels - Stans Hugo rims built on El Guapo hubs and shod with 3.8 Surly Nates - on my beloved OOFatty. I've not ridden tyres this size for quite some time having swapped over to 27.5+ and 29ers for bikepacking duties. But when pushbikemike posted these in the classifieds it was a no brainer. Had to have them.

Today, 25 miles of Chilterns gloop at around 10psi and I was reminded of the miraculous self-steering properties of fat tyres, and the fact that they just don't want to go round wet muddy corners too quickly. But point them at a muddy bog, stick it in your granny gear and they just churn on through. They're pretty comfy too. Thanks again Mike. Hope things are well with you.

And here's a pic, so it must have happened. 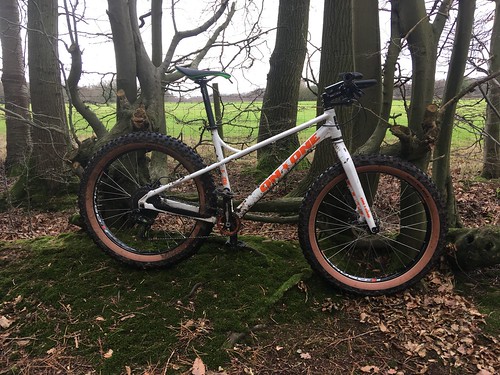 Not an MTB ride but a road ride, getting in a 100km ride for December. What was interesting wasn't so much the ride but how I felt. For most of this year I've felt somewhat jaded and everything has seemed like a struggle but today I felt really quite spritely with my times on some of the hills being close to those of five years ago when I was about 8kg lighter.
Better weight than wisdom, a traveller cannot carry
Top

This mornings pedal to Llandudno and around the Great Orme.
By god I felt the effects of eating and drinking over Christmas!! 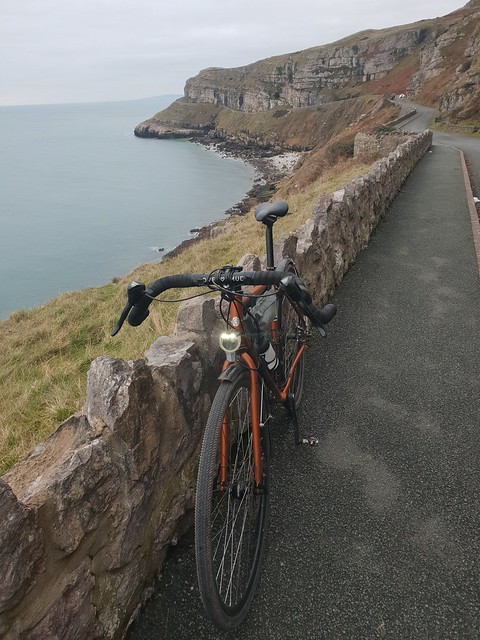 Had a good day out today, took a couple of chainsaw blades for sharpening at "local" firm 40km away. Carried on along the river Ebro onto the Delta with it's maze of gravel tracks and lagoons then back along the seaside up to home. 122km 700m of uphill constitutes about as flat as it gets around here.
Even took a selfie! The thin pinky white line behind me is a flock of about 500 flamingos wintering on the delta. 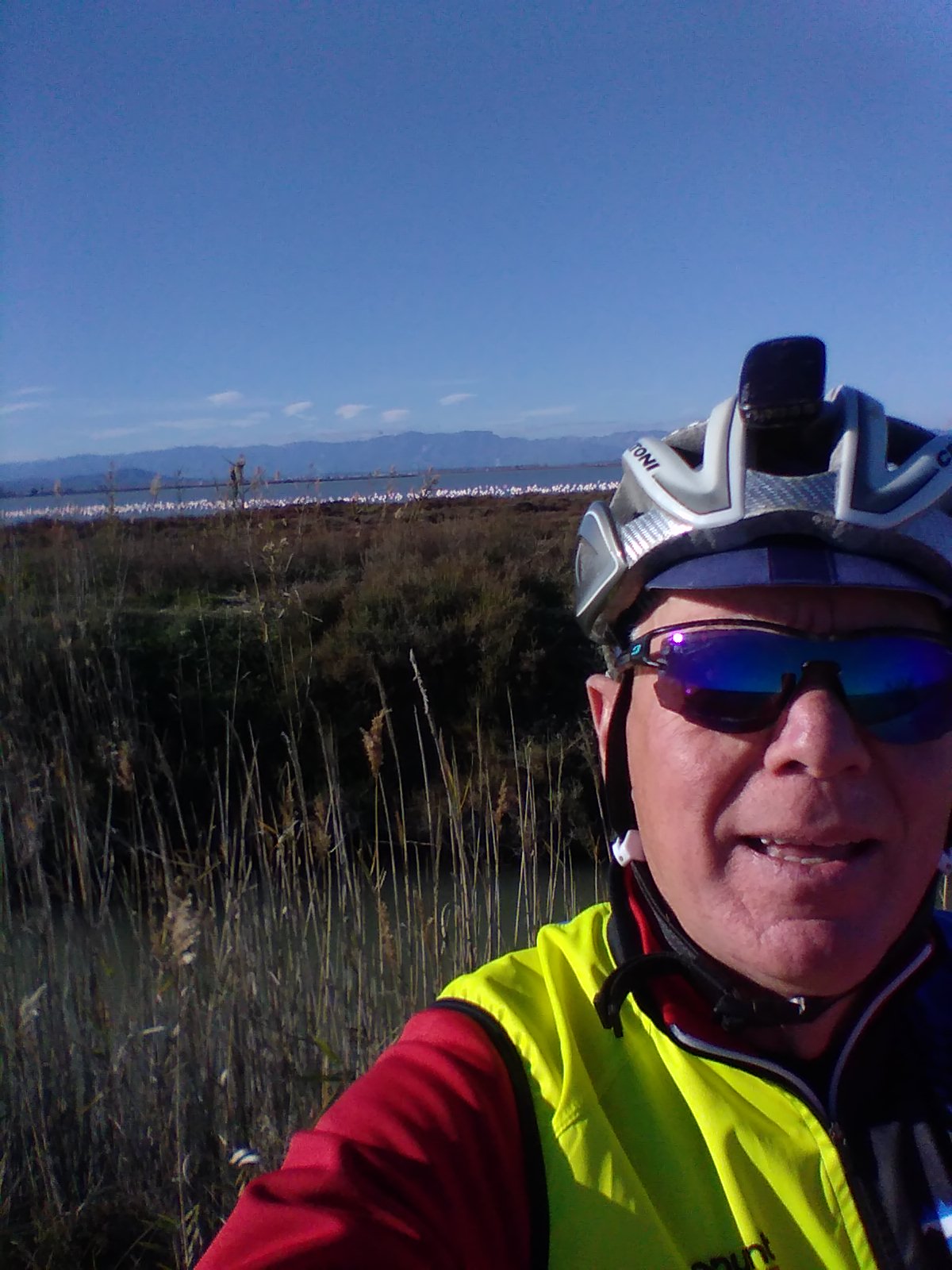 Went for a bit of a cheeky ride today. There's a hill to the south of us that has no bridleways and the estate are one of those that isn't happy about any public access even though the land comes under CRoW. Looking at Strava heatmap it seems like more than a few folk had ridden over it so with a bit of snow having fallen yesterday and the clag right down I set off.

I took the Pennine Bridleway to meet the Widdop road then up the steep part of this where I met a bunch of roadies - I don't know who was dafter: them for being out on snowy roads or me about to head in to the mirk. Anyway I set off up the one track leading to the hill which worryingly had one set of quad bike tracks in the snow. Was I going to meet the farmer and have my plans scuppered?

Fortunately the tracks turned off so I was definitely on my own. A quick break at the end of the track and to sort my bearings out. 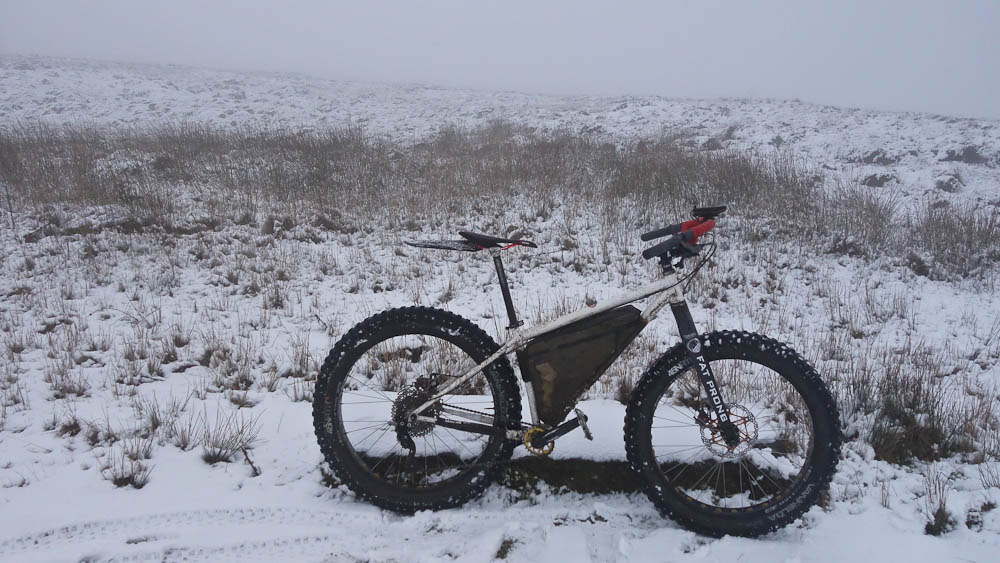 One small beck to cross which involved a bit of pushing up the steep bank on the other side then I could ride most of the path as what would normally be bog was now frozen, well almost - there was the occasional "crack!". Slowly the path steepened and I had to push then carry the bike to get to the summit ridge. Yesterday's snow had built up on the fence (this type of build-up is always on the windward side of objects) 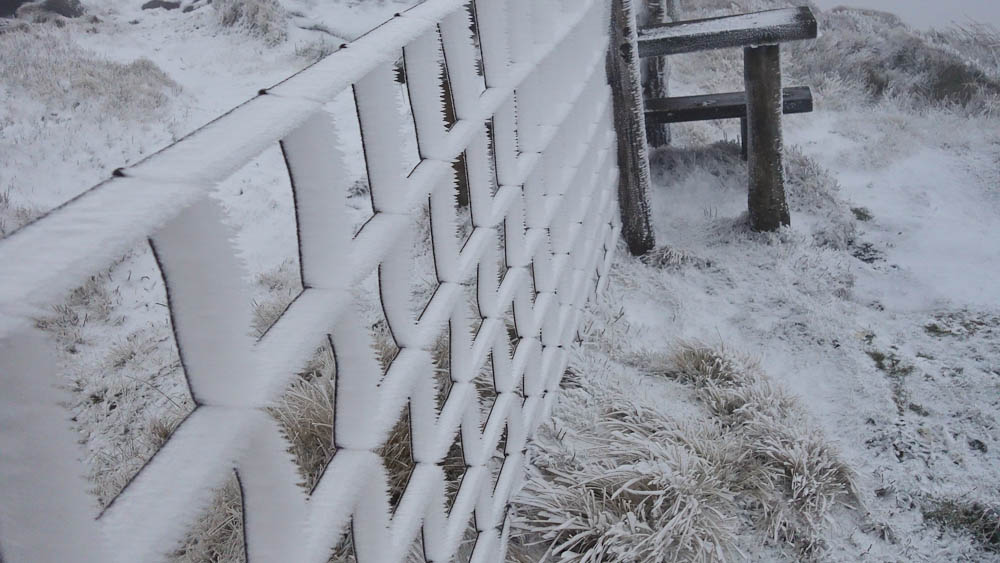 The summit ridge was great moorland riding, everything was frozen so the normally boggy areas were just plain sailing. The summit trig point came and went but now there were a set of footprints in the snow and the path was marked with regular little red flags stuck in to the ground, possibly marking out a fell race but I'm not sure.

I knew from the map and from Strava heat map that there were two descents but the first dropped to a farm. All I remembered about the second was that one of the segments had "grassy" in its name. The flags headed down the first so backtrack a bit and hopefully pick up a track to lead me to the second. Some suspiciously straight lines in the vegetation showed where people had ridden before and soon enough I was heading downhill on a grassy track. Steep enough at first that my back wheel would lock up under the slightest braking. A few minutes and I was out of the thickest clag and could see the PBW again.

Back along this then some road work heading in to the wind to get to the next bit of cheeky riding. Fortunately the cafe just before this was open so time to warm up by their fire :D The next bit of track is part of the Pennine Way, I've ridden it before but not under snow. Some of it is flagged but there's quite a mixture of surfaces from easy grass to nadgery rocky moorland track so it's 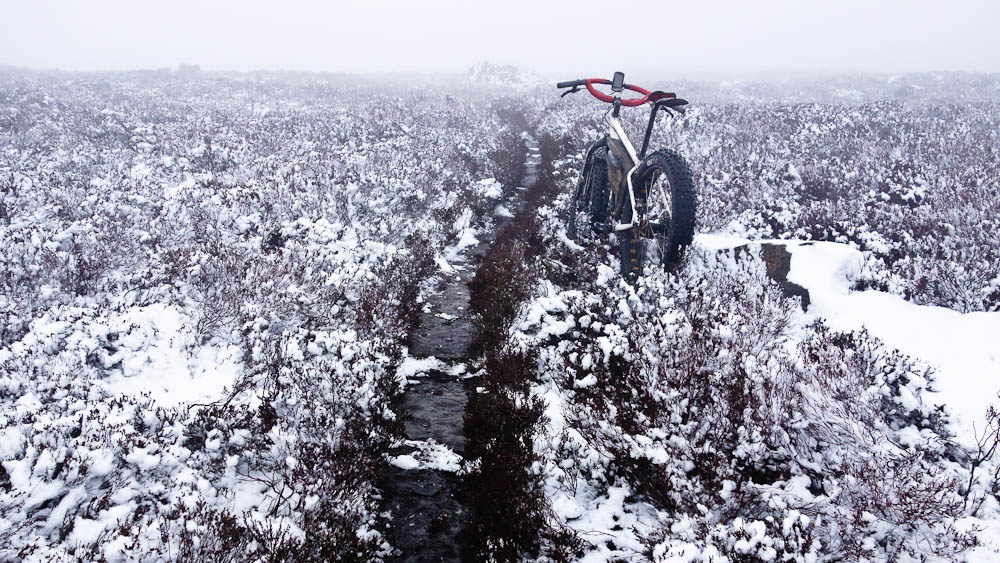 This is a shooting hut, unfortunately locked so no use as a potential bivy 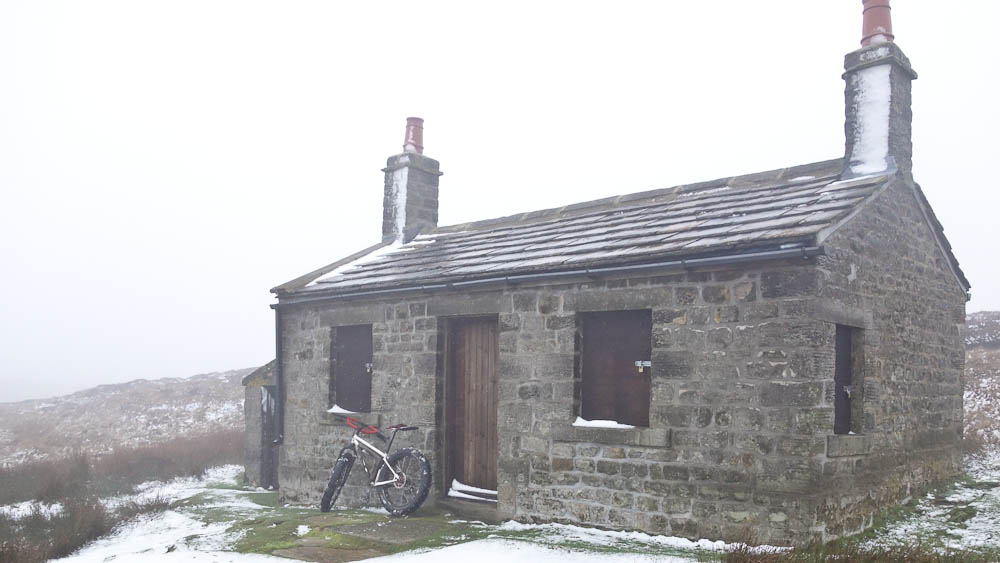 This is one of several other huts near the shooting hut - it's just over the skyline. You can just make out a couple more in the mirk. I originally thought these were also shooting huts but about ten years ago when I was running over here on one of my training runs there was someone at this one so I stopped and had a chat. It turns out that they were built by the local villagers as convalescent huts for soldiers from the first world war who'd been gassed, the air being much cleaner up on the moors than in the villages. 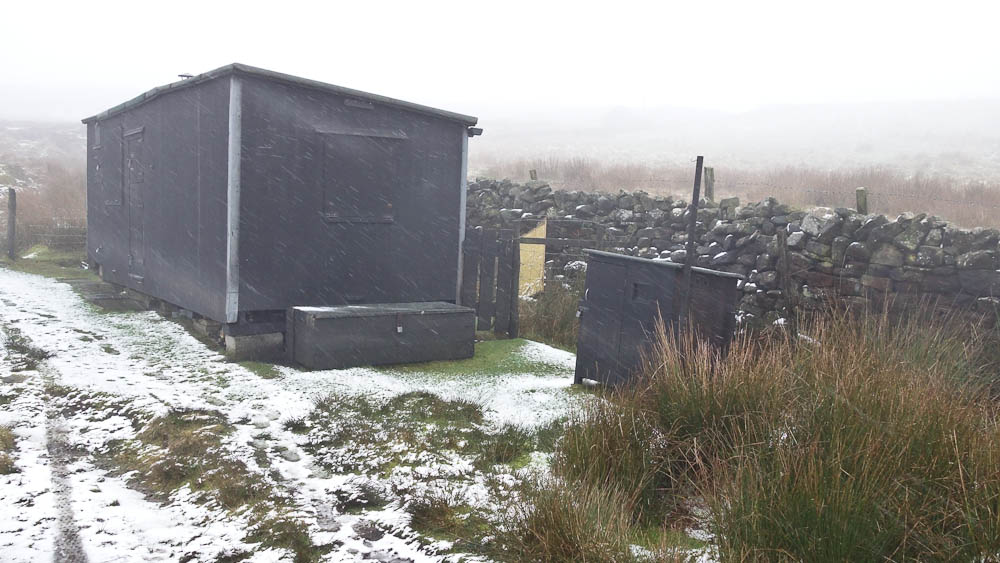 There's a section of super techy riding below these, not steep but it's almost hopping from boulder to boulder. Fine if your name is Chris Akrigg but for the rest of us it's easier to walk. Once off the moor I happened to go past a motorbike trials event and then it was road and a couple of short bridleways back home.
Better weight than wisdom, a traveller cannot carry
Top

Thought I'd have a play

so got a lift with Cath to her work. The sleet had stopped so decided to ride over Barden Moor and then see how things looked after that. The snow was down to quite a low level, maybe 250m, but the ground wasn't frozen so it was quite hard work until I got on to the moorland tracks then it was just hard work

Definitely chose the right route as the sun was out and there was an inversion in the valleys. Didn't get many shots as my phone doesn't like the cold so shuts down (wimp! Stop being soft 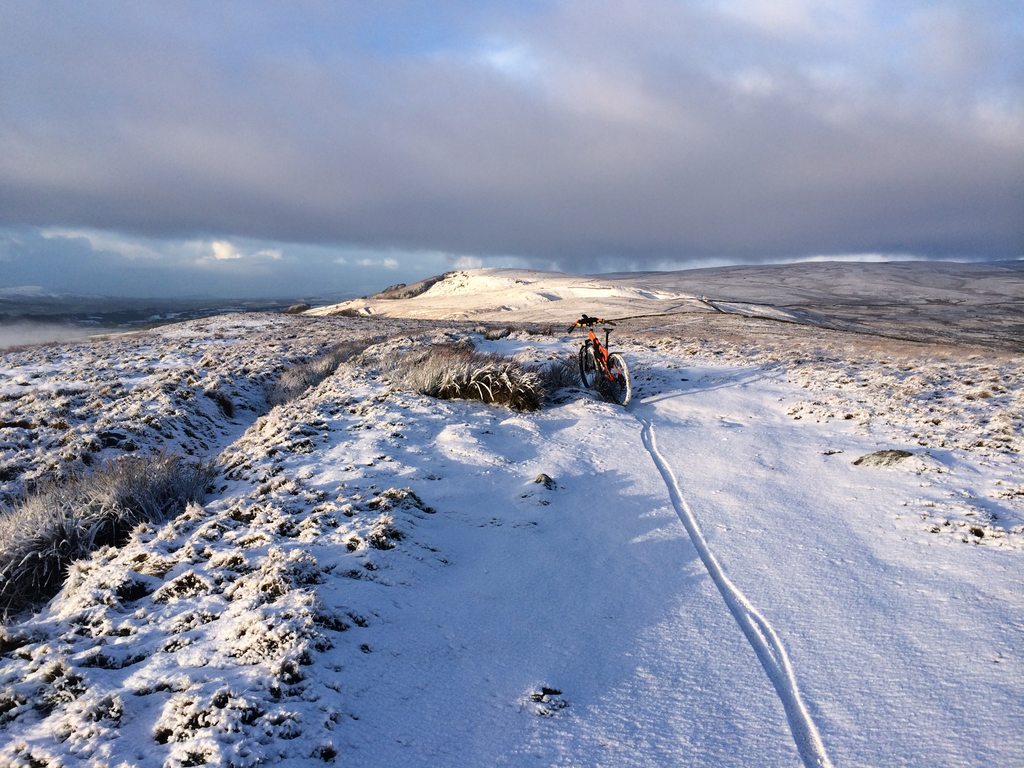 Got in to Skipton just as a snow shower was coming in so cafe time while that passed then home.
Better weight than wisdom, a traveller cannot carry
Top

First decent ride (50+ miles) since I got here...left at 4am...still got sunburnt returning at 9am. Gotta remember that sunshades are valid even at stupid o'clock in the morning.

Scattamah wrote:First decent ride (50+ miles) since I got here...left at 4am...still got sunburnt returning at 9am. Gotta remember that sunshades are valid even at stupid o'clock in the morning.

Great to hear your getting out on the bike Scott, even in that heat!

Hot is an understatement. I lost well over a kilo in fluid loss during that ride and a full day to recover. My BBB 'Stop Being Soft' sticker was leant on a few times near the end of that ride. Trail Boss are not the ideal tyre for that particular run.

Still not much snow!

Did a 50km loop round Loch Garten, Forest Lodge and Ryvoan today in search of some white stuff. It's mostly compressed and icy but I found some nice stuff in Abernethy Forest.

Some more fresh snow overnight and the trails are riding superb!

No snow here sadly but plenty of ice - wonder if the canal would make a good cycle route? Quick outing to try and blow this bad-cold lurgi away, and to test these new GP-1 grips replacing worn out normal ones. The little wings do indeed seem to give a comfier feel.

A play in the snow. Start on Llangollen canal, climb up to the Panorama, pass the top of Worlds End, across to Llandegla, up to the radio masts, down to the Ponderosa for a sausage-and-egg bap, before coasting back to the canal at the Horseshoe waterfall.
Hard going in the snow, 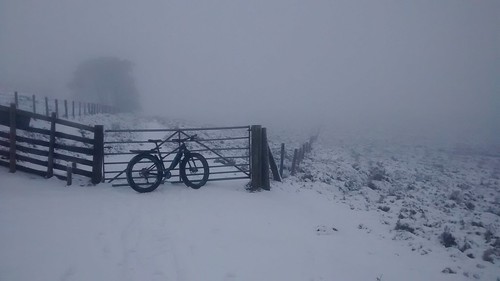 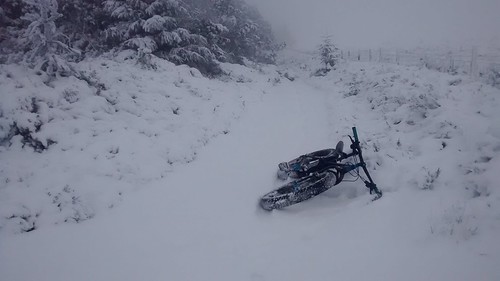 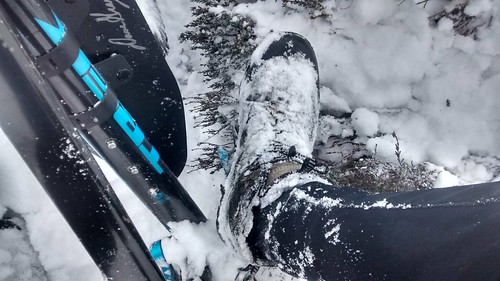 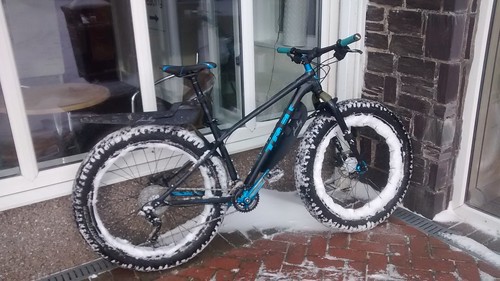 Some pretties seen on the canal-side... 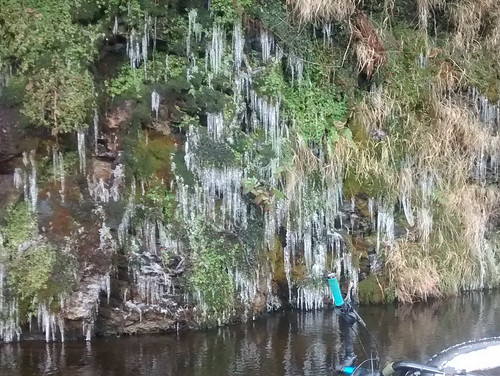 A bit chilly out there tonight 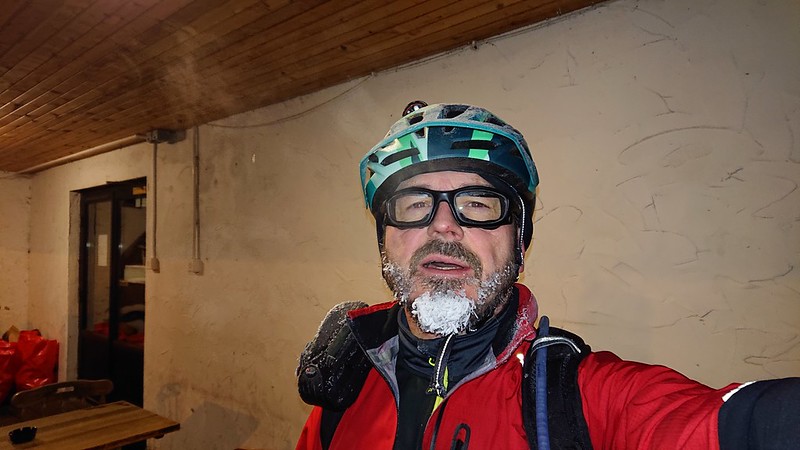 Went for a ride up the local hill and took the GoPro as I haven't used it for a while. Nice and chilly and some clear skies for once. Just a dusting of snow down at our level but on the tops there was around 2-3cm, with frozen ground it didn't hinder progress too much.

Don't think you can embed video on here so here's the link https://player.vimeo.com/video/314842283
Better weight than wisdom, a traveller cannot carry
Top

whitestone wrote:Went for a ride up the local hill and took the GoPro as I haven't used it for a while. Nice and chilly and some clear skies for once. Just a dusting of snow down at our level but on the tops there was around 2-3cm, with frozen ground it didn't hinder progress too much.

Looks idyllic, pretty sure if I try to follow suit tomorrow it'll be all slush and frozen bum cracks

Went for a ride up from Hetton, over Boss and Threshfield Moors, on to Mastiles Lane then back via Weets Top. The Revelate Wampack certainly works 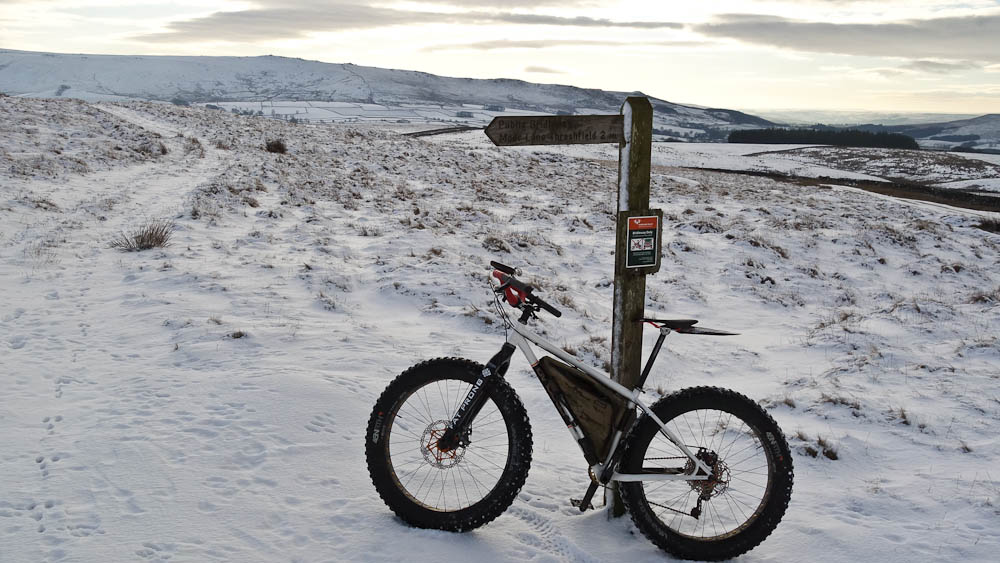 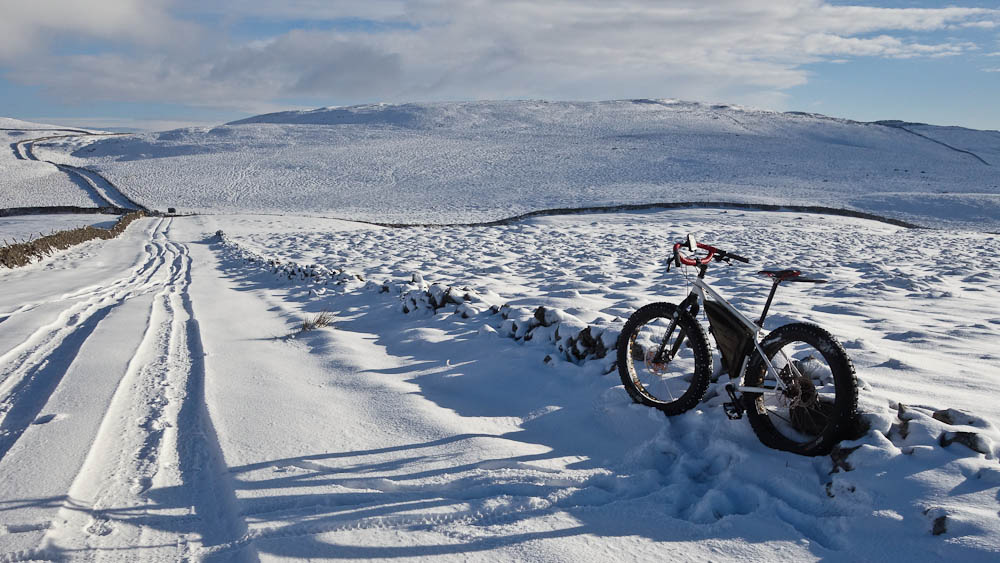