It seems that there a good number of folks on here from all over the uk and further afield and I'd guess we ride in a lot of very varied places at different times of day and year with very different bikes.

I thought it might be interesting (hey, it may not be!) to see what people are up to on a daily basis. I know there's loads of great posts about peoples adventures but less about the day to day type of rides. So I'll start...

I had a couple of steady hours out on the road today. Took back roads out to hathersage, hope then cut through to bamford and the long climb up back to Stanage. It was savagely windy (seemed to be a head wind all the time!) and rained for the last hour but I loved every minute.

We've a lot of snow on the ground since Boxing Day night but it seems to have all vanished overnight.

Today the weather was horrible - wet and very windy. Plans for a long ride were duly deferred until tomorrow, and I went for an off-road run today instead.
.Wildcat Gear | Shand Cycles
Top

We walked 14 miles from home via an old hill fort and the Ridgeway. I do this as a short MTB loop and it is ACE to walk it instead and see so much stuff you miss when zipping by. The most disconcerting of which was over 50 smashed clays on the bridleway next to a shooting range.
Elite keyboard warrior, DNF'er, Swearer
Top

Night ride at Glentress to see in the new year. Bivvied up there. Another loop today
Top

Had a few miles over to Rugeley, stopped for a brew at Paramarts
Viscous headwind all the way there, with Sticky slippy mud under tyre
The tail wind home was nice, but my legs were buggered from the first half and got the best of the weather too (just a few light showers)
Nice roast lamb dinner was waiting for me when I got home :)
2924 miles per Gallon
Top

jamiep wrote:Night ride at Glentress to see in the new year. Bivvied up there. Another loop today

Is it okay to bivvy up there? Up to the meteorite stone a wee while back with a friend, and there seemed a good few places...

Nursing a massive hangover after the New Year festivities the weather outside was unappealing to say the least. There was a break in group apathy which resulted in a stonking ride around Whinlatter. Well worth the effort

It was a bit wet though, a great hangover cure.... lol

had an awayday to the fod nice to use gears and suspension again, weather brill trails muddy
it's not that I can and others can't, it's that I will and others won't.
Top

Still in recovery from the little op so it is going to take some time to build back up but slipped a few extra hills in today.
Headed out through glossop, over holme moss, through holme firth and then via Dunford bridge and down the woodhead before heading home. Still stuck to road bike only for a bit and despite the brutal winds it was great to be out a longer than 40 to 50 mins
Top

Had a nice 40 mile road ride out to harrisons rocks near tunbridge wells yesterday, met some friends, bivyed, did a bit of climbing this morning and then cycled back again. Drinking tea now and pondering tomorrow's ride... See where the wind takes me I think...
Top

Functional road ride- 12km each way the slightly less direct route to work and back.

Up early ish:-/ Train to edale up jaggers, along and down to Rowley bridge over to fairholmes via the flying mile. Cuppa and dodgy flapjack from the kiosk then back via stanage and some cheeky trails back into eccy woods. Just over 40km and 1200m in 2:30.

Was very cold, damp and claggy early on. Hail later that turned into rain as it warmed up. Nice! Actually quite sunny now...

Easy 42Kms around back lanes and B roads west/south-west of Shrewsbury this afternoon. Getting tired of frozen feet though.

Hard bordering on painful 75mile Hope audax. Weather was abismal and caused lots of problems with hands and legs. No real power in last 10 miles.

Still, good to bank the miles ahead of the Cx sportiv later this month

Fitzy - mtb should be up and running after payday so can come out to play and perhaps bag jan bivi!
Top

20 or so kms to work and back. Very skippy in places at 6:20 this morning :-0 beautiful sunny evening and sun set on the way home.

Nice ride out from Torquay to Sharkham Point past Brixham via as many off road routes through various woods on the way. Had a quick brew up on my new little solid fuel stove and than rode back home. Very nice.

Back to the humdrum of commuting tomorrow...

75 mile off road route today taking in lots of stuff that *should* have been easily rideable.

Dave Barter wrote:Compelled me to write this sanctimonious blog http://phased.co.uk/remembering-the-fallen/

Some superbly amusing phrases in that - cheers

Just a short MTB for me today, up into the high Beacons. Couldn't see a thing for the fog & mist, and it was -2 to boot. It was fun though. Just shy of 30 km ridden, but after a short breather, I did then go out for a run to round the week off. 19.5 hours on the bike, ~230 fat bike kilometers, 5000m ascent + 1 hour of running. Finally getting into the groove for Rovaniemi.
.Wildcat Gear | Shand Cycles
Top

Took advantage of the frosty start to ride to the Ochills from my door and then up into them for some snow riding (5th snow ride this season so far) It seems the rain that hammered here on Friday all fell as wet snow above about 300m. This was now frozen and made for easy going lower down but as the altitude went above 500m there was a soft layer underneath = breakable crust = incredibly hard going not helped by storm force headwind which kept blowing me over... Still, good hike a bike practice! Heading back down the temps were going up so the crust soon became porridge through which bud and lou plowed a wide furrow. 65k in total in 6 and a half hours, now wrecked!
http://philsbikepacking.blogspot.co.uk/
Top

A few icy miles in the sunshine. 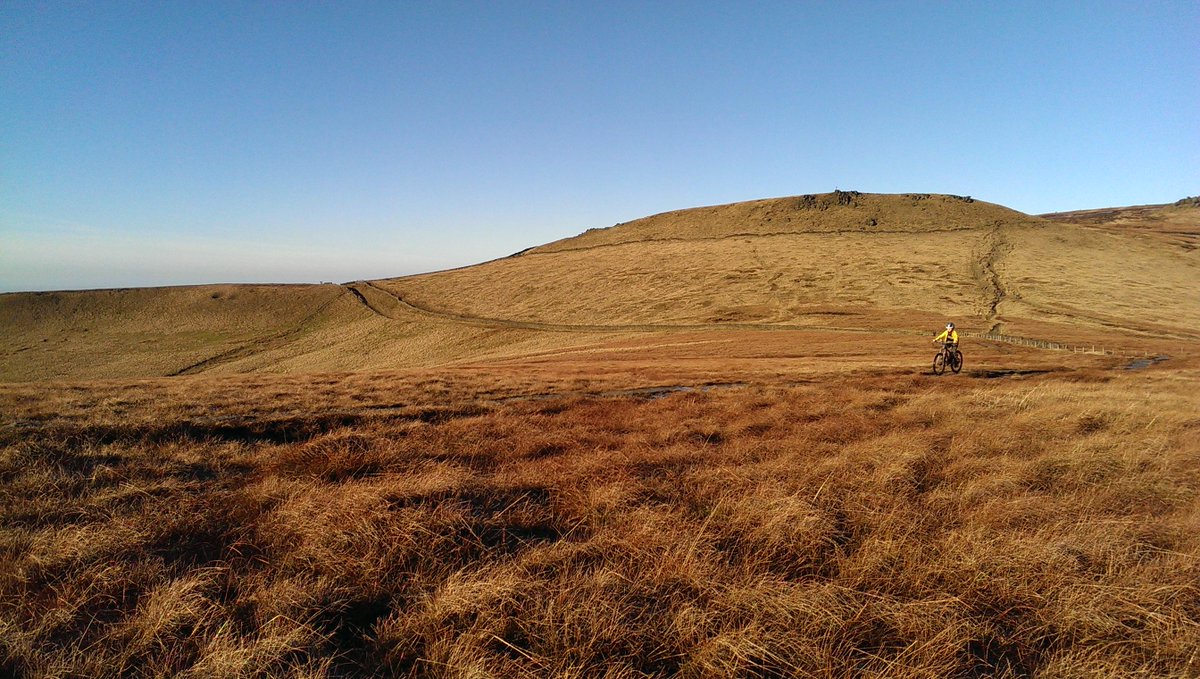 It was absolutely freezing here in Essex yesterday so only went for a quick spin to get some fresh air.
It was so cold that my leg hairs froze!

One of those night rides when your soul is shovelled full of good things by a big moon.

Rode up the Liddington Hill Fort on the singlespeed where I took the picture. It does not do justice to the moon at all, next time the tripod is coming with. Then along the Ridgeway to Barbury Castle Hill Fort where I shared the view with a lone hippy, his van and his trance music. Then a high speed thrash back home round a lake with surreal views of a disused diving board lit up by reflected moonlight. So good I want to get back out and do it again.