One night on a hill in dorset, next night in a b&b. Bikepacking - it's a balancing act. http://www.farawayvisions.com/bikepacki ... -ridgeway/

Making a cuppa while waiting for a train

Four days in the Yorkshire dales for me and hux last week. We decided to ride the 300k route that was raced the weekend before. It was bloody hard going if anyone is thinking of riding it! We had three of the hotest days this year and it was ridiculous! It almost verged on dangerous due to the lack of water supplies, we drank no where near enough water. We also camped through the worst thunderstorm Iv ever experienced. The ride on the whole despite the conditions was vaguely exciting, the scenery in the dales is great and ul ride some fantastic trails out there. Be prepared to climb alot though.

One night in my hammock 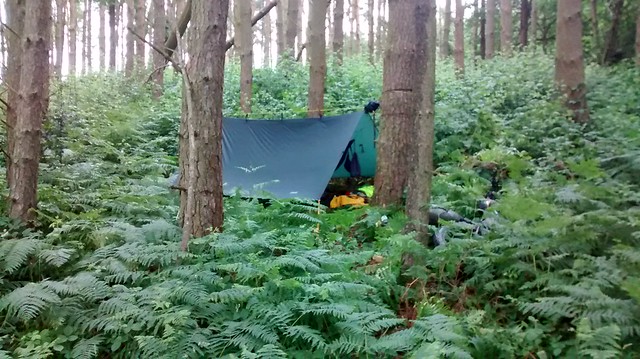 here's the bridle path that leads to the woods. 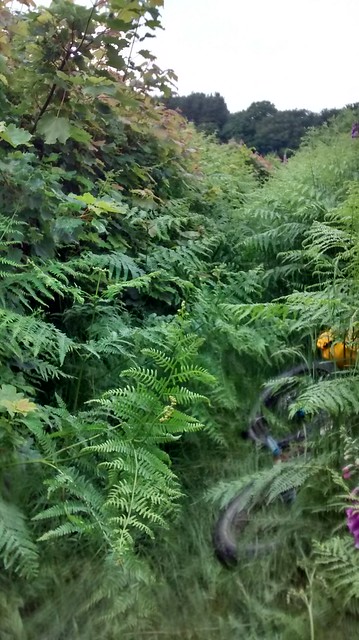 Believe it or not, there is quite a good path through this lot and I was able to ride most of it, but brambles whipping across my face at eye level was not nice.

One night at Nant Rhys bothy. No photo of this one. A couple of guys turned up after I'd gone to bed. (it was still daylight) I could tell they were trying to be quiet as they set up, but I got my own back the next morning at 5:30 by trying to be quiet too. The noise of a zip seems deafening at that time of day, but I did my best.
Konia kują, żaba noge podstawia...
Top

A little trip over to Brittany with the pretext of checking out the TDF has brought my Bivvy a month 2015 up to date... 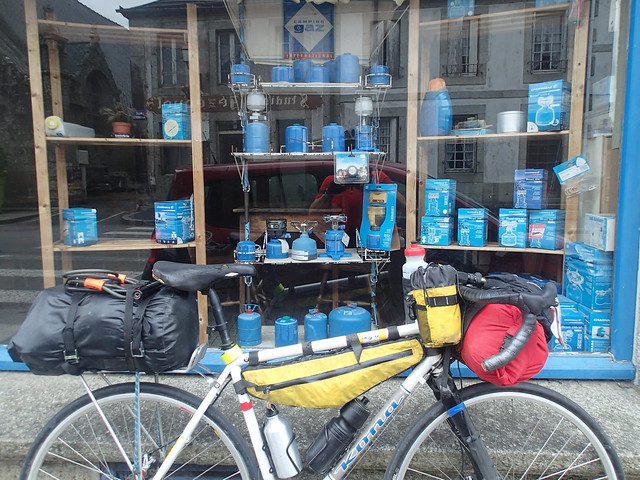 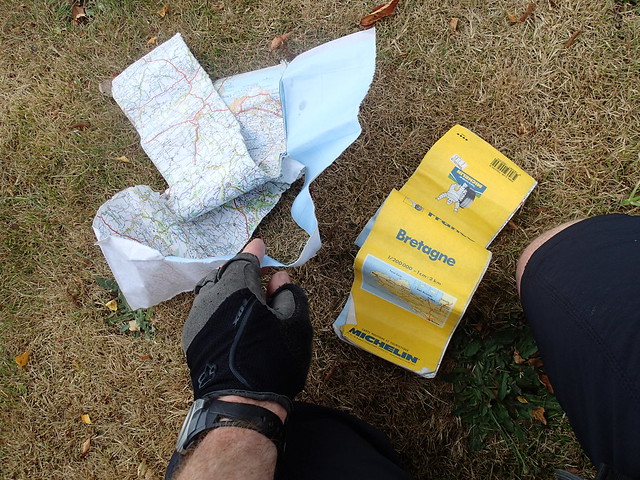 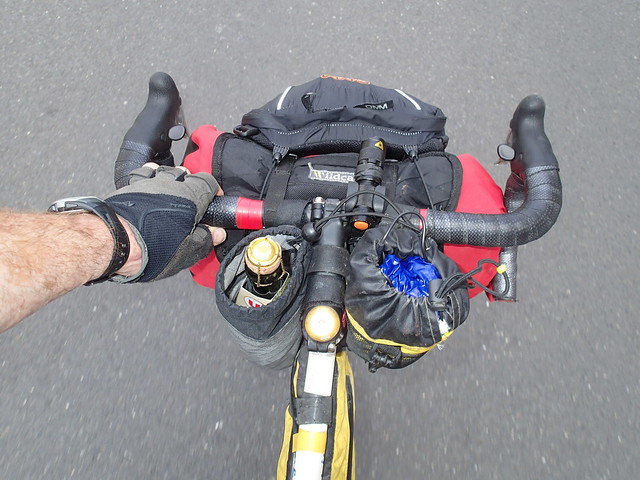 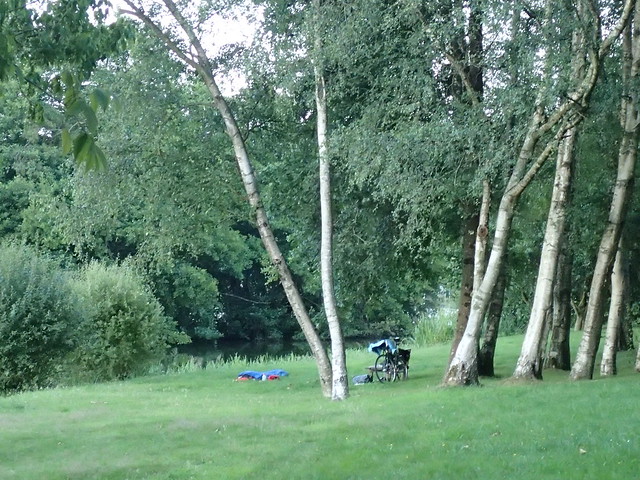 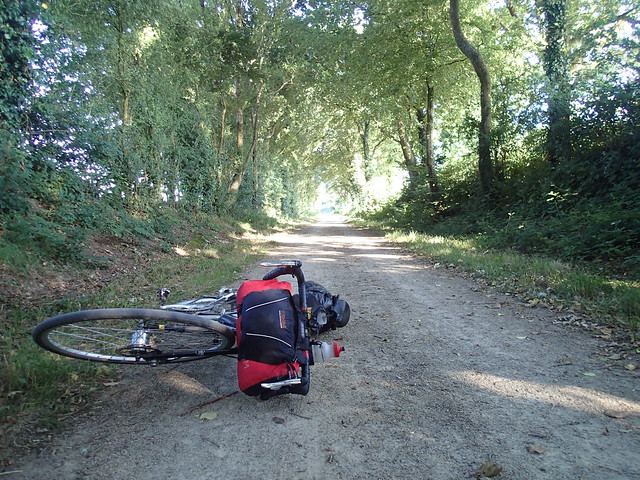 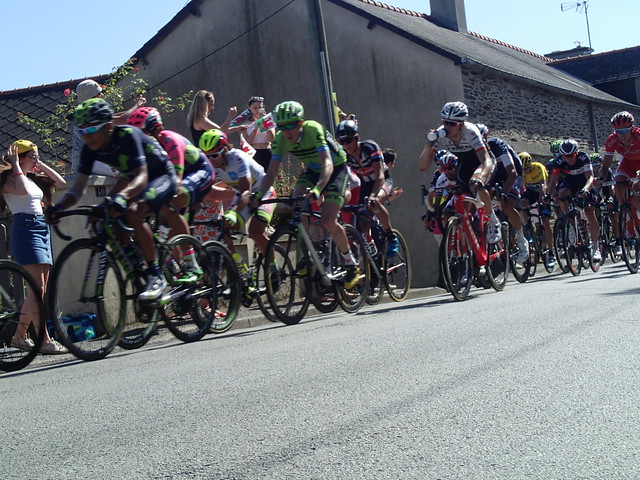 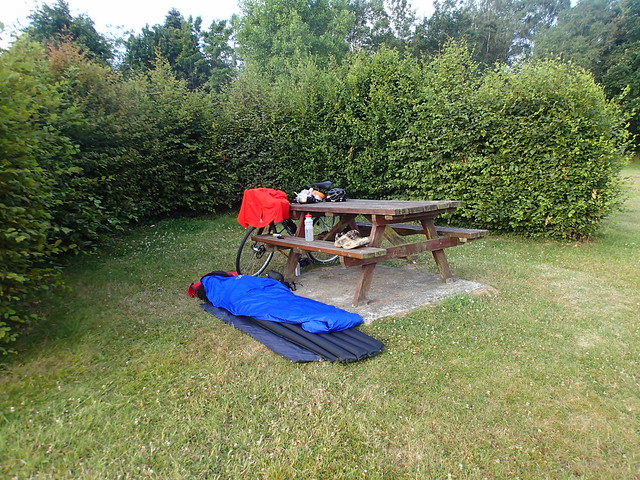 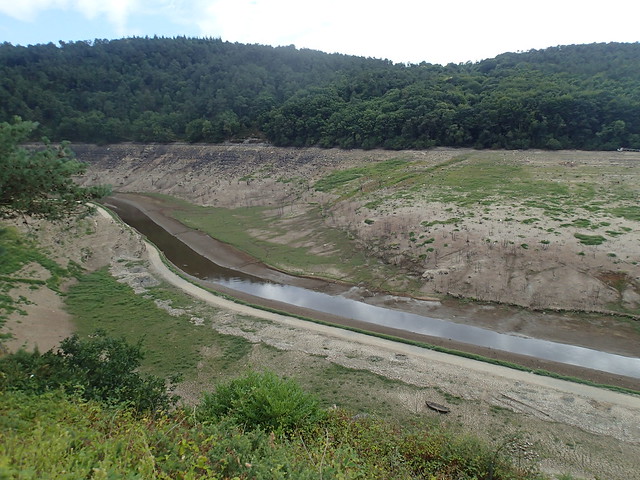 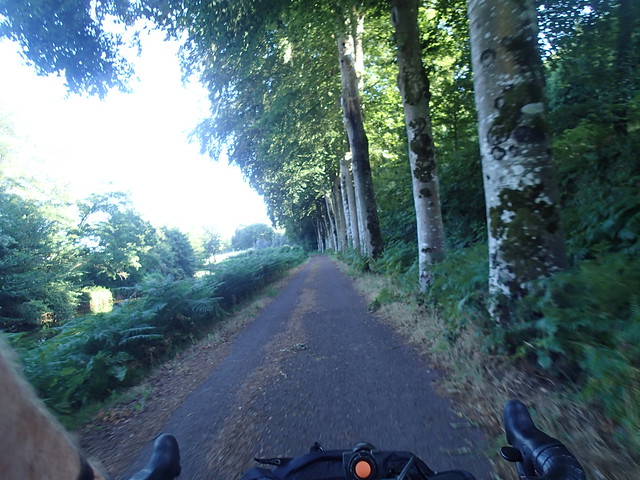 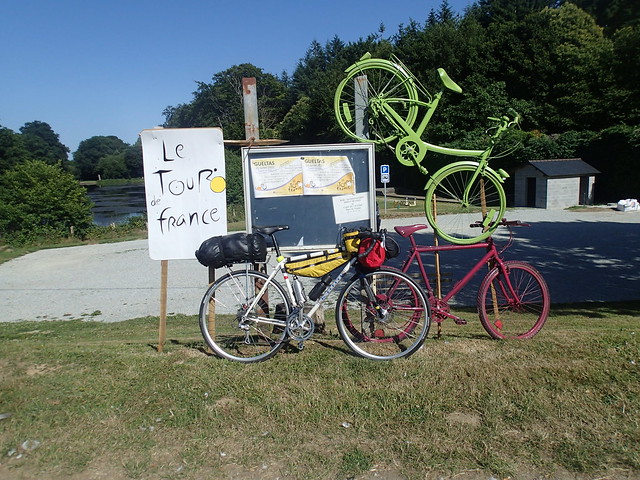 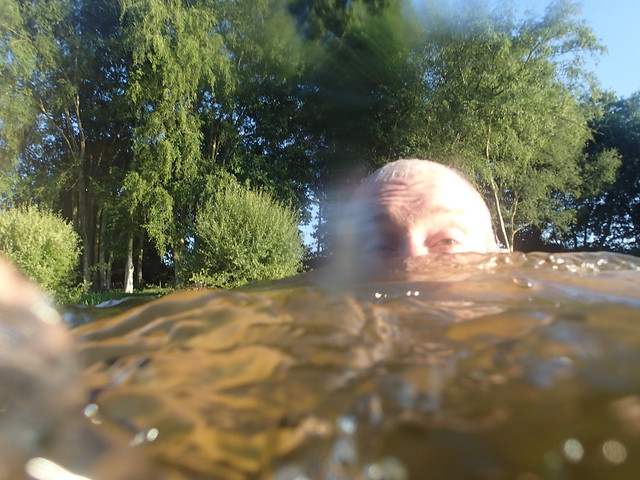 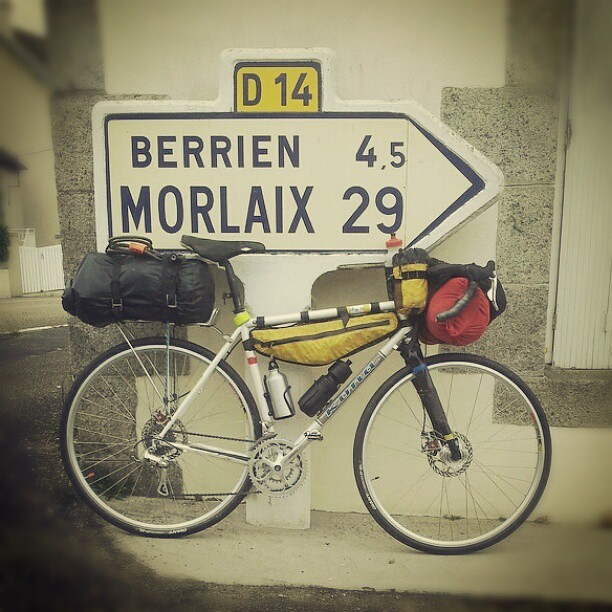 Overnighter on the Moray coast

7/7: Just ticked off July with a couple of days in the Brecon Beacons.

I was planning to follow a 110-odd mile loop I found on here that I think Ian B put together. It didn't quite happen because my freehub packed in just after lunch on day one and then my new brakepads immediately parted company from the backing plate. Brilliant. Luckily the very helpful chaps at the bike shop in Abergavenny sorted me out so we got two good days riding in anyway, just not quite what I'd planned.

Riding the Gap on a rigid bike was a very different experience to my previous full-sus-equipped encounters and I have to say I enjoyed it much more than previously.

My new Silwing and UK Hammocks quilt both got a thorough testing and performed brilliantly. All in all, a great weekend.

7/7 - feels good to be back on the beastie. Gentle 45-ish miles and 3870' of climb.
An early start this morning meant I missed the rain packing up but copped it fully from Ratlinghope all the way back into town.

late_pitch.jpg
Dallying about @ home meant a late arrival and pitch in the dark.
(74 KiB) Downloaded 4215 times

7/7 with a last minute entry

No real plan so just headed out with an idea of stringing a few trails together and seeing where I ended up. The nights are starting to draw in now and so I didnt get as far as hoped, but it wasnt the worst place to stop. Everything setup and you start to hear music, thinking great an all night rave.........listen a bit more and its a brass band and to finish off they played 'I want to break free' by Queen, which amused me greatly and ended the day on a high. 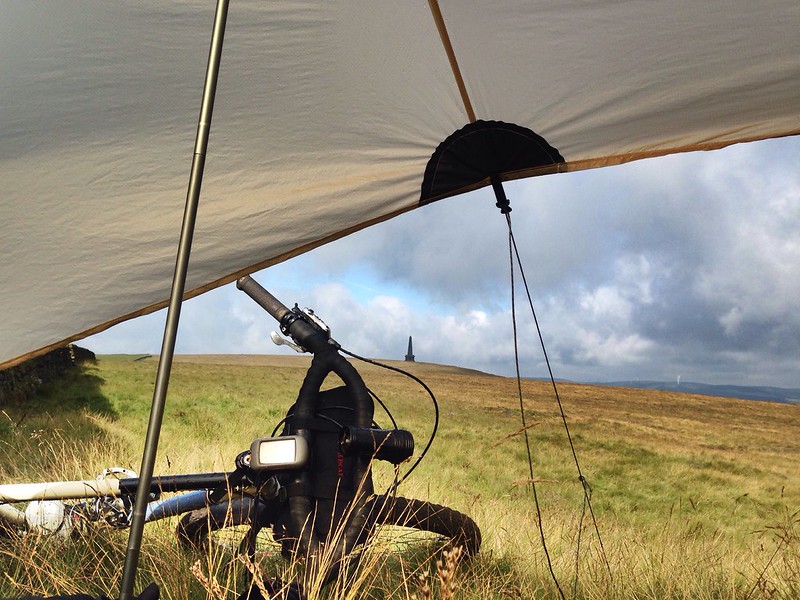 In the morning it was a case of going left or right?
Ended up riding some pieces of trails I havent been on for years. From the forecast I knew i'd be fine until noon before the showers came. Up on a ridgeway you could see it coming and knowing theres no shelter nearby (and i'd left my jacket at home) it was time to roll the dice on a footpath which seemed to lead to the pub. Another gem found and in the pub minutes before the rain arrived (some others werent as lucky)

I kinda knew the way home, but there were a few new trails to add in and a nice traverse across the moor and a break in the drizzle 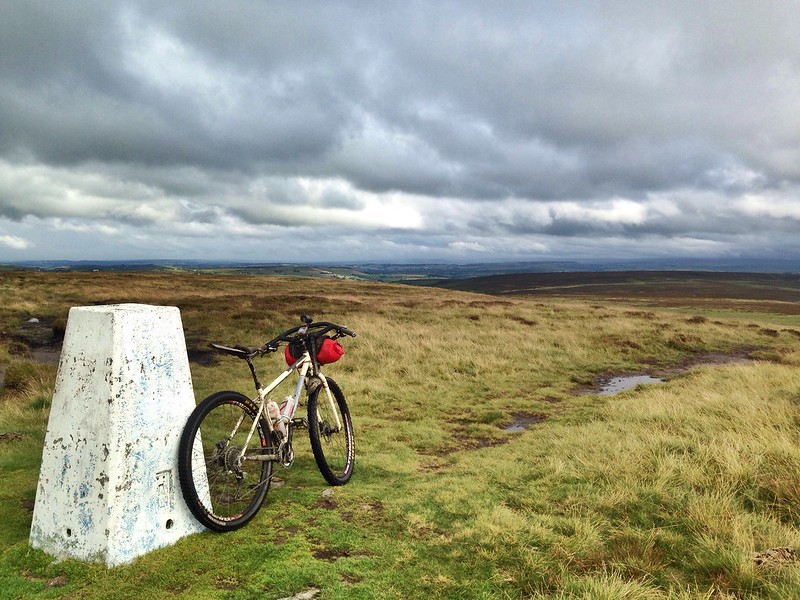 Some others werent as happy 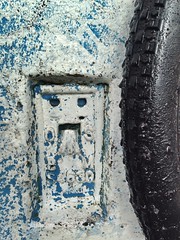 Linking up new trails I also discovered this years Yorkshire National Tussock racing venue. Regulation height and 7-8 on the bog rating. Should set me up nicely for the Worlds in September. 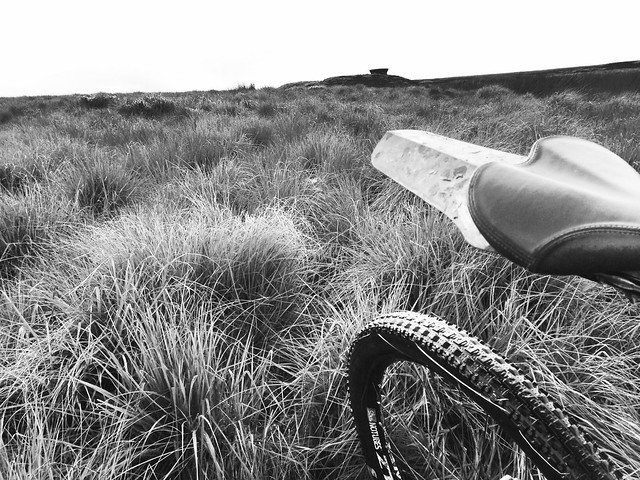 7/7
A steady ride from near the seaside over to BB towers for a brew and piss take then up to Glaslyn for a breezy night with Tiger, wedged between a tarp and a fence.
Back down for breakfast in Mach'.
I've only got a crap pick in the dark of our mansion for the night.
Top

No Urban Foxes though

I've only got a crap pick in the dark of our mansion for the night. 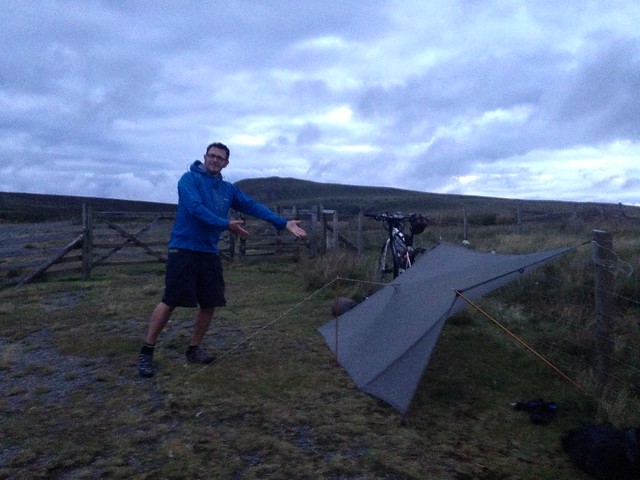 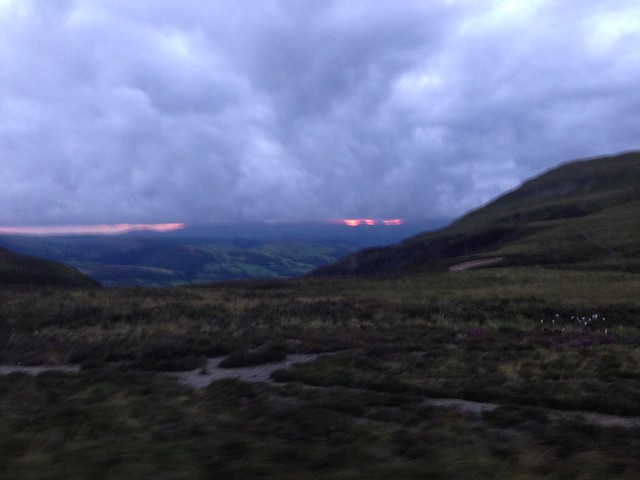 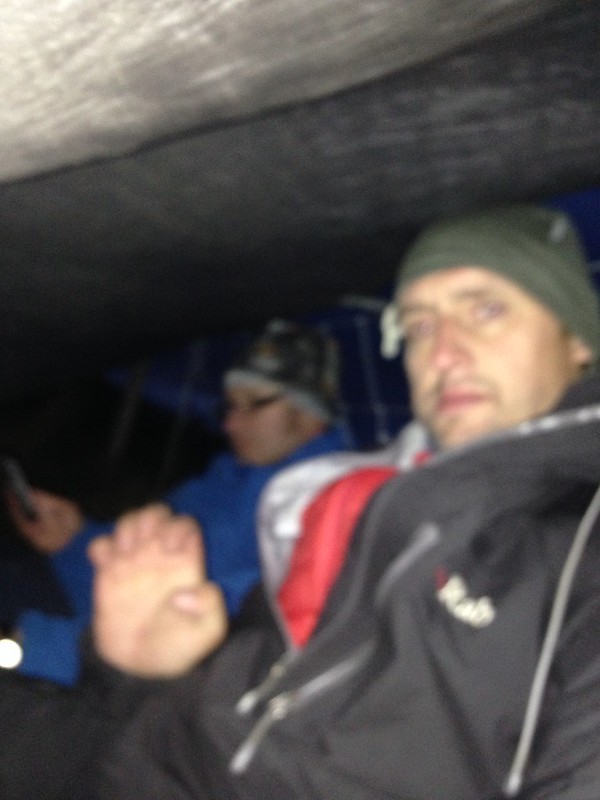 8/8...August ticked off. Late night ride up to Stiperstones...people just down below me having fun so I pitched in the dark...big mistake. Pitched on a slope and kept sliding back into the rear pole of the tent. 5 hrs sleep, broke camp, snapped a snap and got outta there before the walkers started arriving.

Could've sworn I heard a bike around 00:40-ish...but I might have been trippin' too.

Had a nice little trip to welshest wales. I did consider having a ride of the TCW but time scales and the desire for a nice relaxing ride ruled it out really.

Drove to Mach and got the train to knighton. Finally got going about 3:30. Following the TCW, more or less, to rhayader. Then turned off to head up into elan, nice climb up the 4x4 track and a lovely bivi near the top.

In the morning the weather had turned, and within a few meters I heard the disappointing ping of a broken spoke. Regardless. nice roll over elan and then a quality bit of tussocking over craig y lluest inclusive of a thigh deep bog

Limiting the off road a bit due the borked spoke I meandered back towards Mach via hafren, a few national cycle ways and a nice descent off the last hill.

Bivvyed by the canal north of Tamworth whilst cycling from Leeds to Malvern at the start of August.

Also two nights this weekend whilst hiking on the SW coast path in Dorset blog here if you are interested. Turned my phone off for the weekend so didn't take any photos.

Bivvy a month does allow tents

Bivvy a month does allow tents

Oh...well that makes it easy. Although you'll have to take my word for being 7/8 as it appears I didn't take any 'tent photos' during July!

Farawayvisions wrote:One night on a hill in dorset, next night in a b&b. Bikepacking - it's a balancing act. http://www.farawayvisions.com/bikepacki ... -ridgeway/

Just got around to reading this and the other Ridgeway post, an extended Ridgeway is definitely on my 'to ride list'.

However Farawayvisions you do know there isn't a railway station at Lyme Regis?
Top

there's one in Axminster though
Top

True. I'd forgotten that.
Top

Farawayvisions wrote:One night on a hill in dorset, next night in a b&b. Bikepacking - it's a balancing act. http://www.farawayvisions.com/bikepacki ... -ridgeway/

Just got around to reading this and the other Ridgeway post, an extended Ridgeway is definitely on my 'to ride list'.

However Farawayvisions you do know there isn't a railway station at Lyme Regis?

Yip, as Mpolo said, there's one in Axminster. and that's only a few miles away.
http://farawayvisions.com
Top

Has been a bad year and think I am 5/8 so far. In July I rode from London to Market Harborough bivvying just outside Harlesden in some woods. Was supposed to ride home but felt so tired on the flat rail trail between Northampton and Mkt Harborough I got the train home.

Last week I headed over to Europe to watch the Paris-Brest-Paris 1,200km brevet ride and then headed to Belgium and back to Dunkerque. 4 nights out in total in various woods but I did sleep in a WW1 graveyard on the last night.

Serre Road No 2 cemetery. (Not the one I stayed in)

Last night we made it to the long mynd for a quick one. And what a great one it was too! 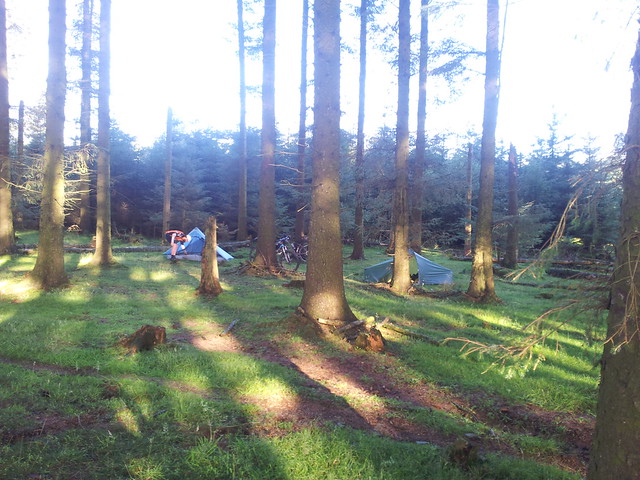 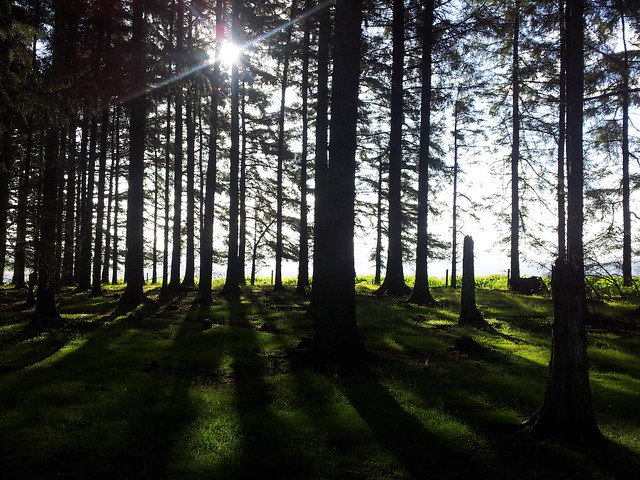 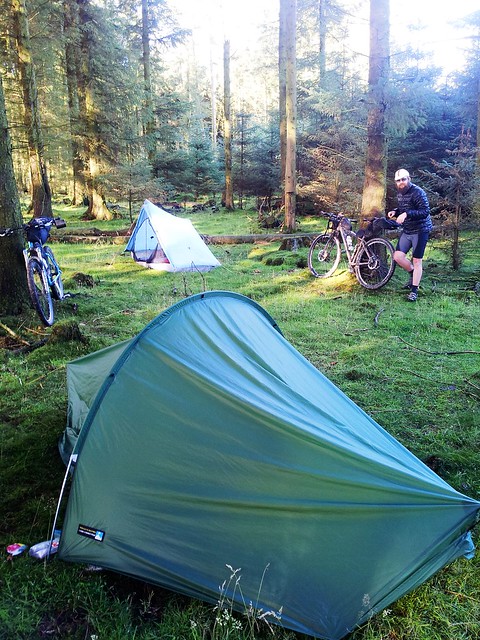 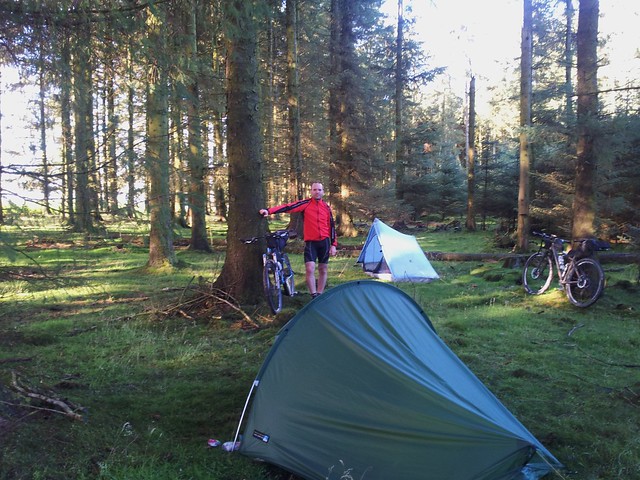 The Ragleth in Little Stretton was besieged by the Mercia Fell Runners group who had just given Callows a good thrashing. A night of chatter and beer ensued. Made it to the bivvy spot close to midnight.

10-ish mile ride out from home. Puncture on the way. Fat bike tyres take some inflating with a little pump, I found out. arrived just before dusk.
I'd thought thiswould be a good hammocking spot when I first came past here last winter. Well-spaced trees with no undergrowth and a little stream for water. Unfortunately that was winter. Now, it's a midge-infested nettle jungle. My preferred spot to hang the hammock was unusable because the trees were to fat for my straps. I had to tread a space in the nettle field. Not nice wearing shorts. To make things worse, I'd forgotten the Smidge and the midges made the most of the opportunity. 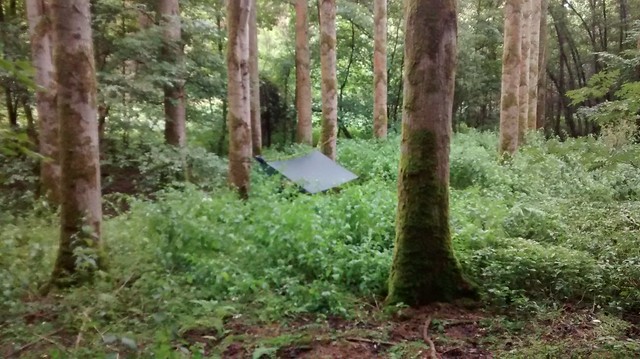 After a cup of tea and a biccy, bed. The owls were having a concert and I had a little fun hooting at them. It seemed to draw them in because after only a few (my) hoots there seemed to be 4 of them in the trees above my pitch, screeching away. Eventually I managed to drop off then woke to find that the pegs holding the tarp guys had pulled out and I was getting rained on. I got as far as unzipping my sleeping bag and putting one leg out when I realised I'd been dreaming and my tarp was just fine. A cruel trick that, I think. Didn't sleep very well because of the rain drumming on the tarp all night and the sound of the stream, which I couldn't hear before I got into bed. 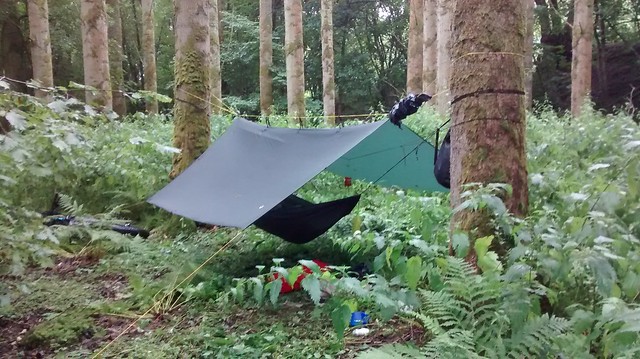 In the morning I found I'd forgotten to bring a spoon to eat my breakfast muesli and had to suck it out of the side of the bowl. Still, that's not as bad as forgetting the milk and having to eat muesli made with just water.

Life got in the way and I missed August.

A weekend at SSUK in Yorkshire may have to count for September, as there's plenty of life queuing up to get in the way this month too.
Top
Post Reply
282 posts