it's not that I can and others can't, it's that I will and others won't.
Top

Excellent write up, sounds like a right proper adventure for you all

Second bivy this month saw me ione and scott heading for a night on the long mynd. We drove over to church Stretton and rode over the tops to meet Scott at bridges for a few beers then climbed back up the portway n down into little Stretton for dinner and more beer, coffee n coke before climbing up into the woods for the night. Here's some pics
Top

4/4. After a nice ride in the sun from Shrewsbury out to Bridges, I caught up with Mike and AW for an afternoon of Long Mynd fun, followed up with a nice meal and a climb up into the forest for a night out. Back down into town in the morning for brekky at a cafe and a ride home.

Great to see Mike and AW again...always good fun to roll with.

April Bivy ticked. from work to the Anglers Rest in Bamford where 18 bikes and Intrepid brewing were launching their collaborative beer (its 18th batch from Intrepid) I sampled some and can approve it for public consumption, excellent pies are available too!

As an aside, the Anglers is a community owned and run pub, post office and cafe. it has new, and excellent, bike facilities. racks, locks you can use for a returnable deposit, tools, pump and work stand, and if you go there this Saturday by bike you can have some FREE BEER!

anyway, after several beers I cruised over to burbage valley and had a very pleasant night sleep among the boulders under burbage south. Beautiful clear sky and fairly warm, the sun in the morning was really quite hot. Trundled down the road to work and shower, porridge and coffee.

I posted an April bivvy earlier but that was a walk-in. I was feeling that it didn't really count as there was no bike involved, so I packed my bike and pedalled out to Erddig park to camp on the motte & bailey. This is a very pretty spot at the moment with carpets of primroses between the trees. 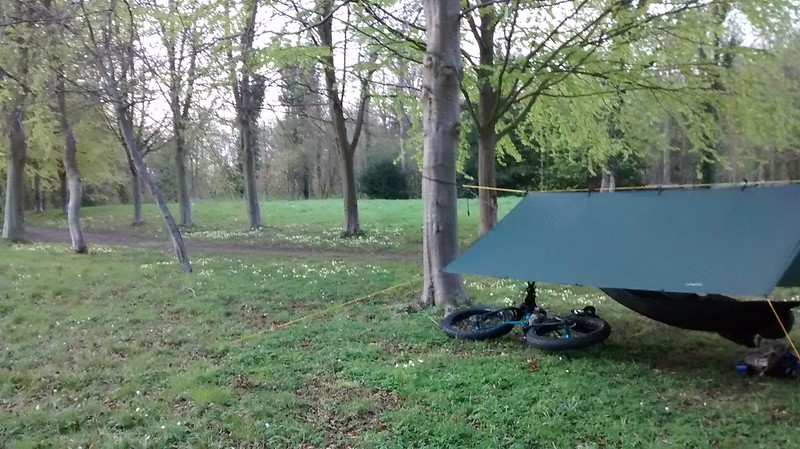 I was just finishing setting up when I heard the sound of youths on the track; you know the kind of thing, shouting, swearing and that braying laughter that's particularly annoying. But then they passed and I breathed a sigh of relief. It was too good to be true, though, because ten minutes later, there they were in all their horrible reality - four lads and a couple or three girls. They parked themselves a good distance away from me but the noise was still considerable. Even worse, one was talking (shouting) on his mobile to another, giving directions.

"Oh No", I thought, but sure enough, within half an hour, another three appeared.

Needless to say, I didn't get much sleep, what with the braying and squealing (the girls), the marauding in search of firewood, then chopping and breaking of branches. The noise went on until daybreak.

Morning view from my hammock. You can see the pretty primroses and THEM in the distance. 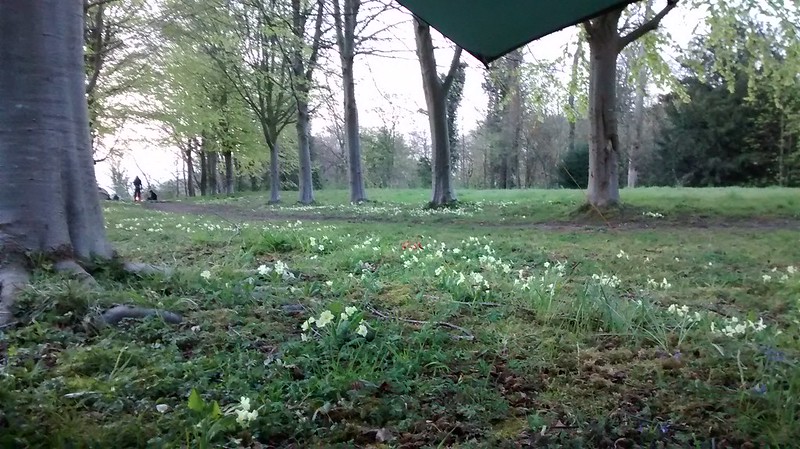 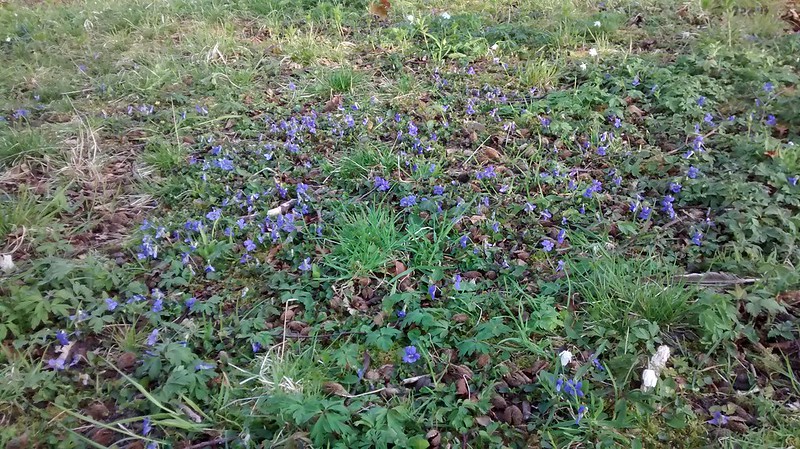 In the morning, after I'd packed up, I went over to have a look what kind of mess they'd made. It was as you can imagine. They'd lit two fires. They had chopped down some trees that were still burning with one end in the fire and the rest of the tree lying ready to be pushed in when the end had burned away. There were empty cans strewn within a ten metre radius. How predictable. Some of them had gone home but there was one girl and four lads left, looking the worse for wear. I begged them to clear up after themselves, this being such a pretty place and they said that they would. Yeah, right! I did think of 'phoning the park ranger to let him know, but somehow thought I'd give them the benefit of the doubt.

Last shot of Erddig Hall on the way home. 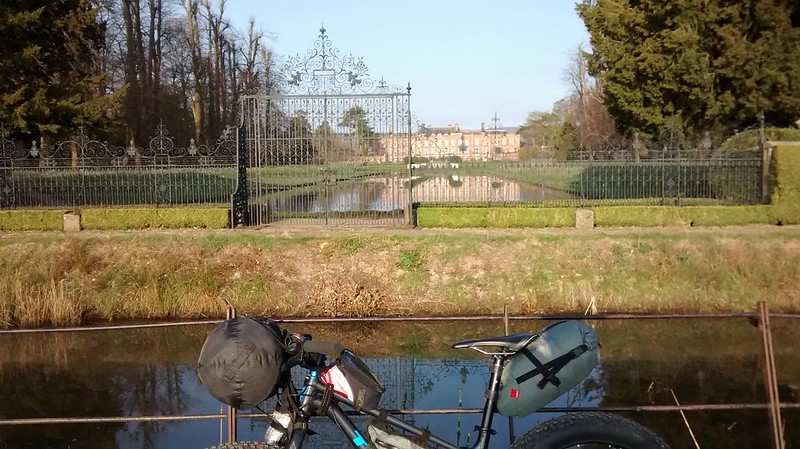 Leaving it late.
Used my hammock for the first time in about a year. Very comfortable it was too.
4/4
40/40

Leaving it late.
Used my hammock for the first time in about a year. Very comfortable it was too.
4/4
40/40

Didn't get any but I had jBay along to verify it as an independent witness.

I can confirm Taylor was in a flappy Hammock last night.
Avoided the rain by an early start.
Top

Quick ride over to Minch Moor Bothy while i was with a group of other riders in Peebles. Big thanks to Ray for the routes, just wish i'd asked about a source of water near the bothy before!
Looked for Alistair's recommendation of a gate at the bottom of the deliverance descent, but i think my eye balls were still rattling round too much in their sockets to pick that one up!

The final descent back down into Gypsy Glen & Peebles is ace

Was a great area to ride which i'd like to return to sometime in the not too distant future to explore some more..
Ever Feel Like You're Being Orbited?!
Top

Glad you enjoyed it.
Top

5/5 - bivvy in Hafren forest in wind that seemed gale-force at times. Cheers to Taylor, Chew and co for an entertaining night out.

Like Scott and many others, May has been duly ticked off with a bothy Nant Syddion) and bivvy (Hafren Bogs) on the WRT with Beth. 5/5

Got a video to edit too, so will see how that goes - not even looked at the footage yet.
Waiting to see if I have a group scene of everyone's arse at the bothy as we went to bed and left camera unattended on the table downstairs...

Ah sounds like I missed two great nights. Jas/ray, is that descent in to Peebles the one off kirkhope law at the top of the cardrona forest by any chance?? The last PIC looks like the top.
Top

Ian wrote:Waiting to see if I have a group scene of everyone's arse at the bothy as we went to bed and left camera unattended on the table downstairs...

5/5 Failed to complete the Cairngorms Loop due to lovely spring weather but had a superb trip nonetheless.

On the WRT, in the forest about 2 miles short of Nant Syddion, having done about 8 miles more than I would have done had I reached my intended destination at Nant Rhys, if I hadn't been stymied by the rally in Hafren and taken a few wrong turns.

Had to set up and cook in the dark (goulash and spaghetti) because my head torch battery expired, though I do have a candle lantern which helped a bit. Had a good nights sleep then woke up to a misty morning and a good view of the windmills I'd passed under the previous night. While getting breakfast, the rain started. Always look for the positive, I say. In this case it meant that while packing my stuff away I was able to gather enough rainwater running off my tarp to fill my Camelback. 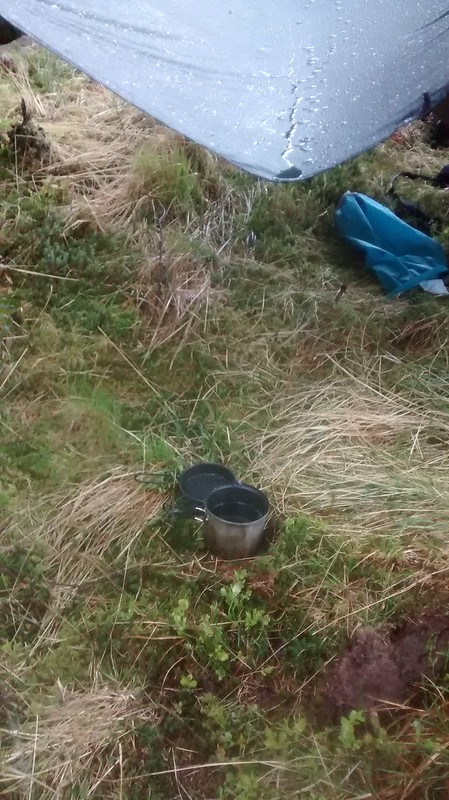 Two miles later I was at the bothy. Another mile, and I was again screwed by the rally lot, with motor bikes this time. After a bit of wandering about trying to get out of the forest I eventually told the marshals to get stuffed and forged on along my intended route to Nant Rhys. This meant I had to dodge the bikers while pushing up a horrible slippy muddy track, lifting my bike up on to the bank every few yards. At the top of said track was another marshal who informed me that the last of the riders had gone through and he was just waiting for the closing riders to open the trail again. I could have waited at the bottom and had a brew if I'd known. Hey Ho, such is life>
Konia kują, żaba noge podstawia...
Top

Mike wrote:Ah sounds like I missed two great nights. Jas/ray, is that descent in to Peebles the one off kirkhope law at the top of the cardrona forest by any chance?? The last PIC looks like the top.

Sorry Mike, only just seen this..

Yes, the last pic was taken at the top of Kirkhope Law. I think next time i'll have a look at starting the descent at either Dun bicycle or Birkscairn Hill..
Ever Feel Like You're Being Orbited?!
Top

No worries jase, I came across this a few yrs ago by coincidence and iv always wanted to do it again. Its vaguely exciting and the end is great when it turns to single track if I remember right

Fancy thrashing that susser around afan trails end of the month couple of us r heading down to camp at the pools and ride the afan trails 29-31?
Top

Mike wrote:No worries jase, I came across this a few yrs ago by coincidence and iv always wanted to do it again. Its vaguely exciting and the end is great when it turns to single track if I remember right

Fancy thrashing that susser around afan trails end of the month couple of us r heading down to camp at the pools and ride the afan trails 29-31?

Must have been great finding that descent by accident Mike!

Afan sounds good, will have a look at those dates & get back to you

No worries jase iv pre booked a pitch anyhow and Neil ( composite )has a big tent
should be a good weekend pal make a change to through the bike down some rocks!
Top

Sounds like a plan Mike! I've gone all 'duro & have bought a dropper post. Couldn't bring myself to get any goggles yet though!!

Pm me ur mobile number pal, ill text u details etc. Wouldnt want to put out some enduro vibes on a bikepacking forum now. might mess with the karma

come on stu , u know u may as well get a full susser also!
Top
Post Reply
282 posts