This has its genesis in two threads - Shaf's North Peak 100 and Craig's Strictly local threads.

When Shaf posted up his NP100 I thought it was a good idea and worked out a local loop in the southern Dales of similar length but it didn't really feel consistent and then the second lockdown started so it got shelved.

Craig's "Strictly Local" ride around the city limits of Aberdeen was interesting. Locally the boundaries of North Yorkshire would be way too big to fit within the current guidelines. Our local authority area, Craven, would also have a large boundary, not really doable in a day. As a "rural" sort of chap, human imposed boundaries didn't really sit well with me, a more natural solution would be better.

A short ride last weekend gave the solution: the watershed of the upper River Aire. A bit of searching came up with this: https://environment.data.gov.uk/catchme ... hment/3484, pull the bottom end up to Steeton/Silsden to avoid Keighley (if you've been there, you'll understand), onto bikehike and plot a route that follows the watershed as closely on legal RoWs as possible and I ended up with around 108km. Mostly road and stone track there were just a few potentially boggy sections. Very little technical terrain - the descent of Stockdale Lane being the hardest.

With fine weather forecast I decided to head out yesterday for a "midweek" hit. I rolled down to the "start" at Steeton & Silsden railway station but since I met the route a little before that and hit the lap button at that point. The roundabout by the station was thankfully quiet and into Silsden before the long drag up and over to Draughton. Draughton's phone box is one of those that have been repurposed, in this case as a book club, it made national headlines a few years ago when it was vandalised. 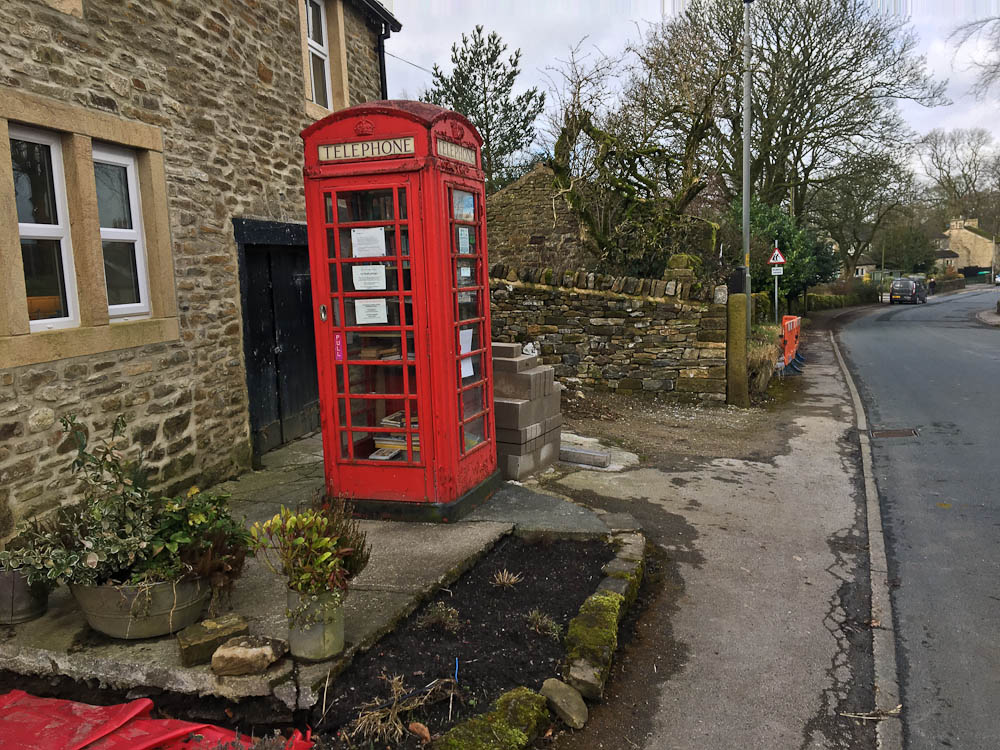 Down to the A59, crossing this can also be worrying as it's a fast road with an overtaking lane at this point, then into Halton East which according to my unofficial schedule was to be my first hour point but I was ahead of that. The first off-road section will be familiar to those who've done the YD300 & YD200 routes as it's the last downhill section. A bit harder going uphill! The gate marks my hour point. The next section leading up to the road is the first boggy section but I'm in luck - the farmer has filled in all the deep puddles and it's pleasantly straightforward. 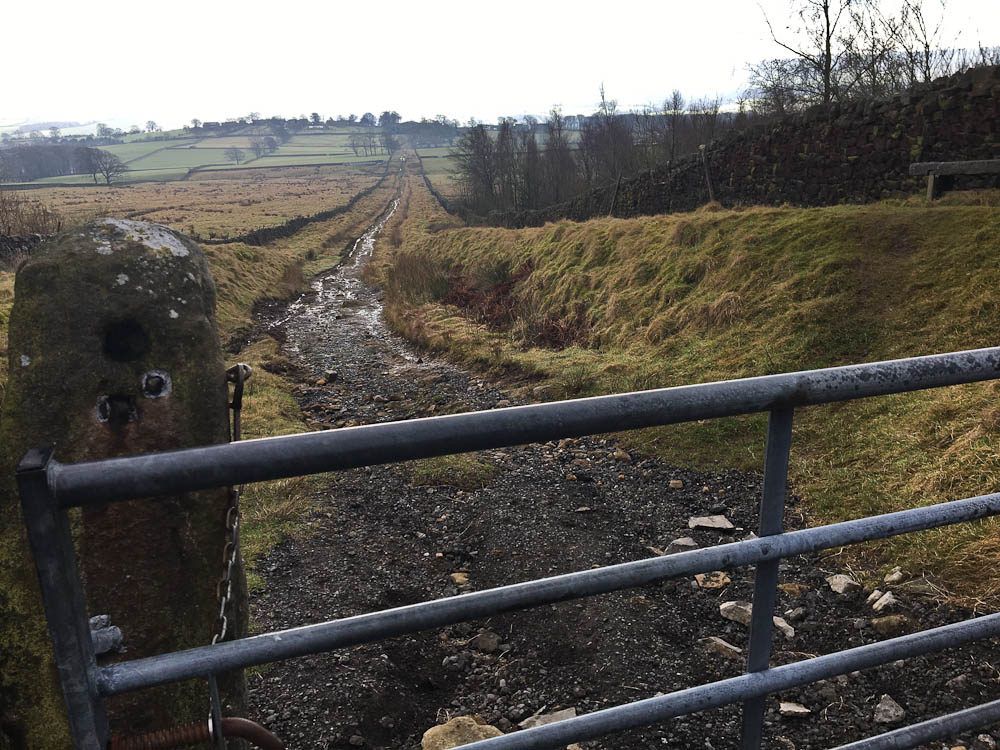 Not so pleasant is the strong wind that greets me when I get to the road, it turns out I'll be riding straight into this for the next three hours or so. The climb up and over Barden Moor is taken steadily, no need to burn matches at this point. Two weeks ago much of this track was sheet ice, today it's just slightly damp. 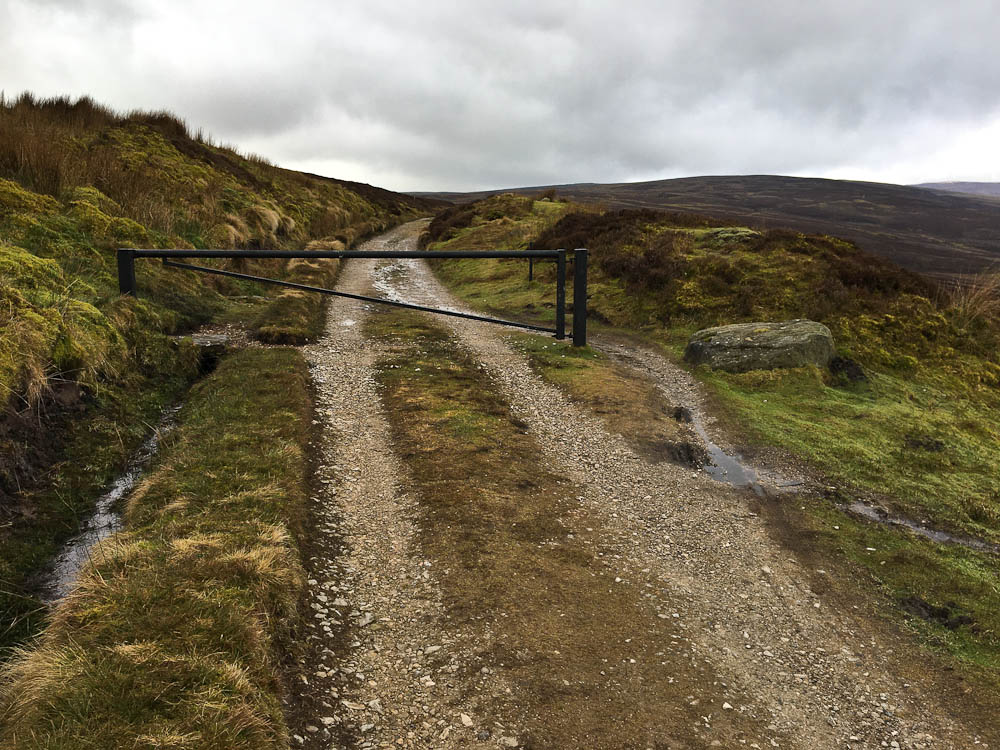 This gate was frozen in place a couple of weeks ago, the ice was about a foot deeper than the water here. 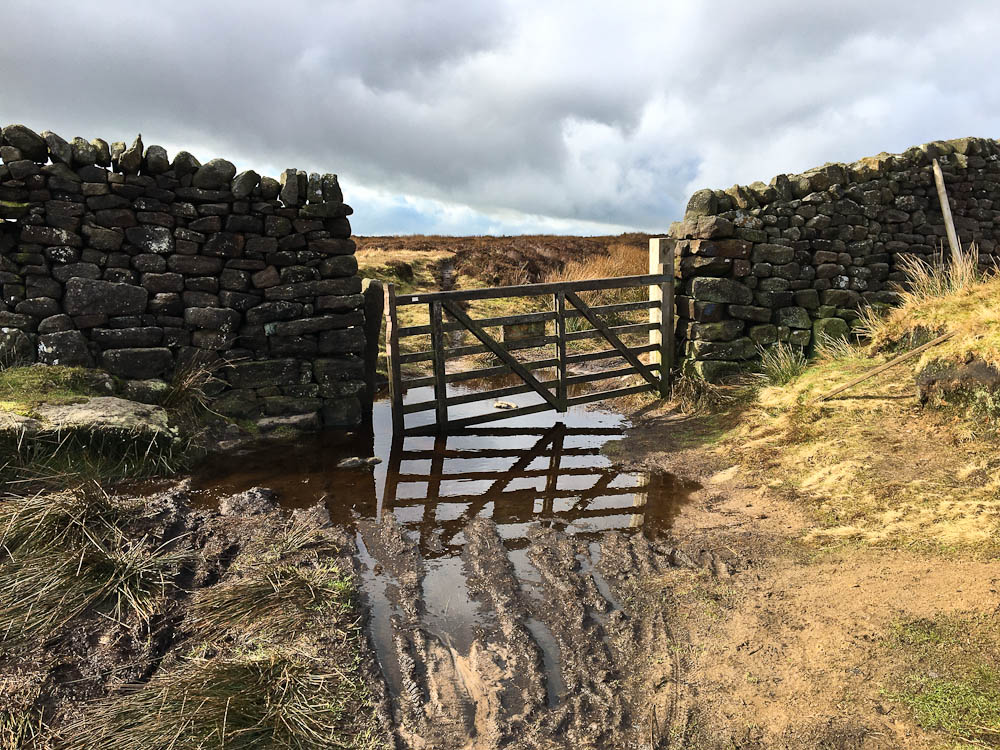 I'm still ahead of schedule at Hetton but the first "boggy" section slows me down. Normally it's rideable but I have to walk a couple of hundred metres due to the mud caused by the farmer out feeding stock, just no traction so I'd end up spinning comically at a standstill. The subsequent rocky track is fine as is Boss Moor which isn't as damp as I expected and the bit by the old barn hasn't been churned up too much by the cattle so is rideable.

Once I'm onto Mastiles Lane the going becomes firmer but the wind is pushing me back, slight downhills where you'd normally feather your brakes need hard pedalling. My third hour mark comes and goes but I'm now well "behind" schedule, the last big climb for a good while leads to the top of Stockdale Lane.

I'm actually a bit cold by now - the temperature is nowhere near the forecast 10/11C and the wind is making that feel even cooler. My level of output is just enough to stave things off. As soon as I turn east at the foot of Stockdale Lane the effective temperature soars and I begin to warm. The next bit is one of those RoW anomalies - the BW just stops in the middle of nowhere. There are plans to link everything up and local riders have used it for years, the last time I rode it I met the farmers and had no hassle so I've no problem in including it.

Back on the road at Otterburn it's easy going to Coniston Cold and the second crossing of the A65, again relatively quiet. I'm riding through the next set of fields when there's a regular ticking from my back wheel, the rear brake has worn through, I'll fix it when I get to the next road. Unfortunately I don't have the right sized hex bit to undo the retaining bolt so I'll have to do the rest of the route with just the front brake, luckily there's only one steep descent remaining to deal with.

Another stoney track leads across to the the A59 (again) but no need to cross it as I drop down to the Leeds Liverpool canal and pass under it. The canal is followed, muddily, as far as the Pennine Bridleway in Barnoldswick then it's the next big climb up Weets. Six hours ticks by as I start the climb, my unofficial schedule had me at the top by now. The climb is steepest at the start but then just seems to drag on and on. The last section to the next road is the last of the boggy bits, my rear wheel grinding at the brake pads that aren't there. 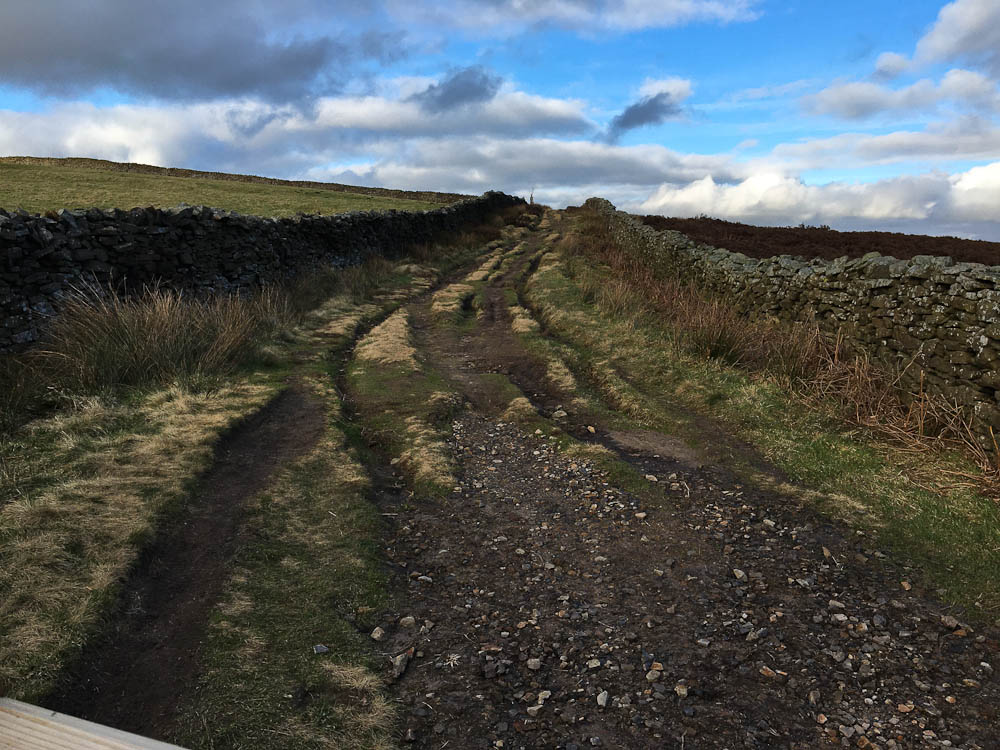 From here to the end is nearly all road but I'm debating whether to modify the route slightly and just follow the main road for a bit rather than a long climb on a minor road. In the end I decide to stick to the planned route. After Foulridge there's a ford to negotiate, well I say ford, it's more like the road follows a river bed for 200 metres, it's possibly the longest ford in Britain!

The ford ends just by the trees! 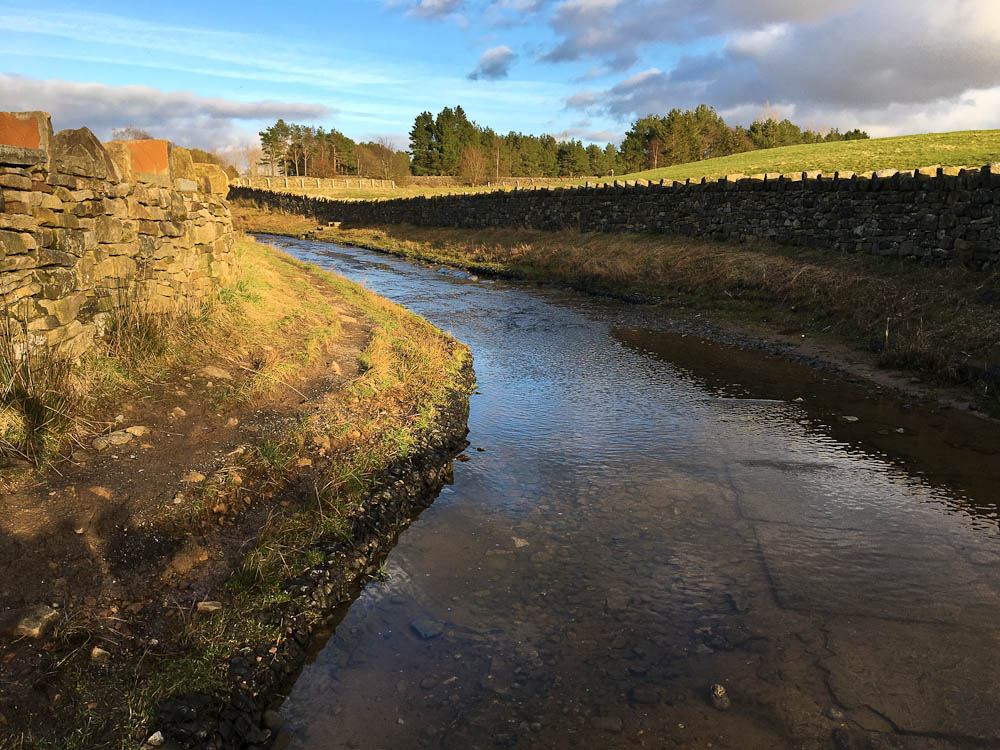 The last section - I've only ridden some of this in the opposite direction so make one or two minor nav mistakes but then it's one of the very few bits of the route I'd not ridden before and it becomes really steep! Fortunately it soon eases off and after a couple of small fords it's a steady climb up the other side. 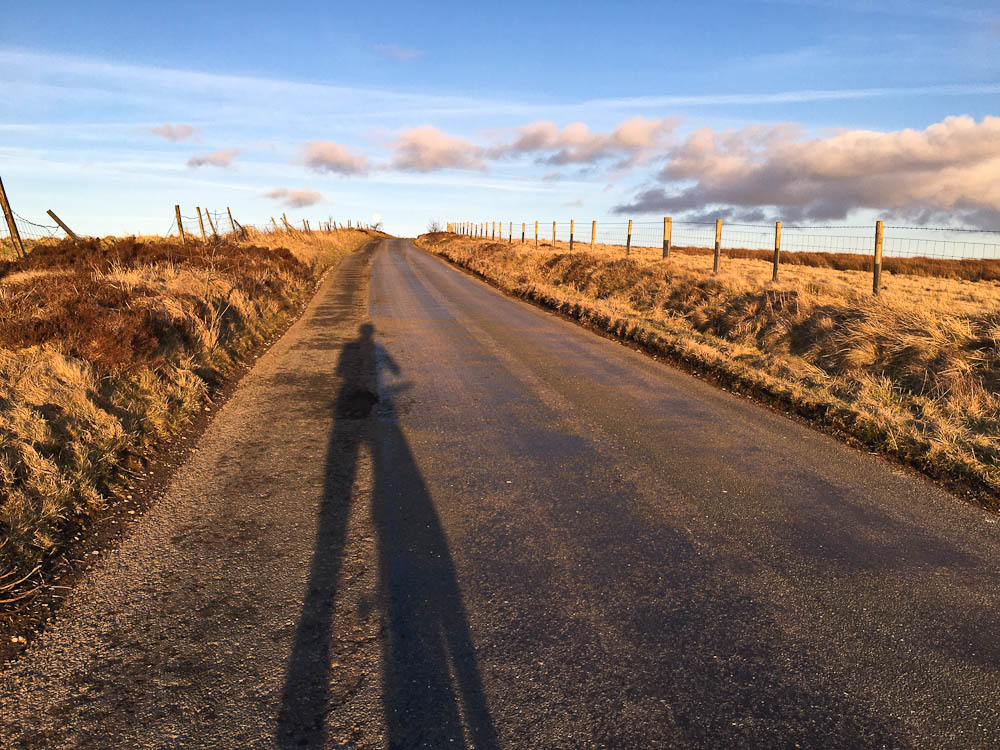 Eight hours sees me at Keighley Tarn, it's nearly all downhill from here, just one off-road section to finish things. The light is going and with it the heat and I'm getting properly cold, no heat being generated. I turn off for the final bridleway and it's an uphill I've forgotten about. The true last descent appears and sunglasses are inappropriate in the gloom under the trees. The road leading down to my finish is really rough as it's made up of sleeper sized lumps of stone.

I debouch onto the main road next to the chippy along with a socially distanced queue. I hit the lap button 8hrs18mins. I ring Cath, turn on lights and head (uphill) back home.

So there you have it: The Aire Watershed, 110km with 2400m ascent. I was on a rigid 29er but given the road-track-field distribution it should be perfectly fine on a CX/gravel style bike. If you fancy doing it drop me a PM with your email address and I'll send you the GPX.
Better weight than wisdom, a traveller cannot carry
Top

Looks a good day out Bob. I'm speculating on a YD holiday at some point this year (ever the optimist!) so may well borrow some of that route
http://philsbikepacking.blogspot.co.uk/
Top

I like that Bob, I'll drop you an email and add it to my list. Can you gauarentee the weather will be nice?

and I right in syaing it would be suitable for the 32mm gravel bike... looking forward it. The ford seems a bit worrying, is it gonna end up in totally soggy/cold feet or can that upper banking section all be walked (and a dry way to get across the ford at the end of the 200m)...
https://quran.com/
Why/how HW fuel muslim hatred https://youtu.be/F64HcgDqttA
What's really happening to Uighers https://youtu.be/dgipkT-IMT0
Top

Phil, you've probably done all of the bits in the Dales, most of it is either on or close to the YD300 or one of the YD200 routes.

Sean - this is Yorkshire!

Shaf - It would be fine for a gravel bike, there were quite a few skinny tyre tracks in the mud yesterday. Some bits will be bumpy of course. The ford is OK, it doesn't come to BB height/depth. There's a couple of different surfaces under water, the "good" looking flat stones are actually the worse option as they are somewhat greasy, the gravel surface is better to ride on. There's a path on the side, it's used by folk out walking. Even if you did get wet feet, it's only another hour or so of riding to the (nominal) end. The ford is here http://streetmap.co.uk/map.srf?X=390729 ... &A=Y&Z=115 and is all of the straight section of lane plus the bend at the RH end. Here it is on Google Maps - https://www.google.co.uk/maps/@53.87166 ... a=!3m1!1e3

I reckon it would also be fine done single speed, I've done quite a bit of it SS.
Better weight than wisdom, a traveller cannot carry
Top

Sounds like a nice ride, and the light in the photos looks lovely!
Top

Excellent Bob. I do like a bit of geographical basis for a ride!
Top

That's a great ride and now has me trying to find similarly helpful watershed mapping in Scotland! I suppose the Deeside Trail kind of follows that theme...
http://www.highlanddrifter.com
Top

I should add: bonus points for not calling it the The Aire Divide, even though that would be quite accurate

thenorthwind wrote: ↑Thu Mar 11, 2021 2:49 pm I should add: bonus points for not calling it the The Aire Divide, even though that would be quite accurate

Honestly didn't even cross my mind Dave! Geographically it is a watershed not a divide since the water falling to the east also ends up in the same sea.
Better weight than wisdom, a traveller cannot carry
Top

thenorthwind wrote: ↑Thu Mar 11, 2021 2:49 pm I should add: bonus points for not calling it the The Aire Divide, even though that would be quite accurate

Honestly didn't even cross my mind Dave! Geographically it is a watershed not a divide since the water falling to the east also ends up in the same sea.