The Sandstone (No) Way

The Sandstone (No) Way

I wrote some words about this for my local riding group, so though I'd repost them here - apologies if there's any references that don't make sense out of that context...

Back in the good old days when you could leave the house without worrying about catching a deadly disease or getting lamped trying to buy a bag of pasta (i.e. last week), I set out to ride the Sandstone Way. I thought I'd share some thoughts and pictures, in case anyone is thinking about whether they should do it or not (spoiler alert: not).

To cut a long story short, I did not have a nice time. I'm normally a sucker for a bit of two-wheeled masochism (as plenty of people who've ridden/pushed with me will tell you), and I'll generally take good old-fashioned XC over this poncing about on glorified road bikes (sorry) but after two hours of the SW I'd have given my left crank arm for a gravel fire road. A friend summed it up well when he commented that the route is too contrived to avoid (mostly deserted) roads.
Granted, the end of a wet winter is not the best time to do it, but I can't imagine it's a lot more fun in summer. The southern section particularly is mostly through enclosed farmland, on paths and tracks churned up by sheep or tractors or both, with the odd slog through grassy bog. 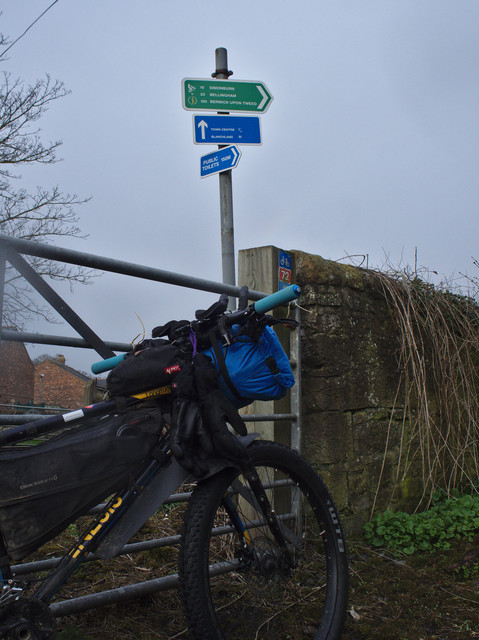 Anyway, I started from Hexham about 8.30 Tuesday morning. I'd planned to start Monday evening and get a bit done before stopping for night and finishing Tuesday night, but the forecast was bad and given the rain in town I'm pretty glad I didn't. The forecast was for rain early on but clearing up by midday. It didn't. Admittedly this didn't help with the overall experience.

Now, many people who have ridden the SW have mentioned the number of gates, so I can't claim to be surprised. I thought a good way to distract myself from the pissing rain and pushing my bike through ankle deep sheep sub standard would be to count them. I made 33 in the first 20 miles to Bellingham. I stopped counting at 40 when I finally decided to stop religiously following the route and started taking road diversions. 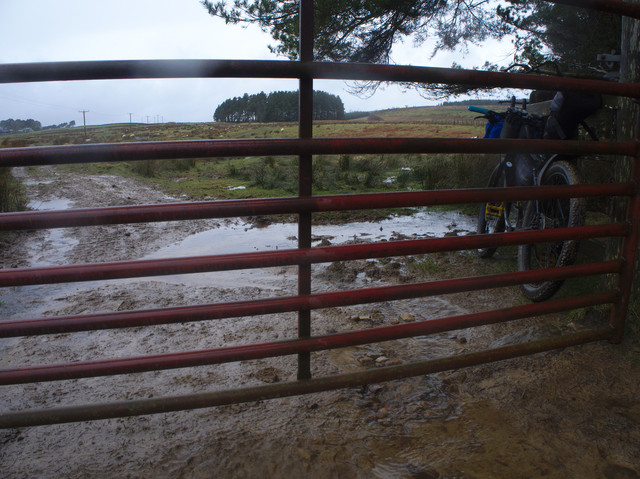 It was the middle of the afternoon before I got to Rothbury, soaked and covered in poor show, literally, (not even a visit to Tomlinson's to look forward to anymore) so I decided to cut out the carriage drive (shame, it's a nice ride, but I've done it loads of times) and the loop up Coquetdale to Alwinton (mostly road) in favour of getting to Wooler before the pubs shut. 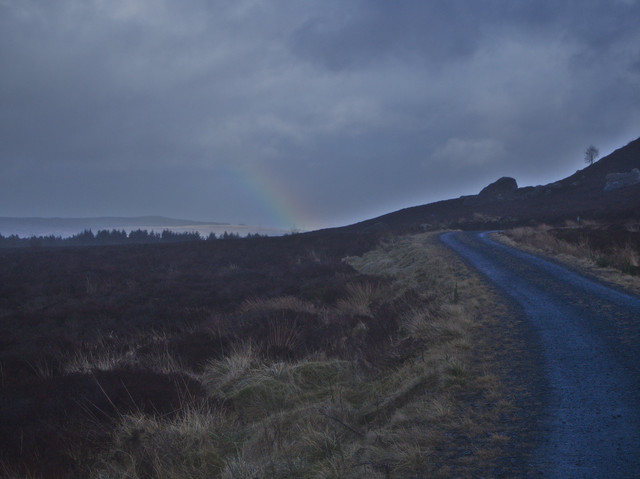 The track over from the Aln valley to the Breamish valley between Prendwick and Ingram is the sort of riding this route desperately needs more of - challenging, semi-technical climbing, but rideable, and big open skies. From there to Wooler is quiet road and byway - decent riding, but hardly the finest mountain biking. 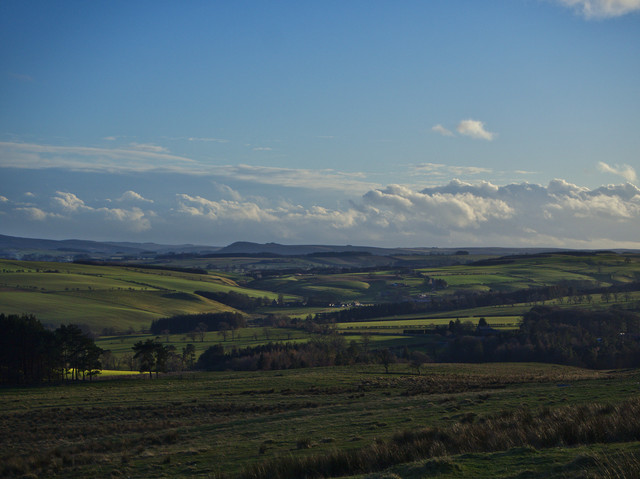 After some food in the Black Bull in Wooler I headed out to St. Cuthbert's Cave to bivvy. I'd forgotten how much I like riding at night under clear skies. I'd regained some trust in the route and followed it along the byway towards Chillingham. It turned out to be a decent track mostly, and I didn't run into any cows in the dark! 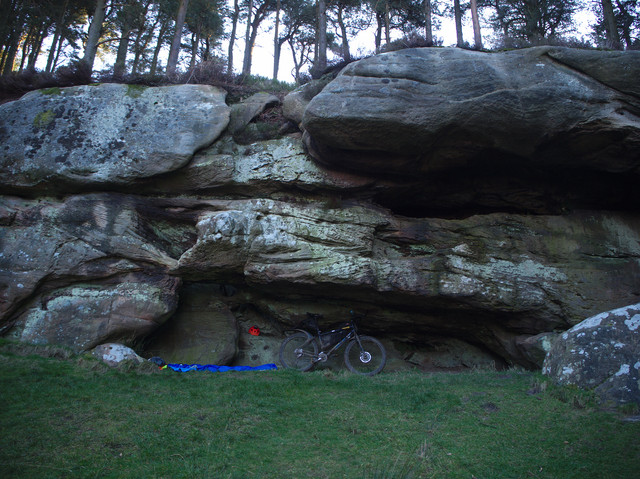 The morning promised 20 miles or so of fairly flat coastal riding, mainly on the Coast and Castles route, so should have been fairly quick even with unfavourable winds. However, the route had lulled me into a false sense of security and I made the mistake of following it down a bridleway against my better judgement. This summed the whole route up for me: to avoid 800m of tarmac (yes I measured it), it chooses a 500m path with 4 gates, a climb through some brambles, and a churned up field of mud with 3 frisky horses which pinned me in one corner and then chased me to the other side. 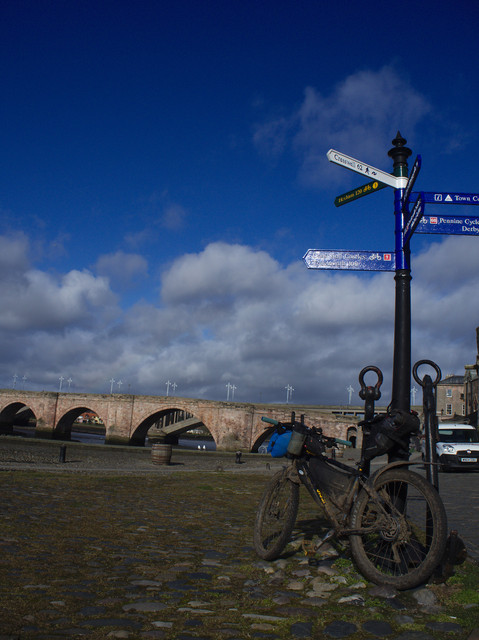 I don't think I'll be returning to the Sandstone Way anytime soon, which is a real shame because I love this general sort of riding, and I love Northumberland. Credit to the planners for all the work that's gone into planning, signing, and promoting the route, but I just can't imagine many people doing this and wanting to come back to the area to ride a mountain bike. If I wanted to put someone off mountain biking for life, this is exactly the sort of ride I'd take them on.

All this begs the question, "how would you do it then?" I like the concept of a route to show off the variety of landscapes we have in Northumberland - pastoral farmland, open moor, forest, big coastal skies - and I like the idea of roughly following the Great Whin Sill from the Tyne to the Tweed. But I think given the route options, and the popularity of gravel riding, that sort of route would make a lot more sense. Need to spend some time with the maps, and, when this virus has done one, recce-ing. Watch this space.
Top

I've only spent a little time in Nortumberland but when I have, I've thought how good the potential riding looks ... big days out ont' moors kinda thing. I very much like St Cuthbert's cave too but if that's the highlight, I'll assume the remainder not to be worth the effort.

Do you think it'd be much better during a prolonged dry-spell Dave?
#corporate shill for hire
Top

I enjoyed it but we did it five years over the August Bank Holiday weekend so it was mostly dry - some parts down near Hexham were boggy. Blog post here - http://bobwightman.blogspot.com/2015/09 ... e-way.html
Better weight than wisdom, a traveller cannot carry
Top

Bearbonesnorm wrote: ↑
Mon Mar 23, 2020 9:10 am
I've only spent a little time in Nortumberland but when I have, I've thought how good the potential riding looks ... big days out ont' moors kinda thing. I very much like St Cuthbert's cave too but if that's the highlight, I'll assume the remainder not to be worth the effort.

Do you think it'd be much better during a prolonged dry-spell Dave?

I can't imagine it would be much better Stu. I said as much and a local rider agreed, having done it in the summer, and there's more cows to contend with. If the churned up mud does dry, all the ruts will still be there, just set in "concrete." And Bob still found boggy bits at the end of August.

Having said all this, the website says someone (and I've got a couple of ideas who) has done it in 11 hours something, which, like most ITT FKTs seems impossible to a mere mortal like me, but proves that it must all be pretty rideable at some point. You could spend 11 hours just opening and shutting gates.

I would hate to put anyone off Northumberland, much as I enjoy largely having the place to myself - there's plenty of room, which is one of the attractions.

There's definitely plenty of big days out on the moors. Whether it's worth the trip for you depends how much you like that sort of riding I guess.

I genuinely plan to try and put a better Tyne-Tweed route together, but as I say it will be more gravelly, more varied - there'll be a taste of the moors, but it's hard to link together rideable bits up there without starting somewhere up there, rather than in the valleys.
Top

I've wanted to bivi there for ages but there are very few legal paths for cyclists in the vicinity so have never got round to doing it.
Top

I've wanted to bivi there for ages but there are very few legal paths for cyclists in the vicinity so have never got round to doing it.

I'm fairly sure the track that runs at the foot of the hill is a BW Ray, or do you mean there's few ways onto that BW from furter afield?
#corporate shill for hire
Top

I did it a few years ago. The Strava title was:
Death by a thousand gates.

Open a gate through cattle-churned ground. While doing so, looking at the farmers field you'll have to plow though and another gate at the other end of the field. And repeat
Top

I've wanted to bivi there for ages but there are very few legal paths for cyclists in the vicinity so have never got round to doing it.

I'm fairly sure the track that runs at the foot of the hill is a BW Ray, or do you mean there's few ways onto that BW from furter afield?

Yes, the path that runs past is a BW. A few nice tracks in the vicinity, but difficult to work it into a longer route without quite a bit of road. Some nice roads though if that's your bag.
Top
Post Reply
8 posts • Page 1 of 1