Set out on my first bivvy bikepacking adventure yesterday. Lots of lessons learnt in a very short space of time!

Loaded up the Lidl specials with as much as they could take only to realise my eBay special bike only came with one bottle holder which was rendered useless by the frame bag. Queue a frantic drive up to Taunton Leisure to purchase a new bladder for my Camelbak. That also meant i could take some
Extra bits.

The route in hindsight was ambitious at best. It was 22 miles on the road to Bellever, Dartmoor from my place in Exeter so from the comfort of my living room, plotted the most direct route taking in as much off road as possible, avoiding the main roads. This took it to 27 miles but foolishly took in some of the steepest valley sides that Teignbridge has to offer. By the time I reached the edge of Dartmoor I was hanging out. From Manaton I took a rocky and rutted route directly up the side of a tor which was barely walkable, let alone rideable. Add the fully weighted bike in to the mix and by the time I got to the top of the tor I was at the end of my tether. Seemed like a logical route from the satellite images but they gave no indication as to the severity of the incline. Maybe pay more attention to the contour lines next time. Heavy fog had descended across the moor reducing visibility to 100m or so. This was freezing on the descents and made the whole experience all the less pleasurable.

As I descended the tor I passed a fellow MTB rider and we had a quick chat. Little did I know he would save my bacon later, for I acquired a puncture around 10 mins on and soon realised the old pump I’d slung in my bag no longer worked. He arrived shortly after and we managed a repair. With this delay and the painfully slow progress, I was hugely behind schedule. On top of this, with my questionable route planning in the back of my mind, I decided to take the final 10 miles on the road to make up for lost time. The MTB was slow going due to weight and gearing and I found this frustrating coming from a carbon road background. I managed to roll in to The East Dart Hotel at 5pm, sink two pints and a burger and get to Bellever for 6:30 and the light was rapidly running out. I chucked up my tarp against a fir tree and was in my pit by 7:30. Due to doing this in the dark, I misread the slope on which I was sleeping which meant I spent most of the night wriggling back up my sleep mat. The alternative flatter ground was heavily water logged however. The tarp was adequate but not ideal and the damp from the fog clung to the tree and dropped on to my tarp above my head through the night and was occasionally flicked in to my face as the wind picked up. Another lesson here! I had a rough night with a noisy mouse scurrying around, the heavy wind and cold feet. I woke at 6, smashed a rehydrates chilli con carne and set off home. I took the direct road back which was just over two hours into a strong head wind.

The Lidl bags held up well given their price and I was generally impressed. The meths stove worked really well although surprised at how much it used. Despite all my errors, I’m not at all put off. I loved the challenge and getting home feeling like I’ve done something with my day off. Life can get very sedentary so it’s important for me to get outside for some physical activity. I love the feeling of exhaustion and Recovery.

In the future I’ll probably drive myself to the moor then use the energy on decent trails, rather than waste it on the commute there. I’ll research my route more and make sure I leave plenty of time to set up a decent camp.

If you’ve read this far then you’re probably as exhausted as me :) 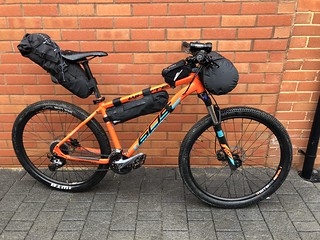 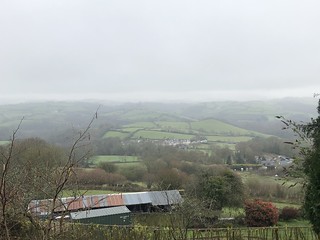 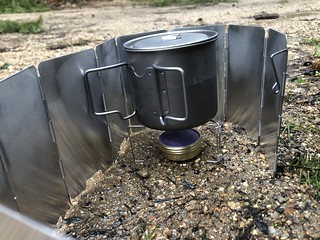 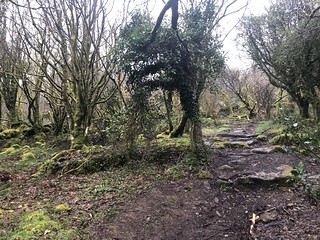 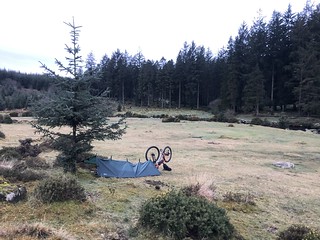 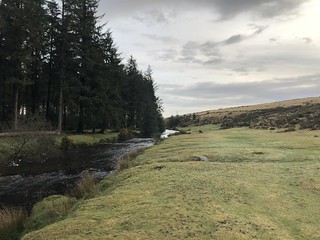 Good effort. I've been doing this for years and it's still a learning process.
http://www.blog.scotroutes.com/

I'll just have the one. I can stop anytime I like.

Welcome to the dark (and wild and wet and windy) side ;-)
Top

Yeah, you need the link that has. jpg at the end. If you are posting from a PC then choose the BBCode option. It's a bit more complicated from a mobile.
http://www.blog.scotroutes.com/

Good effort, it can be particularly steep down that way as I found out on the winter bivi.

When I reach a potential bivi spot the first thing I do is lay my bivi bag on the ground and lay down to see if the ground really is level. If it's dry I just lay on the ground. It's much easier to judge this way than looking at it

Compliments for honestly telling and elaborating the 'learning points'. They're usually more interesting to hear about than when stuff goes well. Same as Sean I always have a 'pre-liedown' to check the slope - I really don't like it when you wake up with your feet resting against a fence at the bottom of a field and the tarp is 100yds away at the top of the field.
"My God, I'm two-thirds of the way to the grave and what have I done?" - RIP

What was the fuel heavy stove, was it the Evernew?
Top

Just a cheapie EBay. small round tin with a screw top. Nothing fancy, was about £3 I think. Had a metal gauze over the top with some cotton wool looking stuff inside
Top

a great write up, bring on the next one.
https://www.instagram.com/bicycle_coffee_club/
https://fattyresandcampfires.blogspot.com/

As Colin says, none of us ever stop learning.

BTW, you could improve the efficiency of the stove with a better windshield.
What value a life half lived if the half you lived was the wrong half?
Top

Welcome to the club

As my dad would have said: the man who never made a mistake never learned anything.

It's always worth practicing things like repairing tyres at home before you have to. Having had a, umm, pump failure myself I now regularly regrease the seals and keep things in order. It's also worth keeping your pump protected from the grime.
Better weight than wisdom, a traveller cannot carry
Top

I don't think I've done a bivvy without doing something wrong. Sometimes more than once, to my shame..

Experience is a lousy teacher - it gives you the test before you've had the lesson.

Superb write up, learning is everything, like said by others
We're all learning always, said the hedgehog to the hairbrush

Thanks for all the comments and encouragement. Already planning the next one

Bearbonesnorm wrote: ↑
Sat Mar 21, 2020 9:21 pm
BTW, you could improve the efficiency of the stove with a better windshield.

In relation to this, do you mean the design of the windshield itself or the fact I’d left a gaping hole in the side of it? This was only to take a photo and closed it back up after.
Top

You certainly picked a choice bit of Dartmoor to get your loaded bike up!

Good effort. It's an ecouragement to get out and do my first bivvi of 2020 while I still can...

In relation to this, do you mean the design of the windshield itself or the fact I’d left a gaping hole in the side of it? This was only to take a photo and closed it back up after.

The design really Jim. With a smaller and ideally tapered windshield, much of the heat that now escapes could be directed back towards the pot. With regard to fuel use, open chamber stoves like yours do tend to be thirsty for the amount of output they produce - 'tis just how it is.
What value a life half lived if the half you lived was the wrong half?
Top

In relation to this, do you mean the design of the windshield itself or the fact I’d left a gaping hole in the side of it? This was only to take a photo and closed it back up after.

The design really Jim. With a smaller and ideally tapered windshield, much of the heat that now escapes could be directed back towards the pot. With regard to fuel use, open chamber stoves like yours do tend to be thirsty for the amount of output they produce - 'tis just how it is.

Ah ok, that makes sense, thanks for that. That’s an extra for the upgrade list then