Never done any of these BAM but just thinking I'll put my name down on the off chance.

We could team up now and then if you fancy? Although, I warn you I do have a tendency to procrastinate until the last day of the month!

No need for anyone to raise their hand, just get out there and post up whatever happens - we generally work on trust apart from Zippy who I think works on Excel

So..... Wednesday evening it is on (very much like the fabled Donkey Kong)!

The weather says it'll be dry all week and Wednesday night it'll likely only get down to 0°c-ish so, all things considered for around here in winter, things are looking pretty good.

I'll be going full-comfort though (as it'll be a ride after a very long day of hard physical work and be followed by another long hard day of hoofing wood around etc... and so I need a good sleep) - I hope you'll forgive my lack of hardcoreness.

Gonna ease myself in re: cooking options by taking the gas stove and packet pasta thingy (to minimise the sitting in a back-unfriendly position waiting for meths while my muscles contract and leave me paralysed).

I'll report back afterwards but really, really looking forward to it!
Top

The first of the year on the Winter Event.

Even though we'd taken tarp and bivy bag as emergency shelter but we really didn't want to be out during the rather wet and windy Saturday night. We turned up at Nant Syddion just as it got dark to find another four similarly damp souls already there. In the event we were all that turned up.

So 1/1 and 27 in a row for me.
Better weight than wisdom, a traveller cannot carry
Top

kipped in the above secret location with reg and froggy, I did however have the luxury of a makeshift sleep platform, nice and dry while Armageddon raged outside..

It was emotional.
We’re all individuals, except me.
Top

Look forward to seeing ur pics Steve after I was useless with mine...
"My God, I'm two-thirds of the way to the grave and what have I done?" - RIP

I've been in these parts several times in the last few years and wanted to, but never visited the Vaughan Thomas memorial. Dunnit. 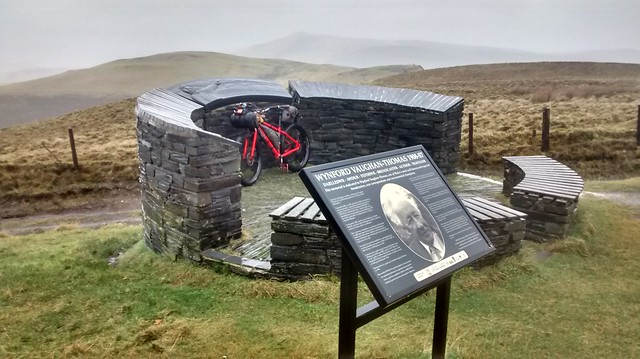 The view was wonderful - or would have been if I could have seen it.

I'd planned a route that would take me through Nantsyddion and end at Nant Rhys for the night, but I bumped into Reg, Rich & Steve at the turning for Glaslyn and my plans blew away with the wind. It was a good call because I had a great time with great company, and an interesting bivvy spot. 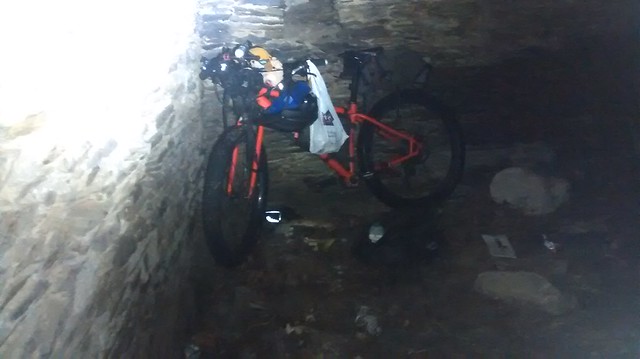 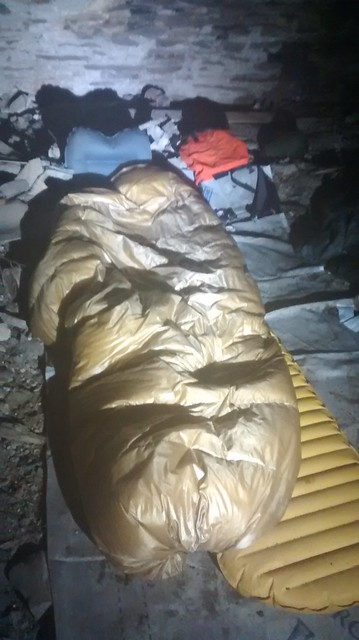 Next day I had to play catch-up with Reg & Steve because they were packed and ready to go a half hour before I was and set off to catch the half-nine train from Aber to Mach. How we would meet up - easy - we have electronic communication devices. Not! We forgot to exchange phone numbers.

Just as they had to set off the skies opened with possibly the heaviest rain of the weekend. Fnarr! Meanwhile I carried on packing and cycled down in the dry to catch the next train. 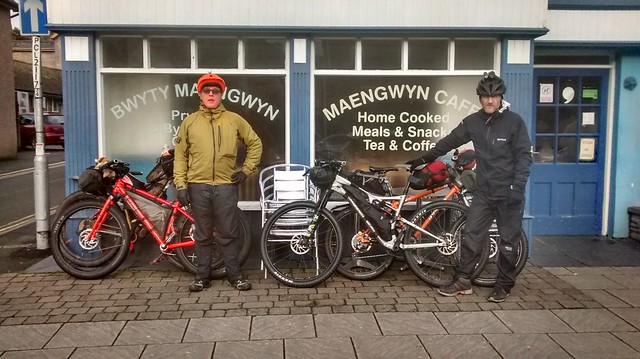 Whilst on the train, I'd sort-of planned a route back to the start but then I spotted Reg and Steves bikes leant against a cafe front and - bye bye plans again.

In to the caff for a jolly good (and I have to say moderately priced) breakfast while we waited for Pickers, who caught the next train after mine.

More lanes and BWs back to LlanBM. Teddy will never forget BAM January 2020 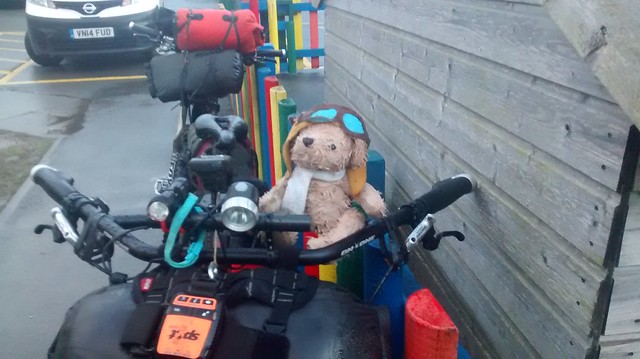 Another JanBaM on the BB Winter ride.

Part of the George posse but then rode off into the mizzle of the night to stop at a picnic bench near Devil's bridge. 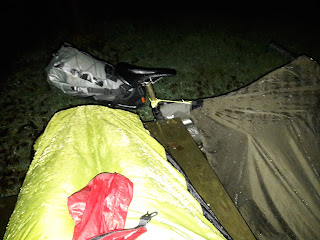 I had a new sleeping bag to trial and am consistently putting myself and my bivi bag through worse and worse conditions to see what we can put up with. Learning new things along the way. This time we learned we should have made better use of the Ugly Tarp, using it to keep ME dry instead of my gear. This is just excuses for not finding my way to a bothy.

Still, I managed to keep going on 2.5 hours sleep and rode further than I'd even have imagined this time last year. 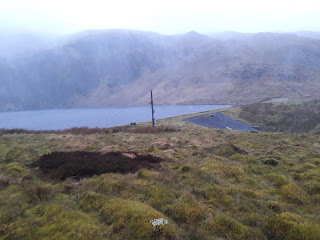 It's not the most beautiful I took but it is the most emotive and colourful. You can almost feel those sheets of rain.

It was nice to meet you in the George (or "The Borrowers" as I now seem to be calling it!). Dead impressed that you cracked on into the rain to Devils B and that 2.5 hours "sleep". Interesting that we'd both homed in on that spot that you ended up at, although I think our alternative strange port-in-a-storm croft thingy was a tad more watertight

PS> Have now read your full report - am just in awe of your mileage, fortitude, tenacity, resilience, madness, etc etc my bikepacking vocabulary has ground to a halt

Thanks Reg. I use it to cover up my lack of speed.

Here we go again, hopefully will make a better effort than last year.....
Had a few ideas about this one but ended up doing a route from home as per. Left at about 4 and headed for the hills, specifically a spot by one hill with a lonely Sitka Spruce that has self seeded from a nearby plantation.....

I was quite chilly (about -1 I reckon) and quite breezy so on arrival I dived under said tree, erected a bit of a windbrake and got into the bag sharpish. Then spent a cool but pleasant evening cooking and eating tea, having a beer and dram or three and reading. Slept for 8 hours straight then packed up sharpish, bombed down the hill and headed home for a late breakfast 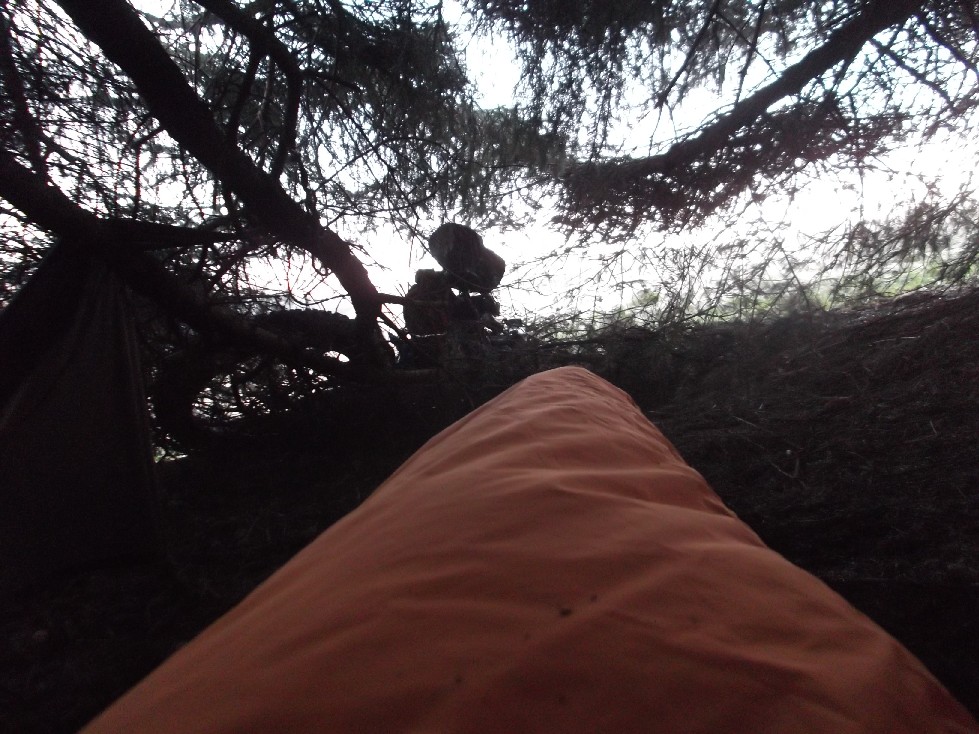 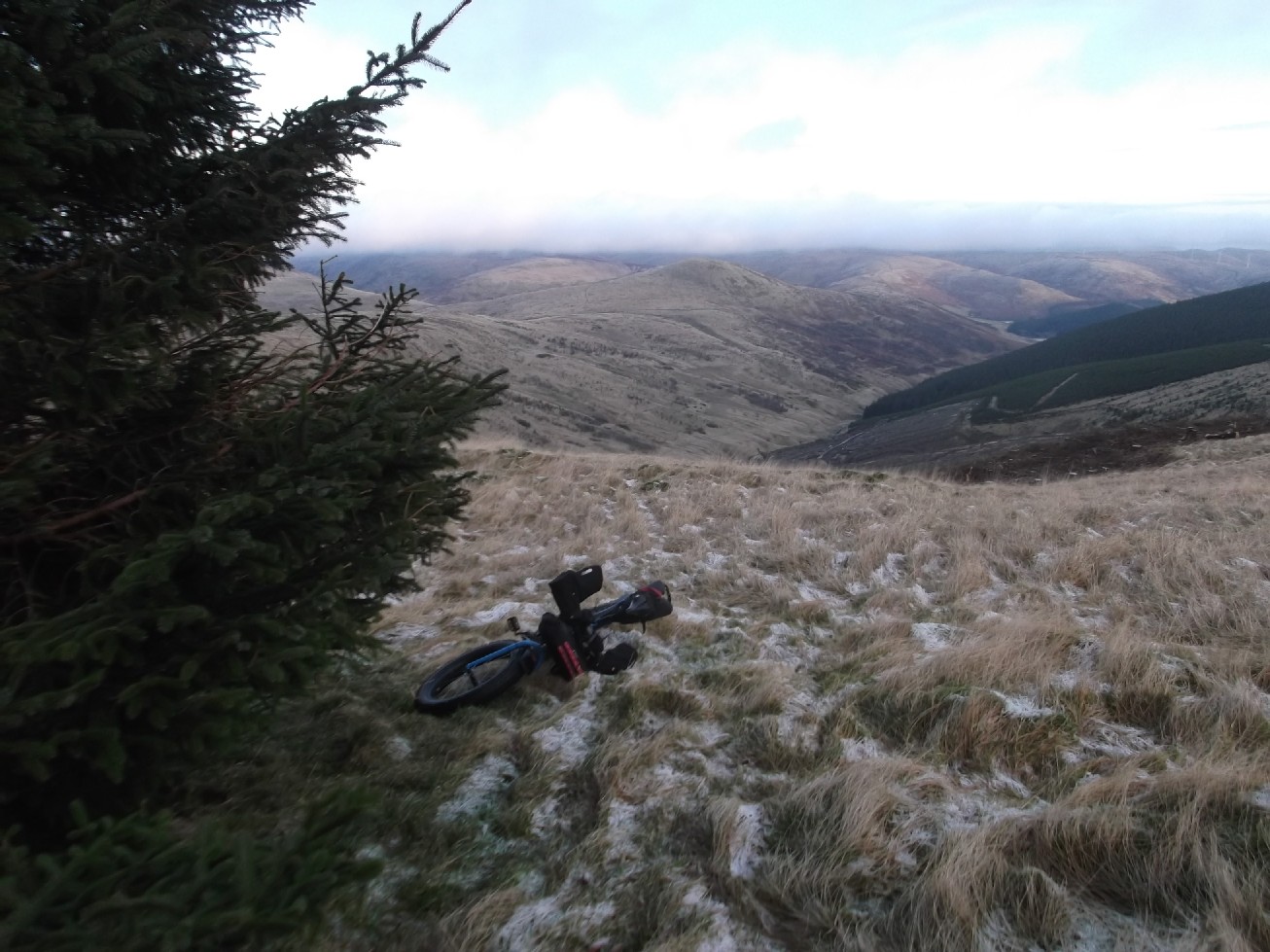 The tree and the view down below - Sitkas look pretty good when they are allowed to grow un-fettered by thousands of other ones. I discovered this spot two winters ago on a ski excursion. In under the branches by the trunk there was a nice dry space, fairly sheltered from the wind and reasonably level.
http://philsbikepacking.blogspot.co.uk/
Top

With perfect conditions to kick off my BAM I ventured to the forest of Beddgelert and pitched up high where I knew I'd have some fine views. I'd camped close to this area back in 2014 but I pushed and cursed a further 450 feet up to the ridge named Y Braich which is on the northern slopes of Moel Hebog. And true enough I was rewarded with some stunning views! A windless night saw temperatures drop to below freezing but I was comfortable enough. 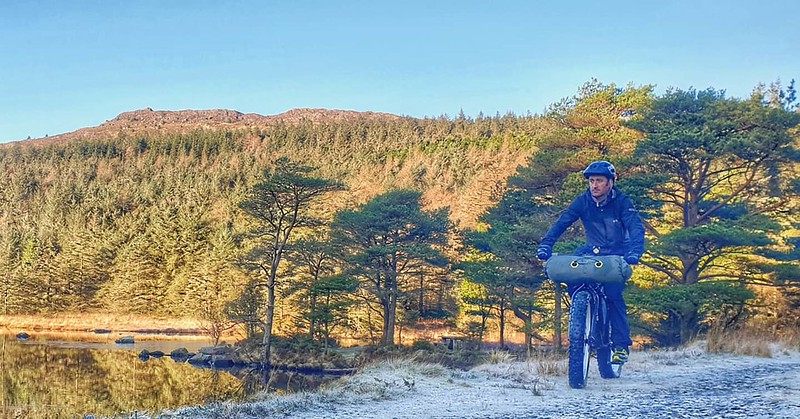 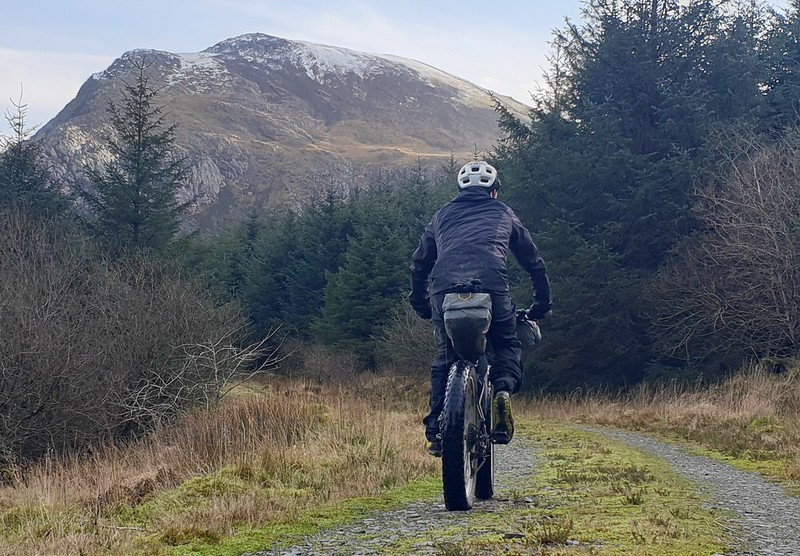 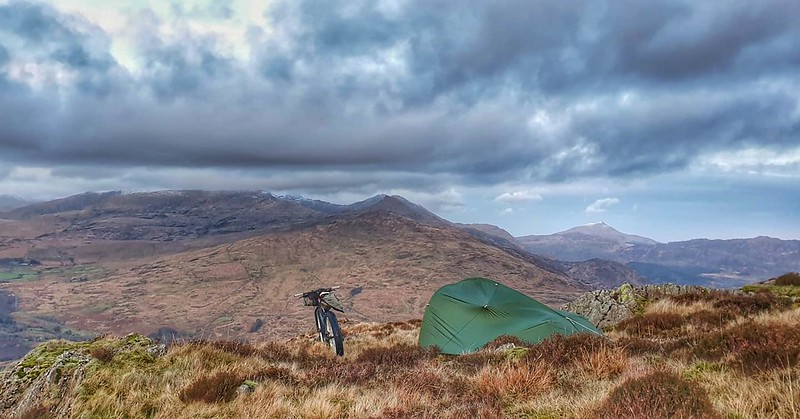 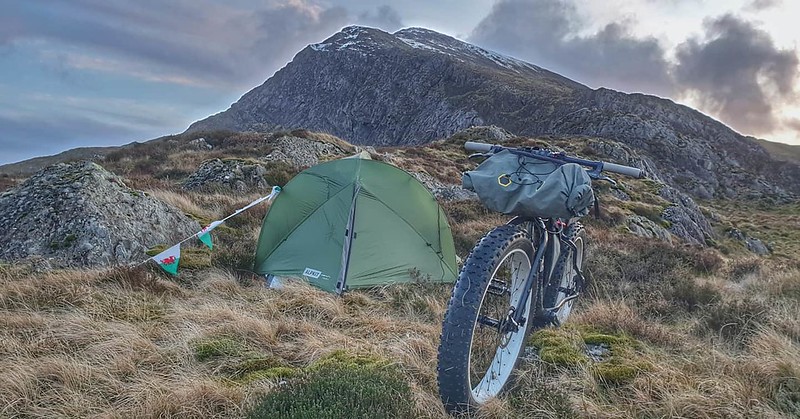 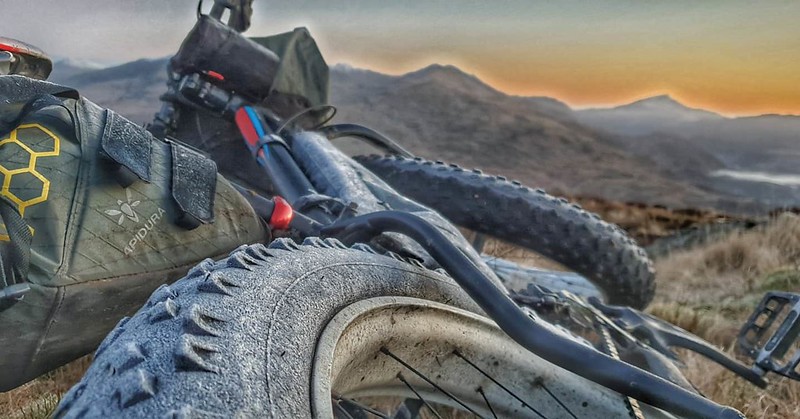 Lets home it gets better from now on!!

I'm still not sure I'm doing BAM this year but might stumble through it, so.....


I had a Tour de Ben Wyvis in mind but a combination of circumstances knocked that on the head so Metalheart and I took ourselves off to one of our favourite locations in Glen Feshie (via the Loch Insh Boathouse for food and beer). It was a cold one right enough. -5 or -6C overnight. There was frost forming on the tarps even as we were pitching them. Lovely clear sky though and no breeze made for a comfortable night.

Great sunrise - just enough cloud to show it off.

MH wasn't feeling great so we took teh short/quick route home. I made a wee detour to a monument I'd seen marked on teh map but never visited. And maybe found another good bivvy spot 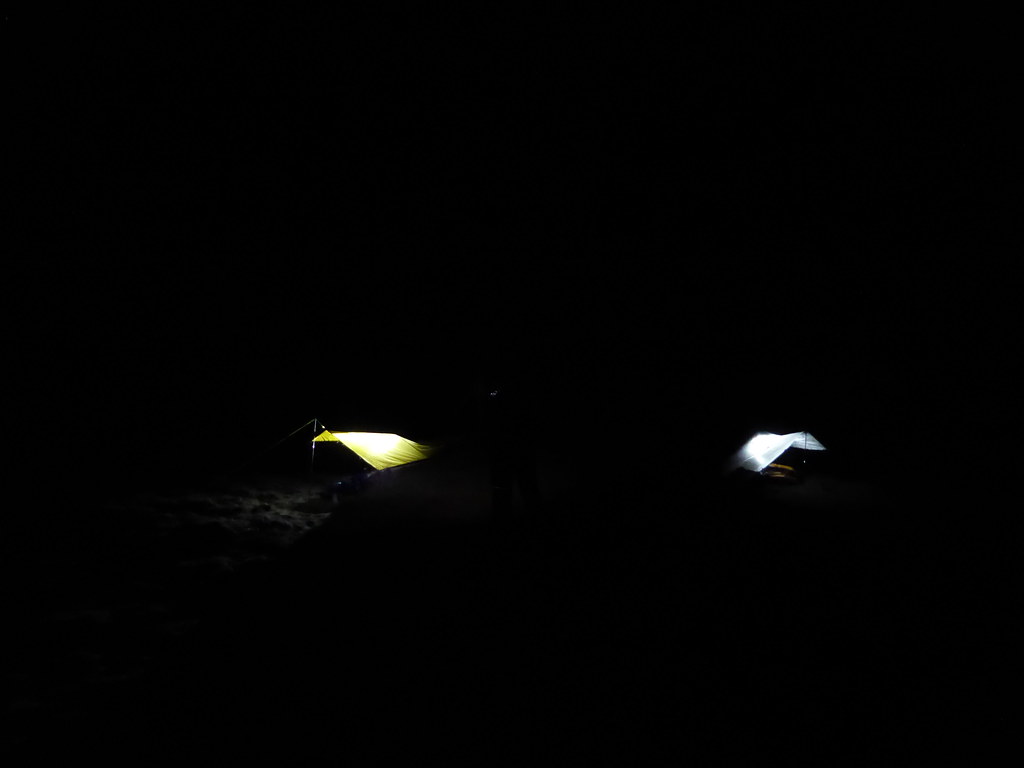 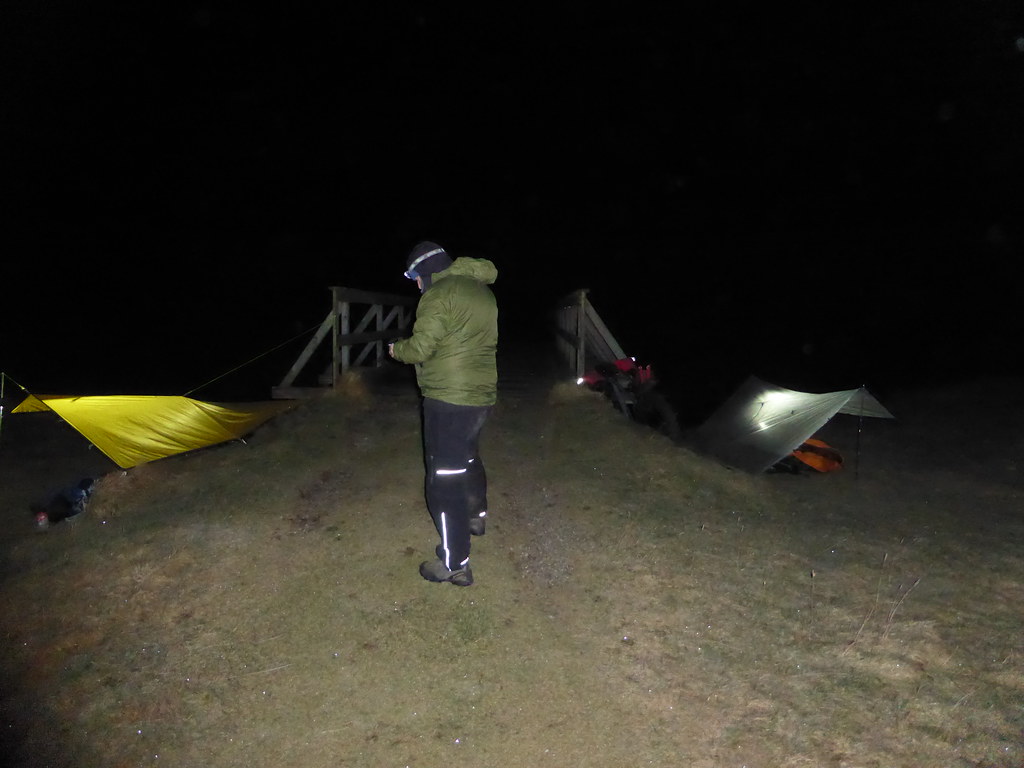 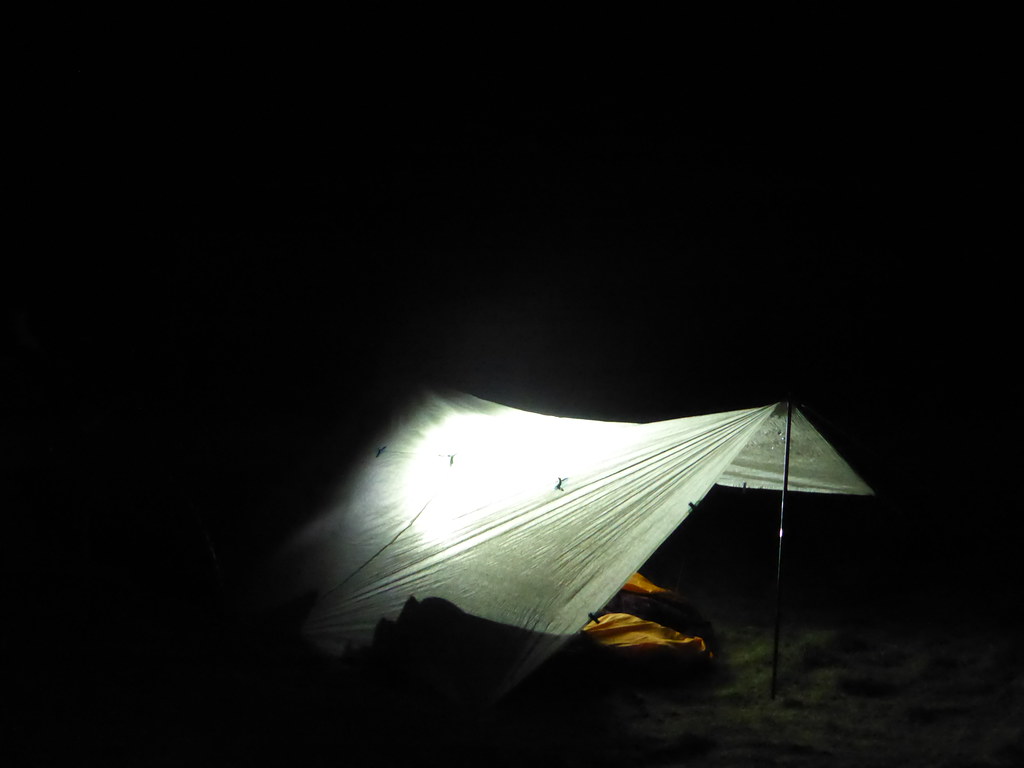 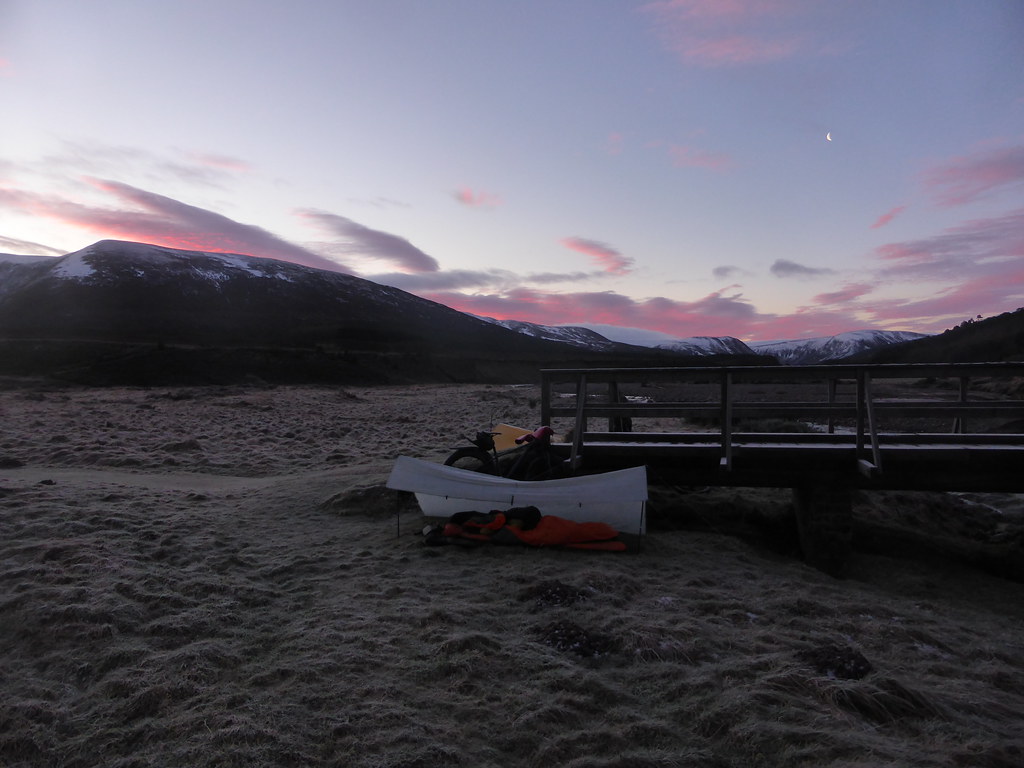 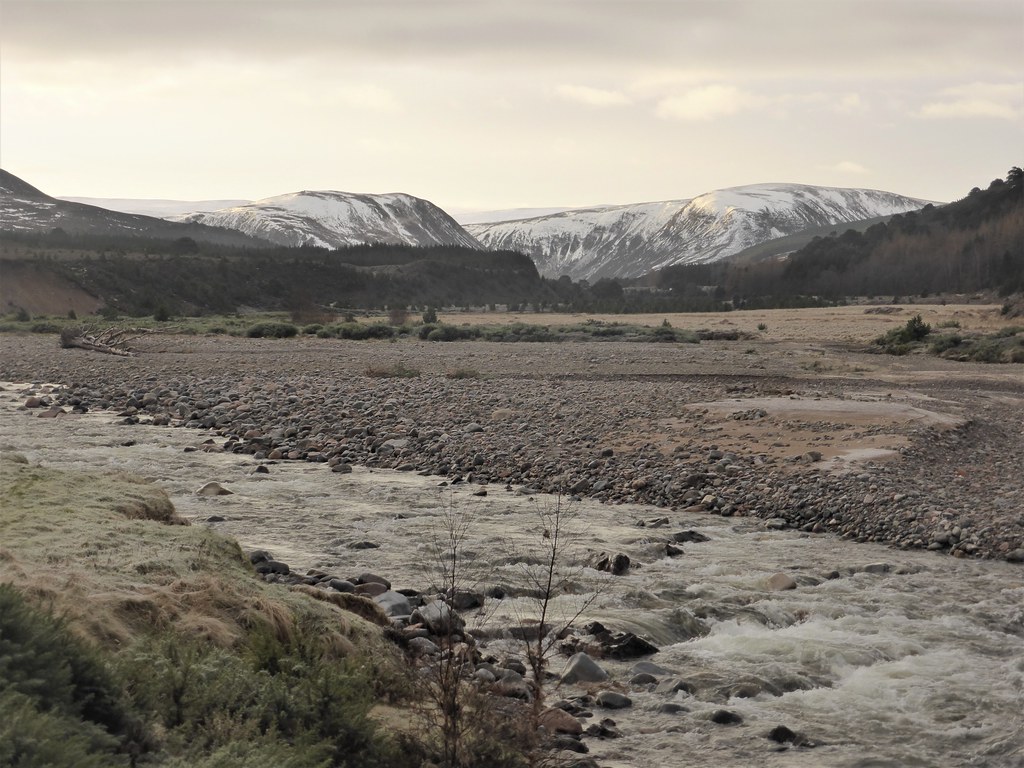 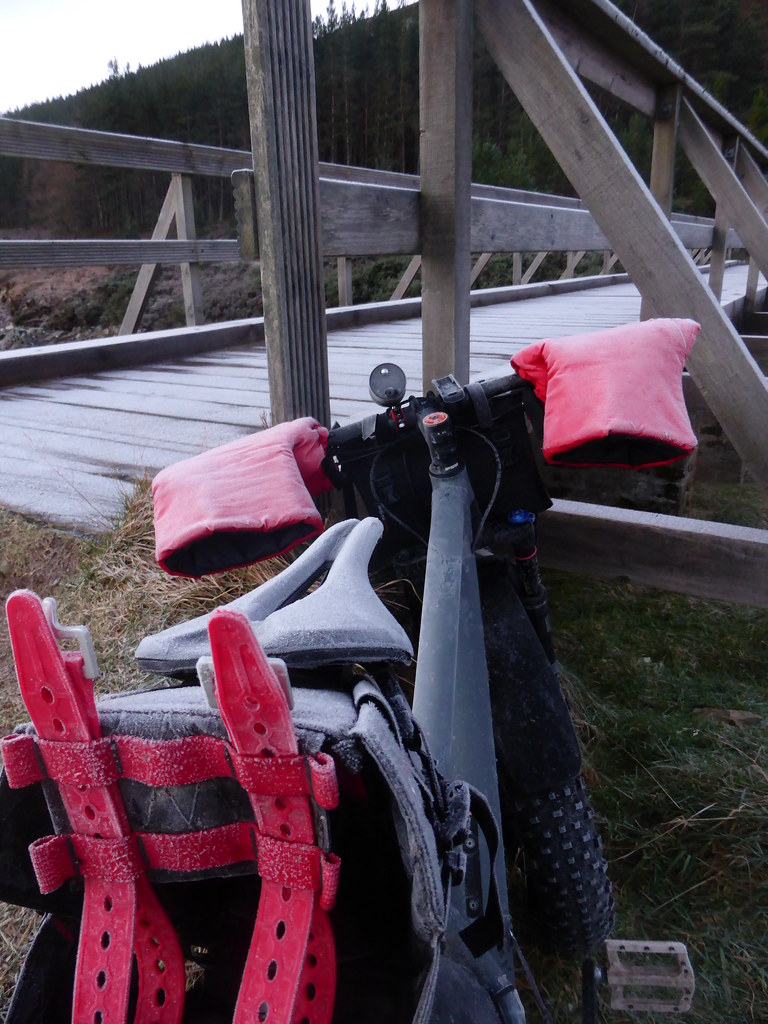 Nay wind?! It was blowing a gale down this way....
That a new terrapin harness Colin?
http://philsbikepacking.blogspot.co.uk/
Top

Naw - that's my old one. Maybe the straps are putting you off? They're just Voile-alike straps I take along in case I want to strap something (e.g. waterproof jacket) onto the Terrapin.

MH has one of the new ones. Not that I'v studied it to see if it's worth "upgrading", or anything like that......
http://www.blog.scotroutes.com/

Very much in the same camp (hoho) as Scotroutes, not sure I’m in it for the long haul this year.

Here’s some more photos from Feshie... 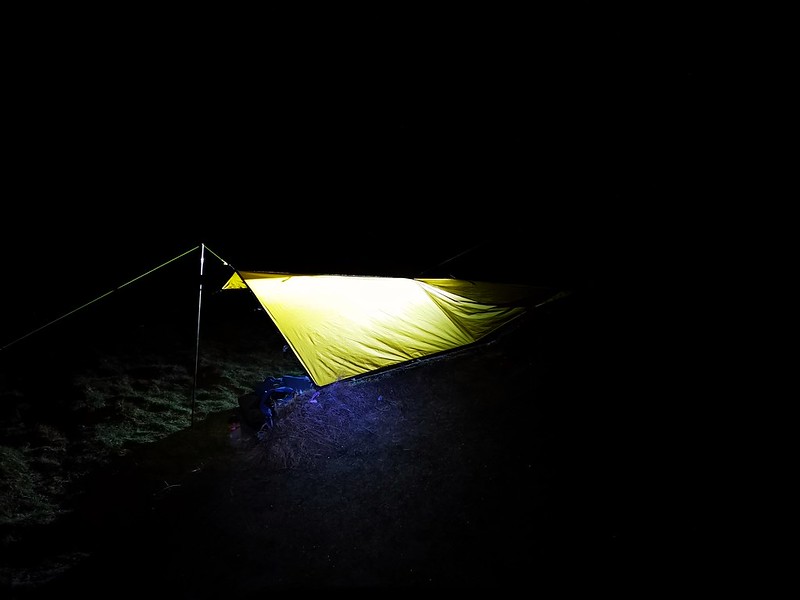 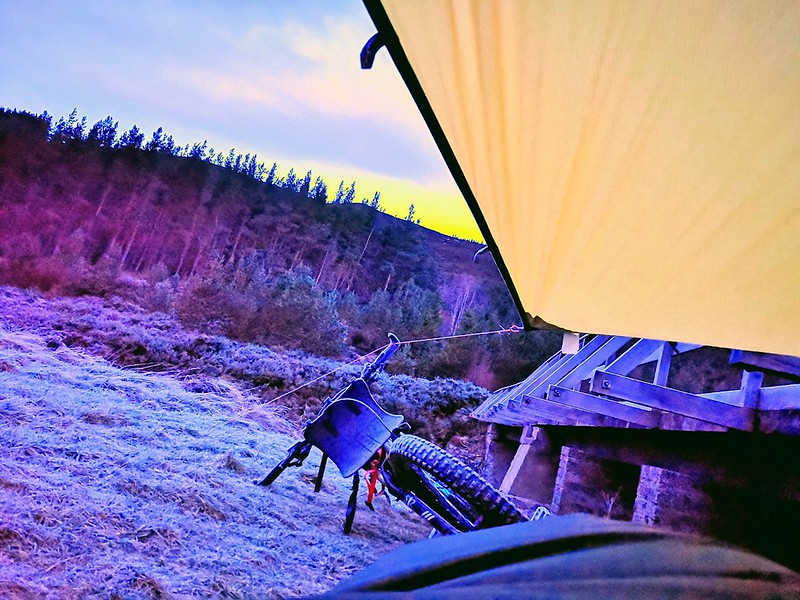 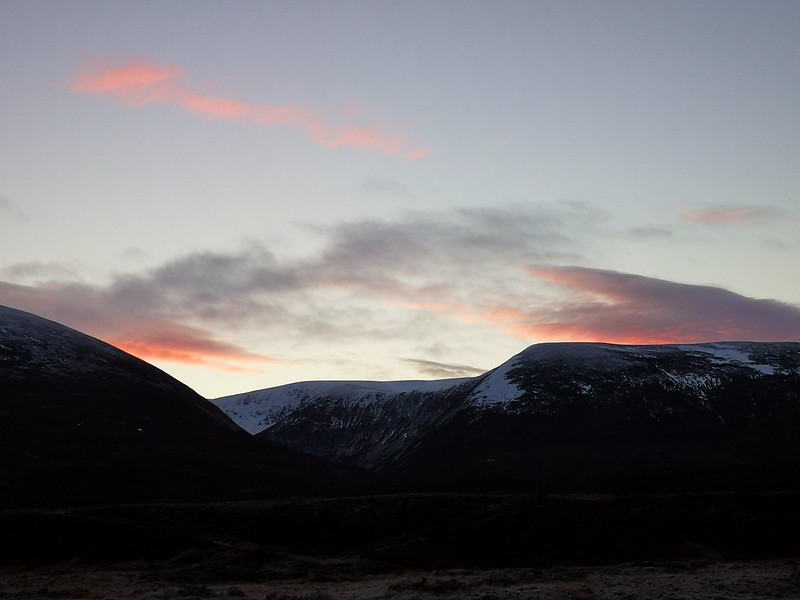 Give the dirt a little room.
Top

I can confirm that bikepacking and the onset of norovirus are not the best of bedfellows...
Give the dirt a little room.
Top

Finally, I actually get a January Bivvy under my belt.

I headed out from home with a notion to ride till I found a chippy and somewhere to kip.

Then it dawned on me that a half sensible sunrise was forecast. So I decided I'd pop down to Botany Bay and get a pic from the beach.

It was blowing a hooli from the NW which was whipping around the North Foreland so the beach was out.

The Neptune Tower became home for the night and I did manage a snap on the beach in the morning.

The first 30 miles back was into the NWer and I was grateful for a cuppa at Whitstable.

A few cuppas with various friends along the route home saw me complete 116 miles, mostly on lanes and cycle routes.

Just chuffed to have my gear all together in one place and the bike sorted.

Roll on more nights under the stars.

Still not got my head around posting pictures.

Is it possible to link to Strava activities? I always pop photos on there to act as a memory cue when looking back.

Hopefully get out for some social bivvying soon.

Check out my activity on Strava: https: ... 6LXXWGnos3

I've given you some pointers in the image posting test thread...

Yes. Click on the icon that looks like a chain link, just above the text box. It's the second last one in the row and it'll give you a URL tag in your editor:

You then have the option of pasting the Strava URL in between the opening and cosing tags:

Or, you can give the link a more descriptive flavour by:

Which should give you a hyperlink -> This was my ride yesterday...
I like beer.

Cheers bud, it was a cracker. Film will be online by the weekend....
Twitter:
https://twitter.com/JeffPrice1j?lang=en-gb

Here's my film from last weekend in Snowdonia:
https://www.youtube.com/watch?v=FL7O-qVBH8M

Excellent again Jeff, really captured the colours and feel of your trip there