Speechless. What an amazing achievement in the time, and such a fantastic present for those guys - faces say it all. Lump-in-throat job

Brilliant Sean. Reading that brought back so many merories of pulling all-nighters either in the workshop or at a dragstrip somewhere ... weirdly, I also kind of miss it.
What value a life half lived if the half you lived was the wrong half?
Top

It was quite emotional in the morning, 2 of us have lost our own fathers to cancer so with the Grooms father's condition we weren't going to let him down if we could somehow get it done. There were a few watery eyes when the car backed out of the workshop.
Adventure without risk is Disneyland - Bikemonger
Top

I think that's probably it - the sense of achievement and perhaps beating the odds. The more things are stacked against you the better it feels - well done

As you say Stu, all-nighters (biking, engines, mistresses (yes and masters!),whatever) are always a bit flappy at the time but strangely missed afterwards

If you're really missing it, could do with a bit of help tuning this one. Paraphrasing Croc Dundee: "Call that an engine? THAT's an engine"

We’re all individuals, except me.

. Bore you with it another pub time

Weirdly, the chap that made the wiring loom for the Escort wires trains by day, actually often it's night shift if they're working on current stock.
Adventure without risk is Disneyland - Bikemonger
Top

. I'd better get back on topic now or mods'll start chuntering

Suffice to say the situation all started with an evening in the pub that went horribly wrong...

9/9
A return to Reg's woodshed of last week, to get September BaM completed at the warm, dry, end of the month

Nesting birds kept me company. Fitful sleep on deflatables, before an early ride home to coffee and brekky

Anyway, riding stuff. It's all got a bit difficult trying to fit stuff in this summer. Did the Jenn ride, then a quick one to Burbage last month with terrible tarp technique, and now we're out for September. Having to keep it local as Joolze has to be somewhere else tomorrow. Also need to catch up with the forum and people's adventures.
Top

We’re all individuals, except me.

You're not having much success with that route at the mo! Hopefully the third time will be the charm.

Not much success at all. I blame it "that I'm soft"... Twas a good walk anyway and felt I had enough HAB to last a few years. Made it through to the final swgments after a big breakkie in Edale (Flowerpot cafe where the chap even set me up to wash my bike)... What a lovely route but I suppose not for the faint hearted (ie. Me)...

Yet another late catch up post! July's effort for 7/7 was a work night bivy where I actually headed out before 8pm for a pleasant change. My aim was to leave myself with about a 50km ride to work for the morning, so I wouldn't have to set out too early. The nights were still long, so I had plenty of daylight to play with on the way out. 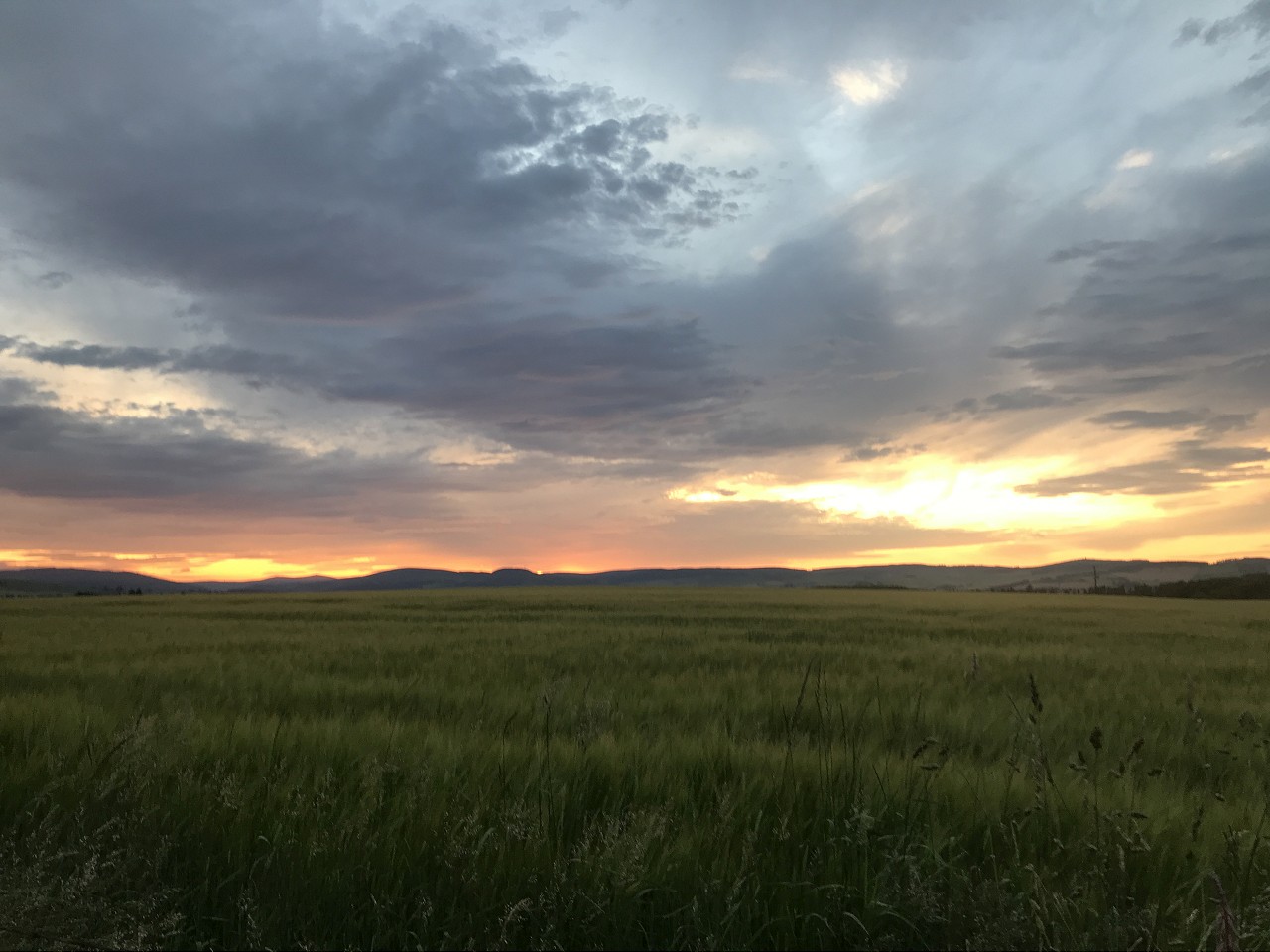 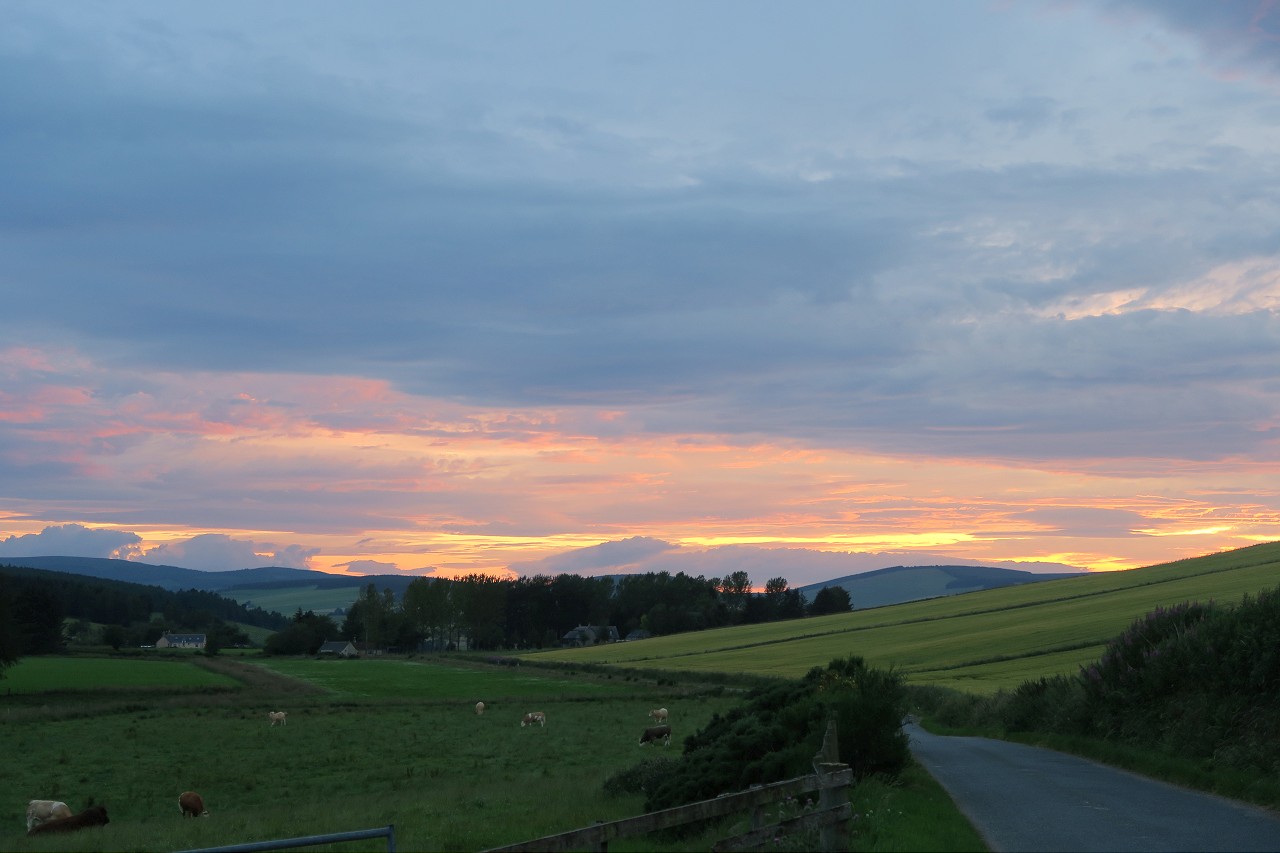 I was ticking off VVE explorer squares as I went, as I don't often have time to head this far out from home. As I reached the corner for Queen's View, it was time to take the slicks offroad and see how much of the climb to the summit of Craiglich I could achieve on the road bike. Maybe 50%, as it turned out. The track lower down was pretty overgrown with gorse, making for mildly painful progress, but I was back in the saddle once through it before a quick push out of the trees to spin my way along to the summit on a lovely track through the heather in near darkness. 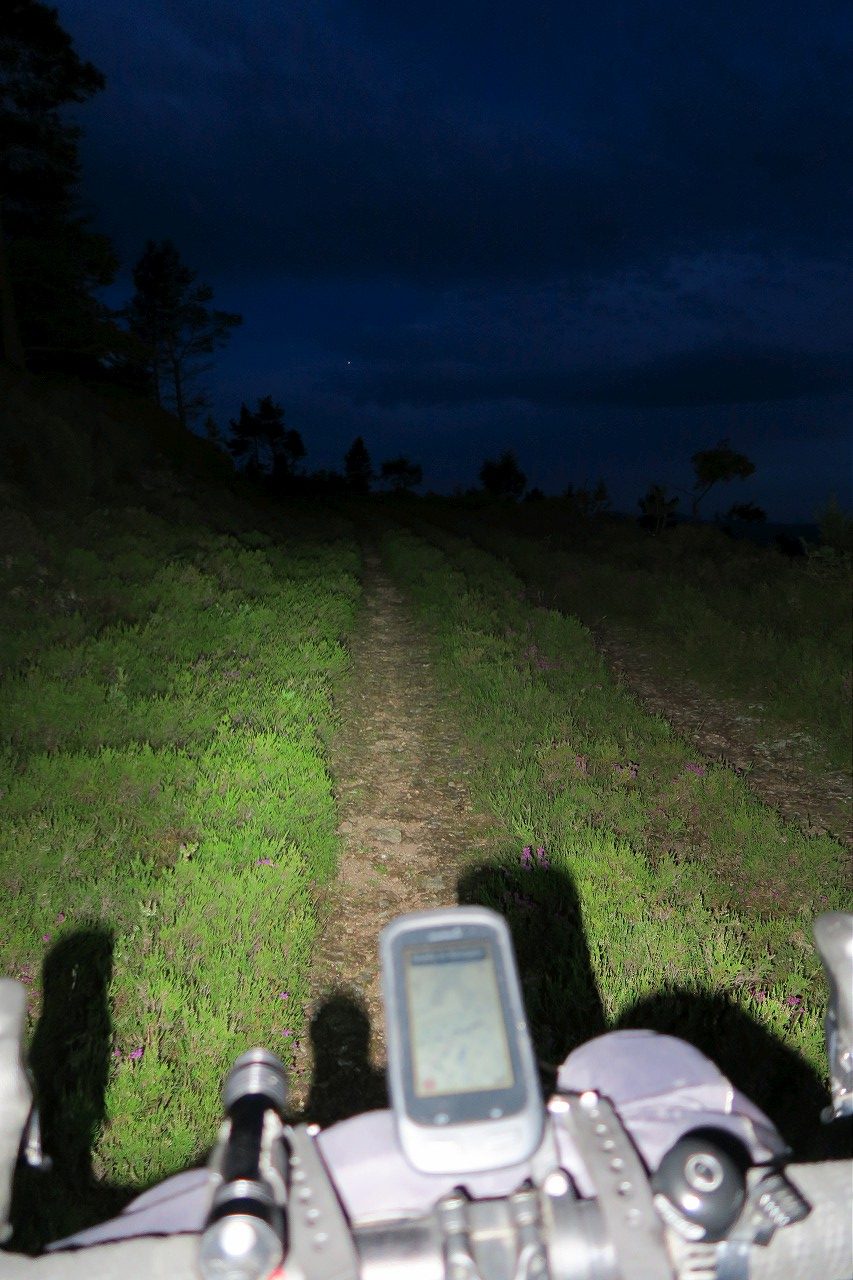 Up top, the views were expansive and exceptional, even though the sun had long gone down. 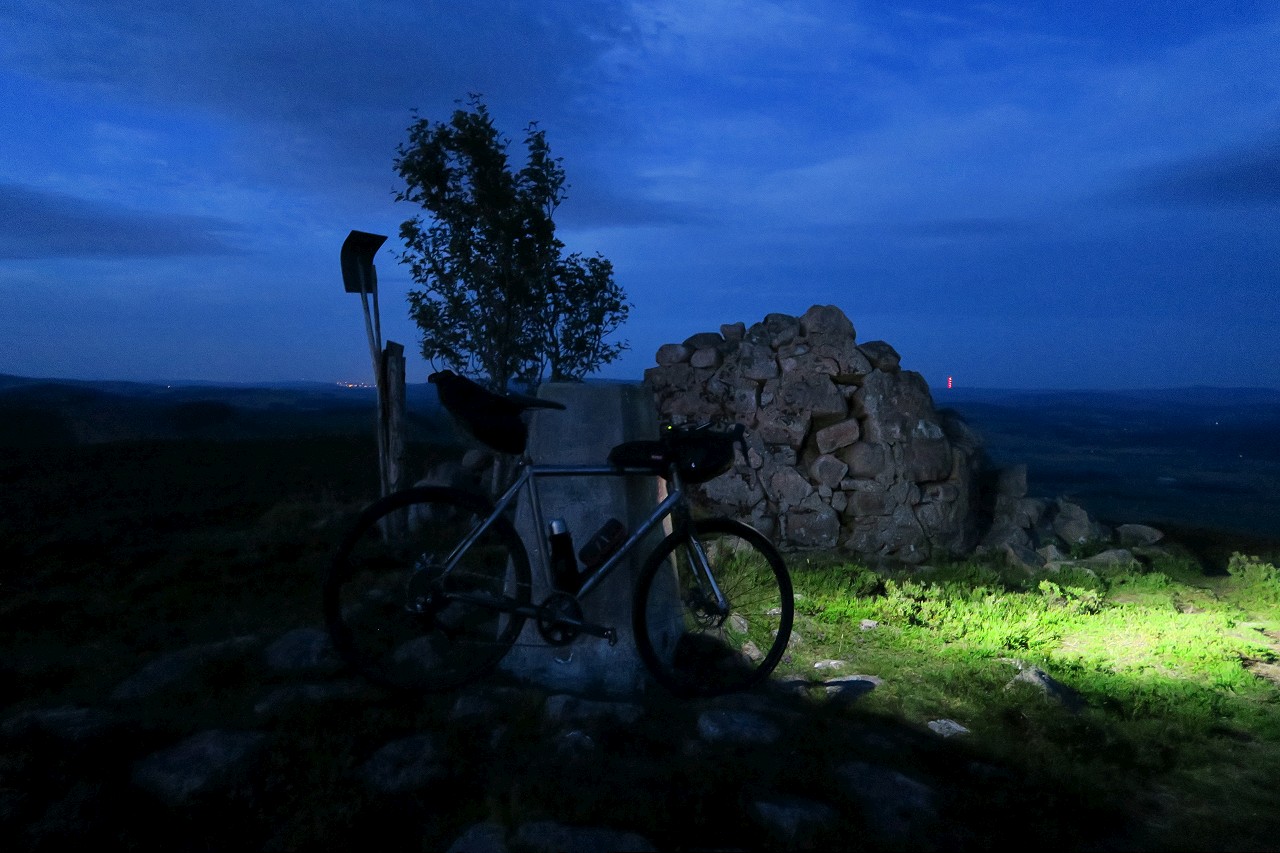 I got myself set up in the shelter of the summit cairn as there was a nice breeze and I didn't have a sleeping bag, then enjoyed the view with a brew and a butty. Midge-free heaven! I slept well enough, but was awake not long after 4 to see the sunrise, before snoozing a while longer. Once up, I mooched about eating and taking photos of what was a lovely bivy spot. 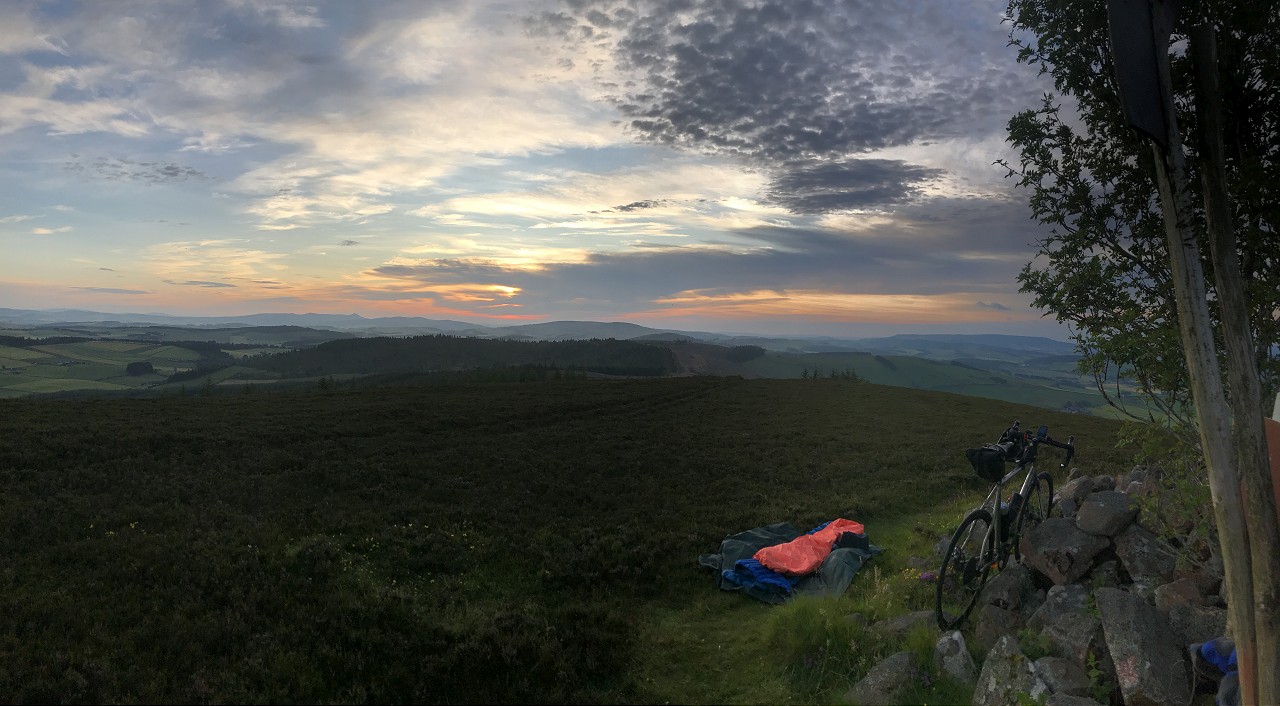 Once packed up, I had to get off the hill via a route I hadn't done before, which was going to be interesting on a road bike. Only had to walk a muddy descent and the rest was grand. 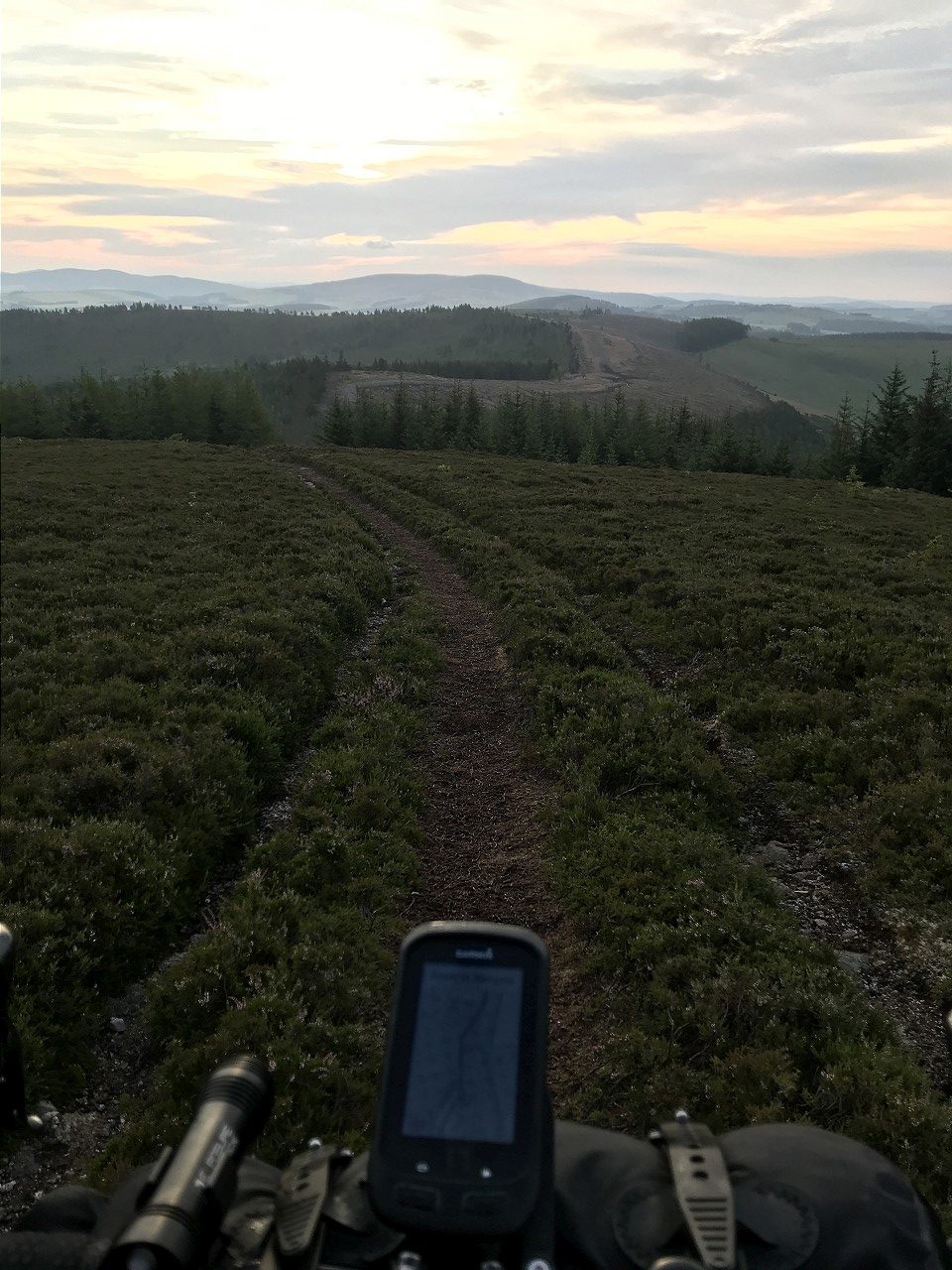 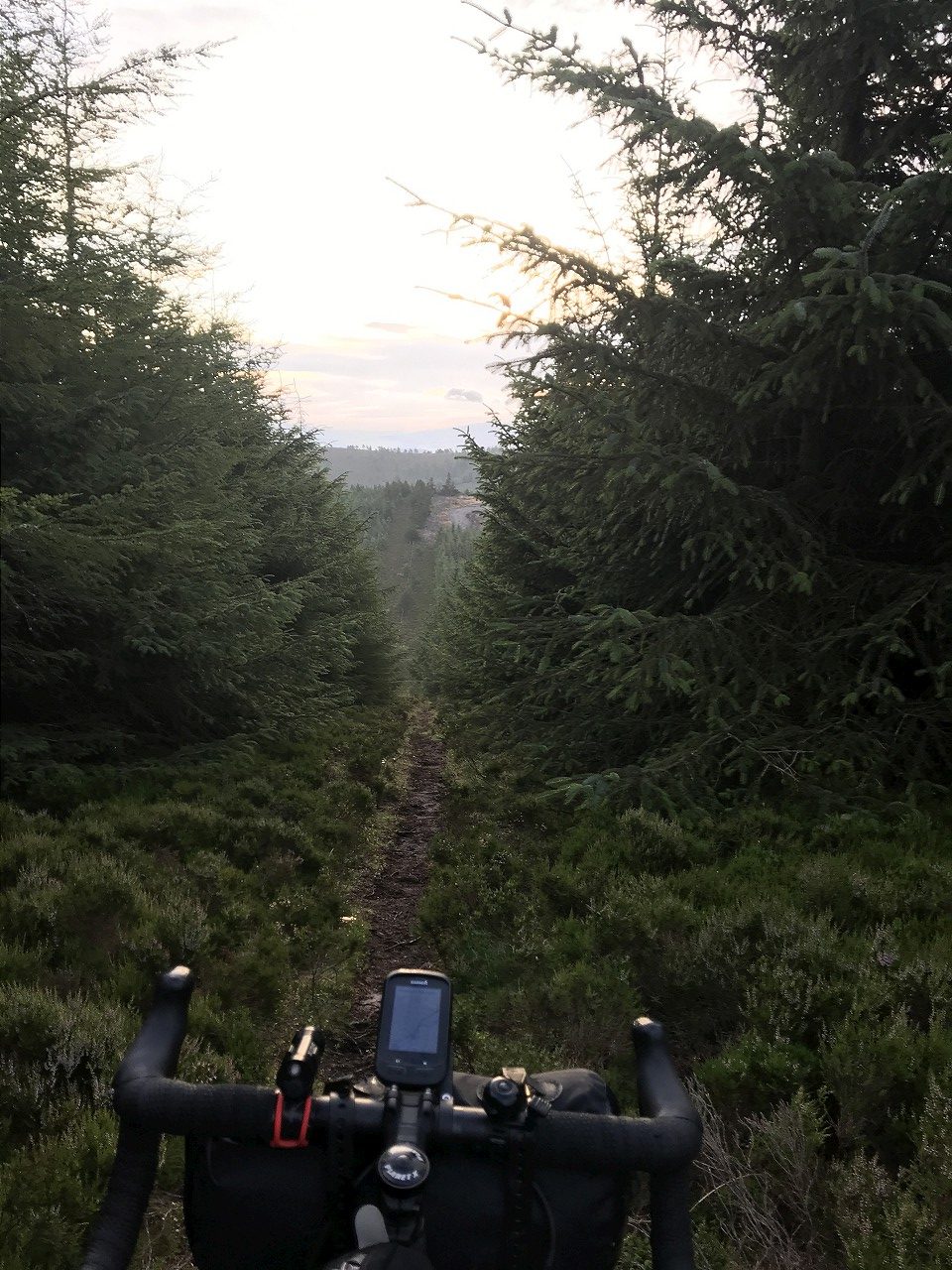 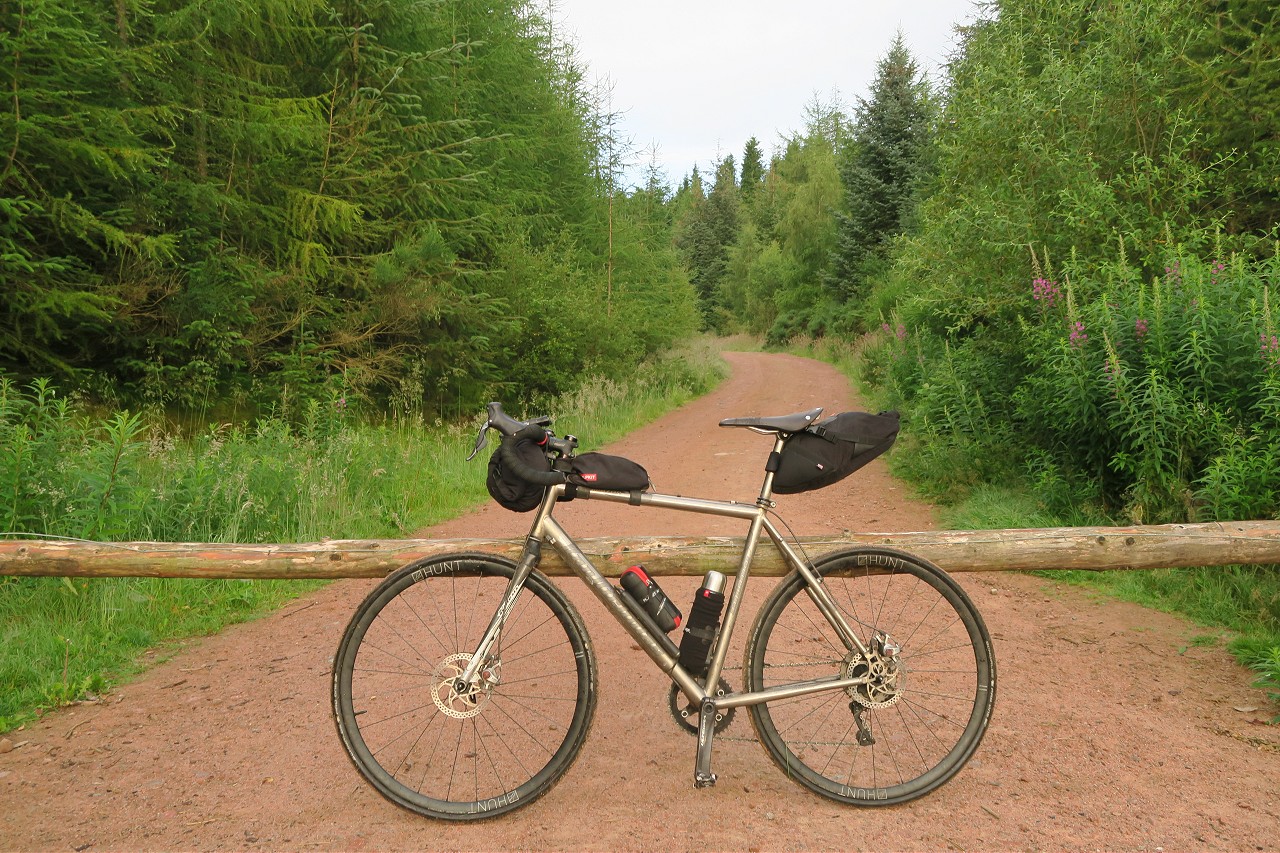 Once back on the tarmac, I upped the pace and made my way quickly downhill to Aberdeen and was in work nice and early for once!

Thanks, was one of those overnighters that just came together nicely, apart from nodding off at my desk in the afternoon!
http://www.highlanddrifter.com
Top

I'm still playing - need to catch up with the thread. Enjoyed your story about the escort Sean, good effort!

The plan for August was to do the Lakeland 200 with a bivvy, main reason for the trip to the Lakes was to support my gf doing the Coniston chill swim (5.25 miles one end of the lake to the other) - I thought I could shoe-horn in the Lakeland 200 and still be on babysitting duties.

So I did actually about 70km in the end - started at Hawkshead, bike was working really well since I fettled it the weekend before, I was hydrating and fuelling well - weather was kindof behaving, fitness / bike skills / energy levels all reasonable enough. Fair enough, the route is tough - but I basically got to black sail pass, the weather was closing in (had the kit to cope) and the forecast for the next day was terrible...I packed it in as I just didn't fancy it...heart and head weren't really in it. Had a decent days riding though, and nothing broke.

So as this meant I didn't bivvy out - I got back to the campsite and did a lap of it (I had carried all my kit for the day - minus some tent pegs I'd forgotten...), then got the bivvy out and had a night sleep. Now I hadn't paid to bivvy at the campsite, I'd only paid for a tent which I wasn't in, so whilst I think it's close, I'm pretty sure I'm within the rules - and just about within the spirit of the thing. Tis a bit odd pitching up next to my car though 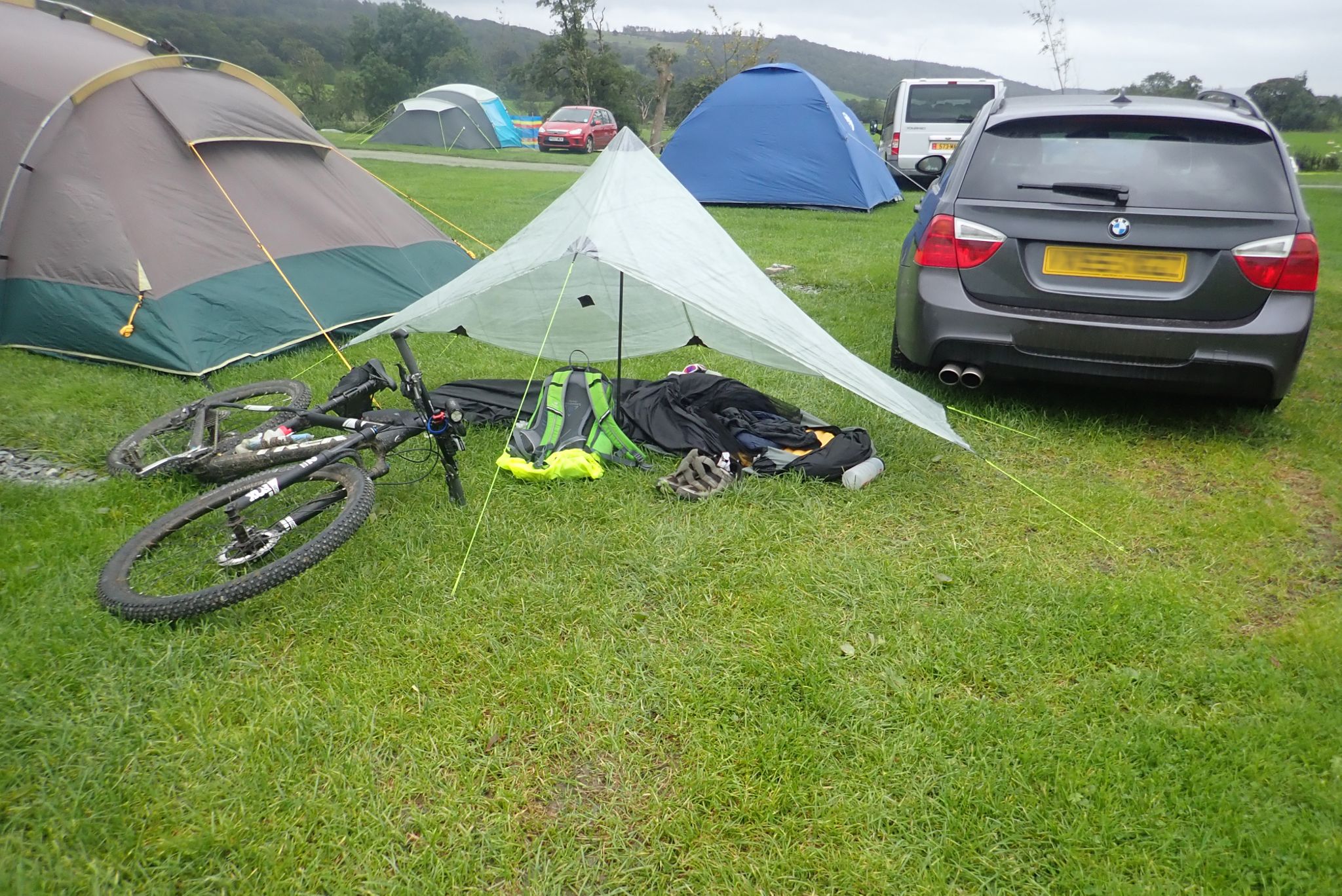 "Now I hadn't paid to bivvy at the campsite, I'd only paid for a tent which I wasn't in, so whilst I think it's close, I'm pretty sure I'm within the rules" - Hmm!!!!

I'll get on it when I have a chance...
about.me/zippyonline
Top

Just throwing in my August bivy to get me up to date. Was a last minute quicky on the 31st, combining some VVE square captures with a comfy hammock kip in a wee forest out West of Aberdeen. 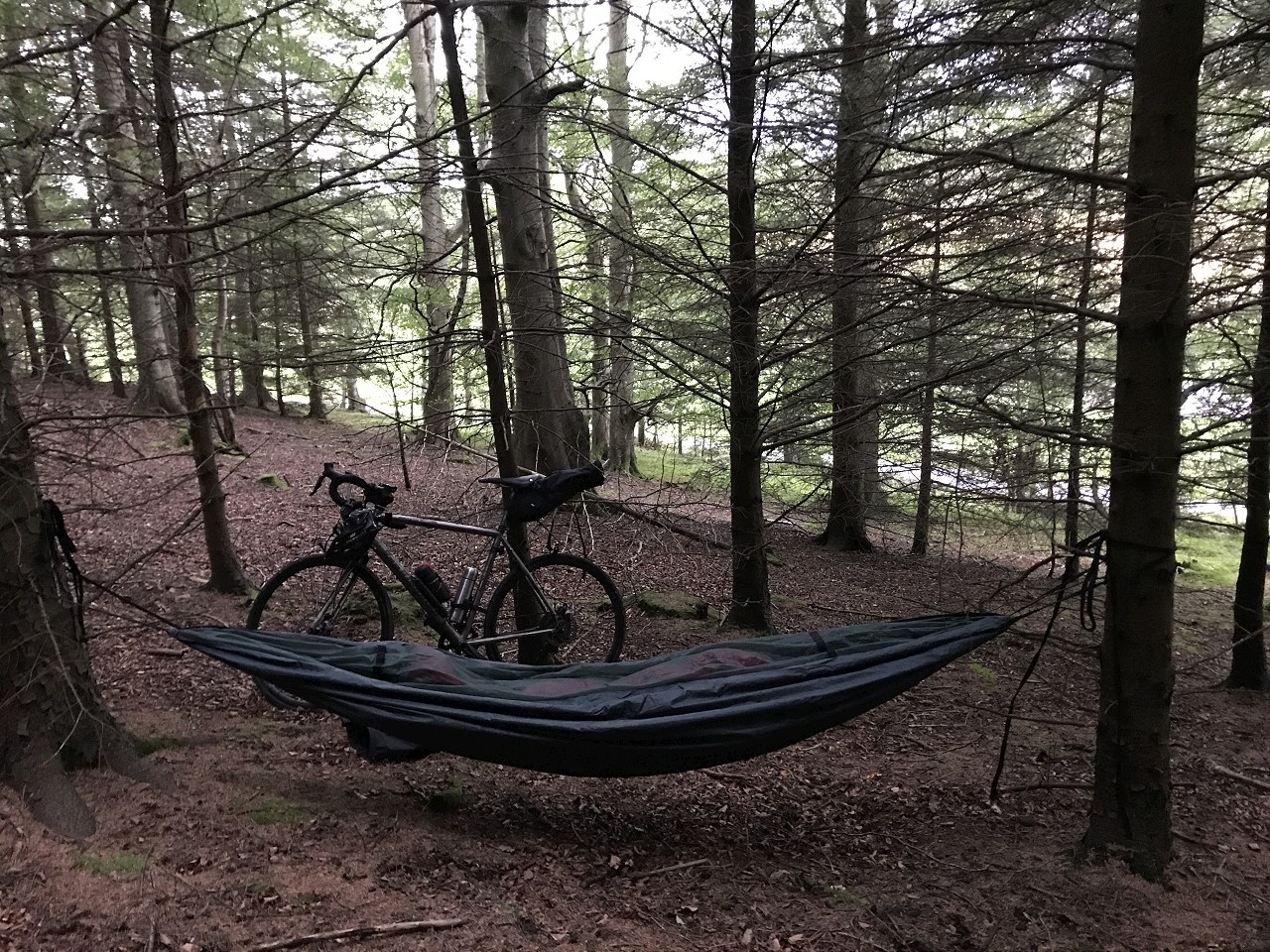 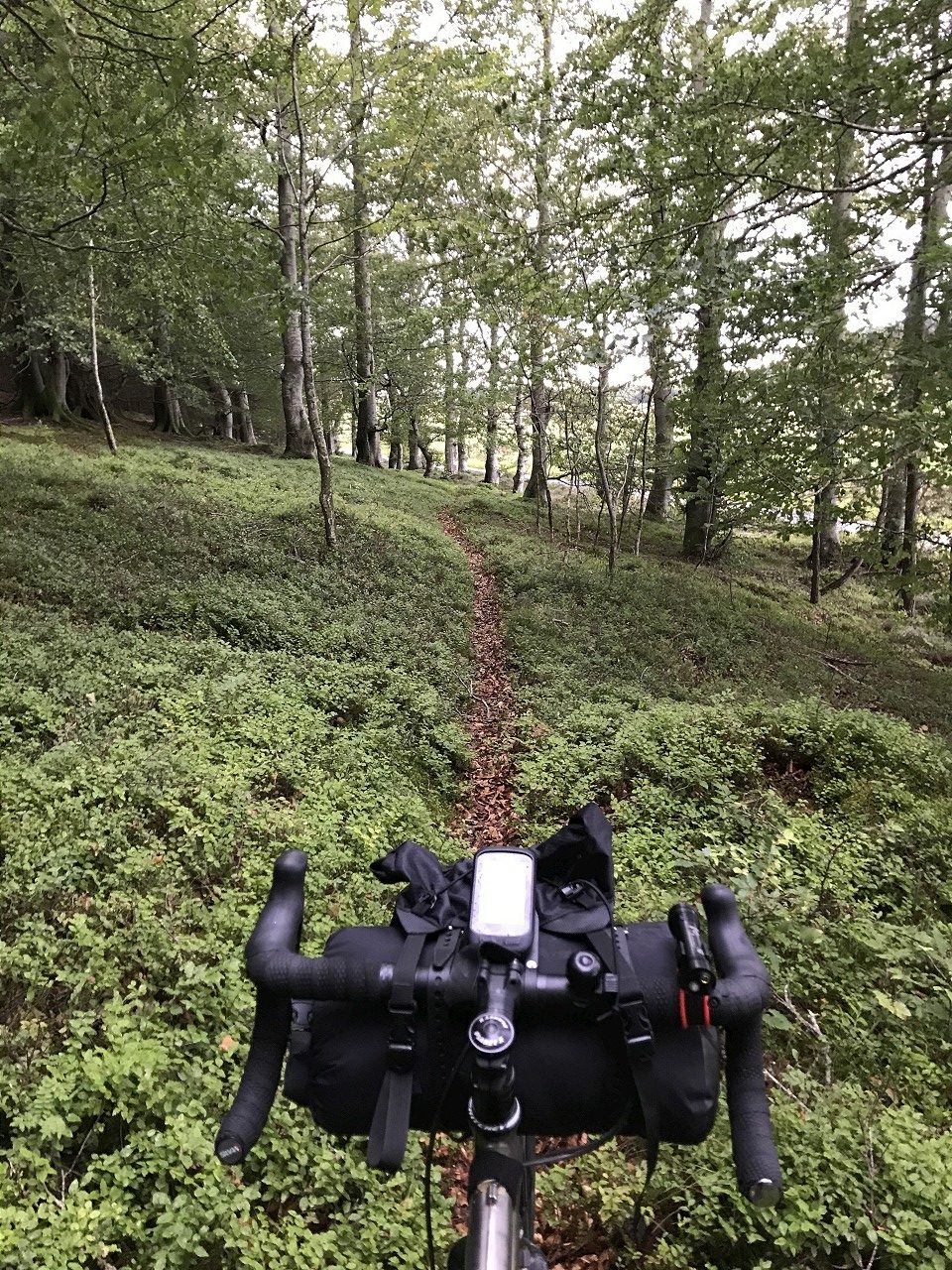 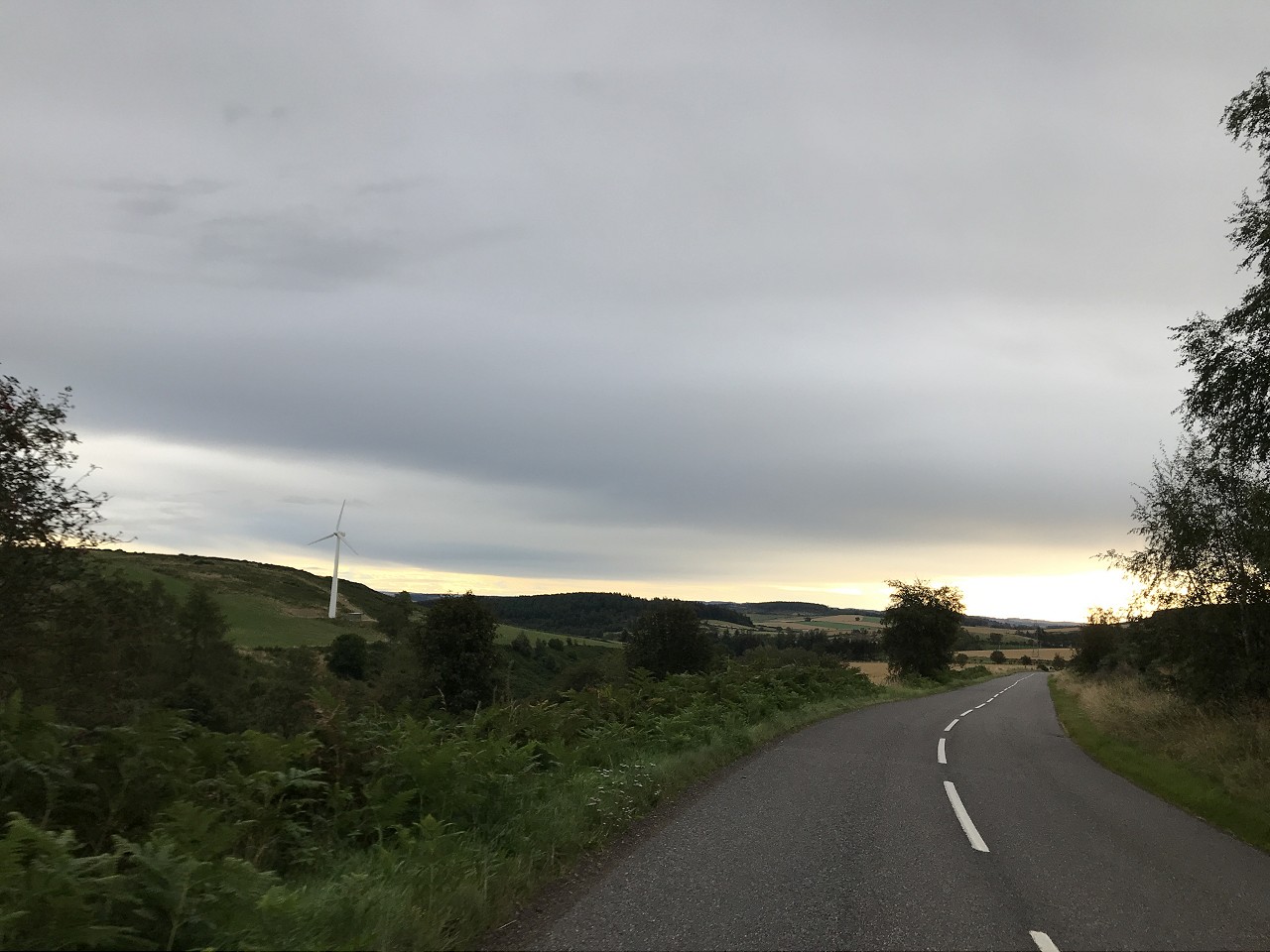 That puts me at 8/8 for this year and 20 in a row.
http://www.highlanddrifter.com
Top

There's so many decent rides that have piped up here since I last played out.

Me and Lee went and done the Capital Trail Monday afternoon - Thursday afternoon. Taking an extra day off work with the blessing of the Mrs, we set off about 11am.

Bike was really heavy, so there was a lot of this

I was convinced there were no midges whilst filling up

We decided to stay at a bothy on the route from Bikepacking.com - turns out to be a locked commercial bothy

Lee forgot his toothbrush, but managed to pick one up

Glentress freeride park was a hoot!

Was a great feeling to get into Edinburgh!

The Hunter wanted her feed too! The waitress told us to bring our bikes in as they wasn't serving out side. Legendary.

Dealt with my first ever tick...I must admit, I panicked