Well three days after mid summer as I was working on the 21st which was a pity as if I'd gone out on the 2st/22nd I'd have been roasted. As it was.....
It started well - after a day of sunshine whilst shouting at the computer I got away just after 4 with the sun still shining. Heading north-eastish seemed to be taking me to blue skies all round but behind a wall of black was building..... 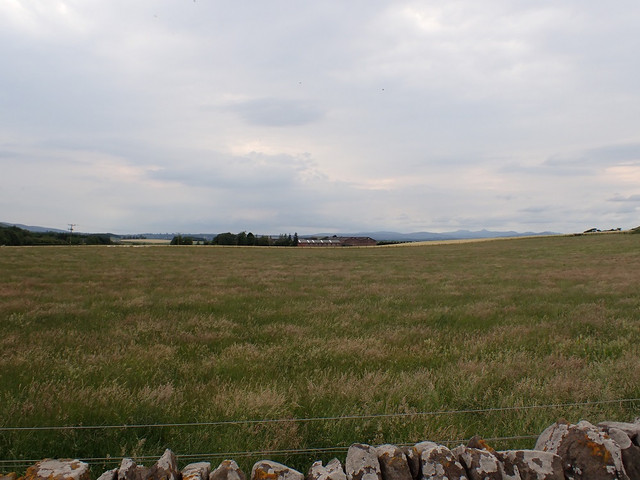 Looking across the wide vale between the Ochills and the Perthshire hills, the Trossachs in the distance.

I'd (as usual) ruminated on all sorts of ways to get to my friends place near Aberlour on lower Speyside for a BBQ. At one point I was going to do it in a oner starting early Saturday morning and bashing up the famously hilly A93 and A939 (around 125 miles) but in the end I went with a Friday evening / Saturday morning plan. I'd wanted to go via Perthshire and the Spey valley as this would give easier hills for the singlespeed but the forecast suggested it would be much wetter this way - a repeat of the torrential showers of my last tip up north. So A93 it would have to be (highest A class road in Britain) but with lots of options to get from Deeside to the Spey. 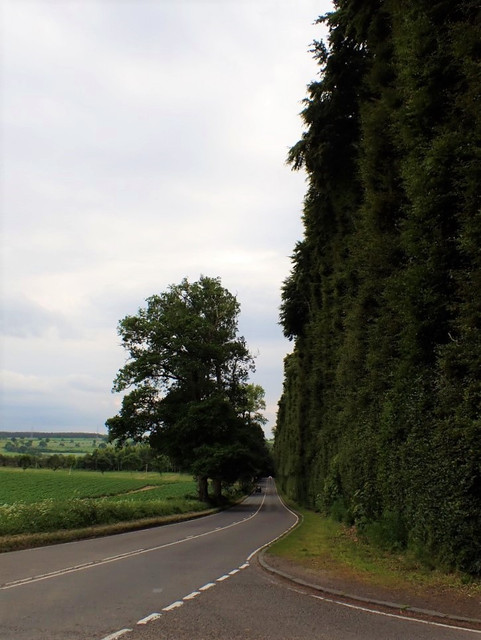 A lot of pleasant back roads, with a stiff following breeze, took me to Blairgowrie and an evening snack courtesy of the Co-op. This gave the clouds a chance to catch up and as I started the long, long climb to the Spittal of Glenshee, a few spots came in. This persisted all the way up the road. That said it was warm and the wind made this somewhat lengthy drag a breeze. The fab scenery helped - I'm usually motorised up here and on my first two passes by bike with the uni cycling club it was dark. Finally I reached the Spittal hotel, the clouds receded and the crux was revealed: The Cairnwell. 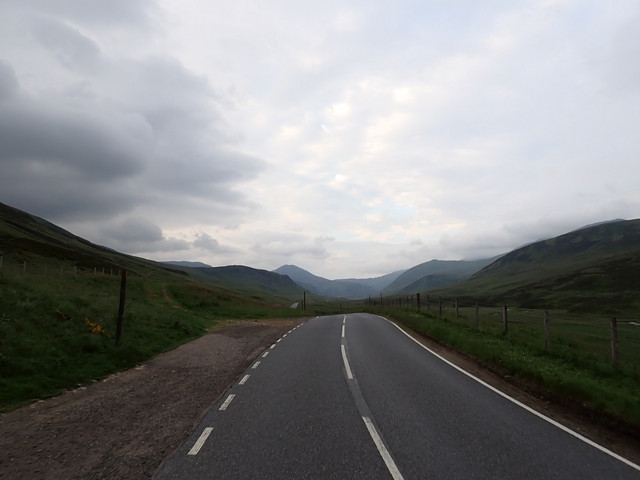 It's one hell of a climb - others may be longer and / or steeper but this steady 10% grade over 2k, after 30k of steady climbing and with a sting in the tail, has destroyed many a cyclist over the years. The sting in the tail is the last half a k where the gradient notches up to 12%. Again this seems trivial but after the effort so far it fair wrings you out, particularly on single speed. I figured I could walk it but managed to grind away at a steady 45rpm. The worst of it is that it's arrow straight and this makes the distance deceptive as it looks like only a couple of hundred metes at first, but just keeps giving... 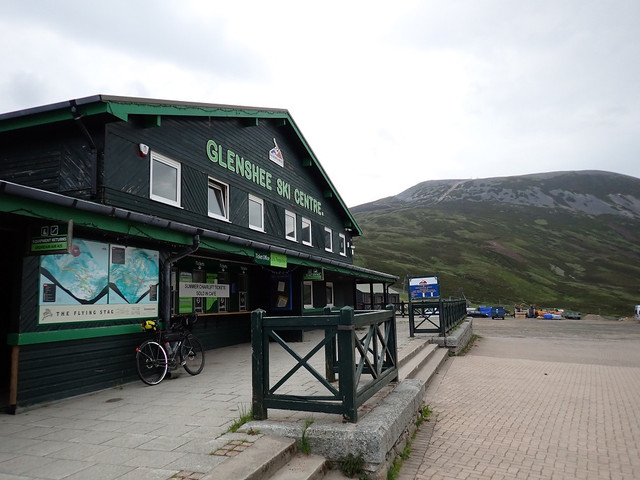 Finally the gradient eased and I cruised down to the ski centre for a breather. Looking north there was much in the way of blue and red skies, hinting at the forecasted nice weather for the next day. Behind the sky was also clearing somewhat so my next thought was a bivvy spot. It was coming up to ten so I'd made good progress but I wasn't in for riding beyond nightfall as I fancied a decent kip. The woods of QE2's back garden would offer shelter but I was determined to avoid a repeat of my mozzie experiences of the last two bivvies so figured somewhere a bit more open would be a better bet. I hammered down the descent and cruised along the flats of the Clunie water figuring that if I stopped along here, I could get breakfast in Braemar. A lot of road side camping goes on around here so I was going to be fairly selective but, as predicted, the huge numbers of folk doing this during the pandemic have largely disappeared to foreign climes. There were a few camper vans but on turning off the A93 onto the backroad there were only a couple of tents. I passed these and headed off the road to a level area, ideal for my needs. Up with the tarp and in sharpish as the breeze was dropping. It was 10.15 so I'd been going for 6 hours, 125k done. 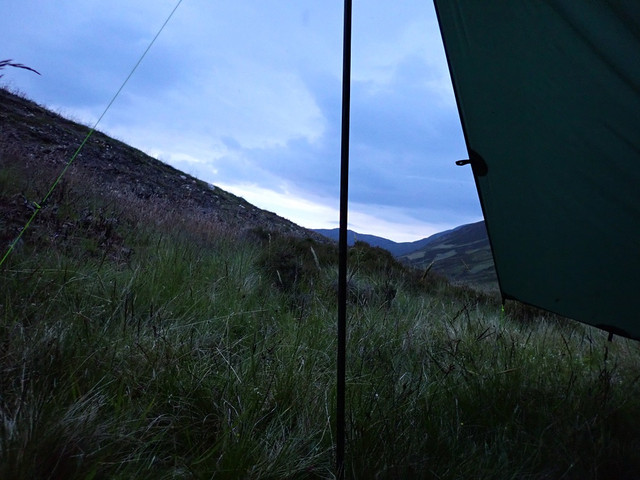 Well so much for the weather forecast, quelle surpise.... After sipping some whisky I turned in, only for a large rain shower to come through. These persisted over the next couple of hours so my sleep was interrupted and brief. At the beginnings of first light the rain eased but now the wind was on the rise - so much for the weather saying winds would be light and south easterly - this was brewing a south westerly gale! Then the rain came back on.

Oh dear - much as I love tarp camping, I've always been careful to use a sheltered spot when wind or rain was incoming. Here I was on an exposed space in the middle of a glen that ran directly in line with the wind. I shuffled about to make sure my bivvy bag was in the most sheltered bit of the tarp and tried to ignore it. Sleep came and went but eventually, at 6.30, the now gale and heavy showers were too much. I munched some food, got dressed, got packed up and got out of there. 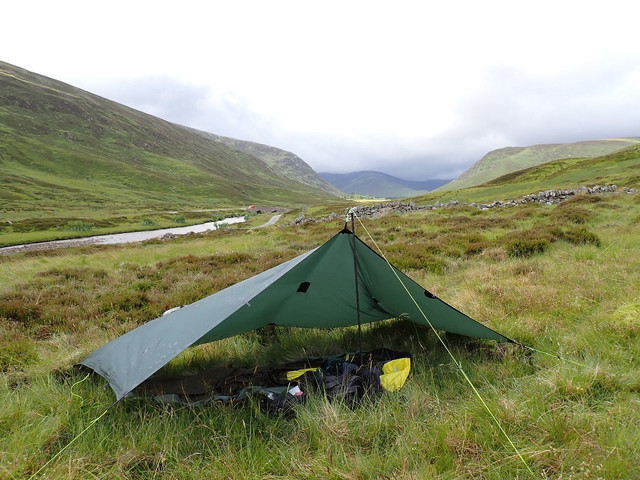 I'd actually remained dry, apart from some water that had splashed onto the bivvy bag from the tarp edges, and despite a fair bit of flapping, the tarp had remained in one piece. Best of all - no midges, no mozzies! Also, by the time I got going blue sky was breaking out ahead, it was warm and the wind would be behind me all day.

After a co-op breakfast, eaten in the Braemar visitor centre (actually an open shed that had I known was there would have been slept in!), I rolled out of town into clearing skies and hints of sunshine. I left the road at last for the fine track through the woods to Balmoral. Of course many bivvy spots were revealed and I suspect the wind would have kept the winged menaces at bay. Oh well.... 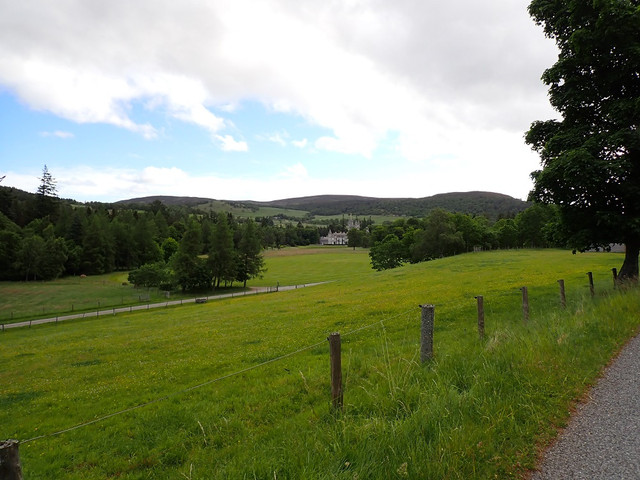 From Balmoral I left Deeside on another long and steady climb over to glen Gairn. I hit 68kph on the descent. Could I break 80 before the days end? Before my next chance of this was another long, steady and singlespeed killing climb. But the gale behind me took the pain away and I whisked up it in good order. 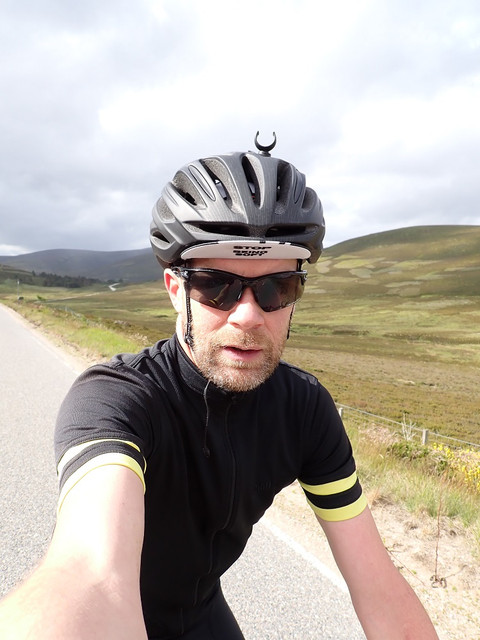 Grinning as I've got a massive descent to come
76kph was the best I could do before braking hard for the turn off to a nice section of Wades road that cuts a huge corner off the road. 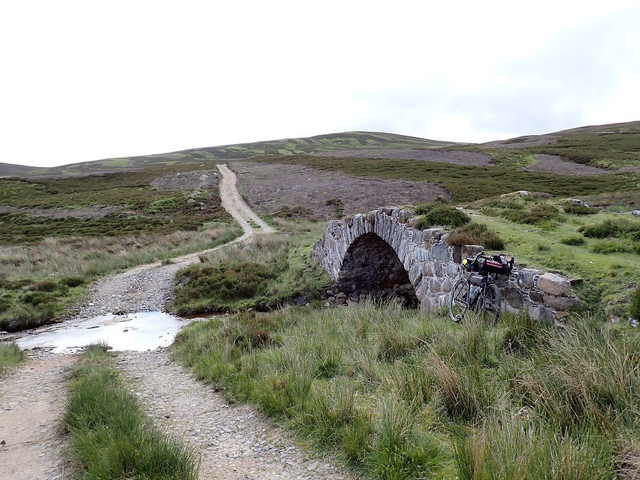 Rolling out back to the A939 I contemplated the Lecht Road that I could see climbing steeply out of the glen. There would be no way I'd get up this without a walk but the upside would be a chance to hit 100kph on the descent. But the alternative was a fine through route to Inchrory lodge in Strath Avon and a fine run down to Tomintoul. No contest, I've done the Lecht road before (and hit 100kph) so off I went up the glen. 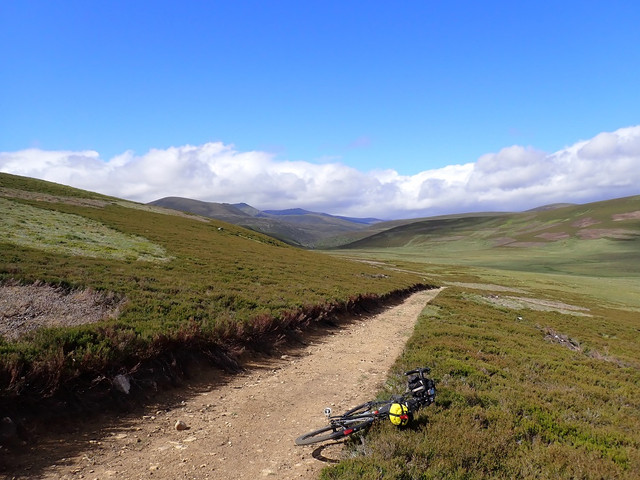 This is a very nice route. The wind caught me a couple of times, funneled into my face by the twists and turns of the glen but as I dropped down to the big lodge, and the mighty River Avon (a trickle!) it swung behind me and I barely pedaled all the way to Tomintoul and a fine late breakfast. My friends were actually at the nearby trail centre and Iona wanted to ride back to their house on the road so we joined forces for one of the easiest 27k of my life - a steady downhill and a blaster of a tailwind!

The wind and sun dried the tarp in about a minute as I snoozed in their back garden, then we had a fine barby which ended a fabulous ride. The best bit? After 215k of almost all tailwind, I was getting a lift home!
http://philsbikepacking.blogspot.co.uk/
Top

Good going on singlespeeding that lot!

The last time I rode the Cairnwell there was frost forecast for the evening so I bivvied in one of the extended doorways of the ski centre before whizzing down to Braemar for breakfast in the Fife Arms.
http://www.blog.scotroutes.com/

The last time I rode the Cairnwell there was frost forecast for the evening so I bivvied in one of the extended doorways of the ski centre before whizzing down to Braemar for breakfast in the Fife Arms.

I did wonder about that - there seemed to be somebody working in the engine shed though. There are also a couple of tin huts in the vicinity which I nearly had a look for (And should have under the circumstances!)
http://philsbikepacking.blogspot.co.uk/
Top

Do we now refer to you as Phil pop-eye' Clarke?

I was thinking how massive your forearm was in that picture.

I was thinking how massive your forearm was in that picture.

Definitely a distorted image....
Realty = Tyrannosaurus rex style arm proportions!
That said I've done a fair bit of mattock swinging this weekend, with more to come; so I might end up with some arm muscles at this rate
http://philsbikepacking.blogspot.co.uk/
Top